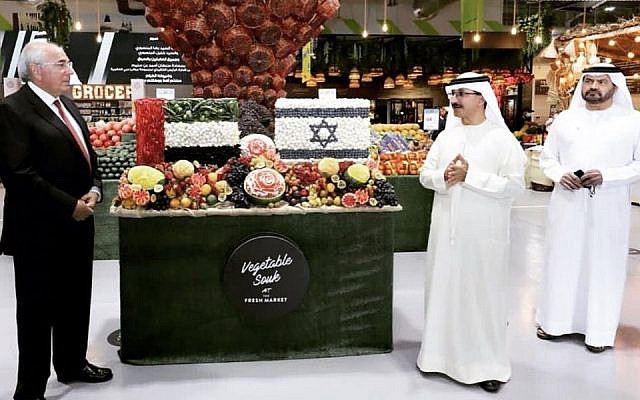 A fresh market in Dubai’s Ras Al Khor area ran the first ever display of Israeli produce in the UAE on Saturday.

Shlomi Fogel, Chairman of Carmel Agrexco, one of Israel’s largest exporters of agricultural produce was present at the event and expressed his delight over the initiative.

“We are excited to be part of the growing ties between Israel and the UAE. Together with our colleagues in Dubai, we are beginning to see the ‘fruits of peace’ today. It’s a fact that Israeli agriculture is highly advanced and we are confident that everyone will enjoy our produce,” Fogel said.

He added that the firm intends to invest in agricultural farms in the UAE, incorporating the latest innovations in agro-technology.

The Fresh Market located on Sheikh Mohammed bin Zayed road, near Dragon Mart is operated by the Dubai Municipality. The market has played a key role in raising Dubai’s position as a regional hub for the trading & sale of local & imported produce.

The opening event was attended by dignitaries including Sultan Ahmed bin Sulayem, Group Chairman and CEO of DP World; Essa Abdul Rahman Al Hashemi, Head at the Food Security Office, the Prime Minister’s Office; Mohammed Al Dhanhani, Director of Agricultural Development and Health at the Ministry of Climate Change and many other UAE government officials.

The efforts are also in line with Dubai’s drive to diversify the sources of imported produce in the UAE.

The UAE is one of the biggest importers of fresh fruit and vegetable produce. In 2015, the country was importing 21,000 tonnes of fresh produce per day. Most of these imports came from South Asia and Australia. The move will benefit the country because of the proximity and the speed with which the products can be transported directly to markets in the UAE.

UAE became the third Arab country after  Egypt and Jordan to formally normalize its relationship with Israel and the steps indicate the country’s readiness to fulfill its commitments.