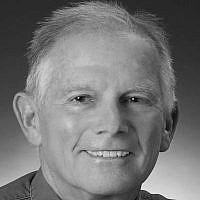 The Blogs
Joe Guzzardi
Apply for a Blog
Advertisement
Please note that the posts on The Blogs are contributed by third parties. The opinions, facts and any media content in them are presented solely by the authors, and neither The Times of Israel nor its partners assume any responsibility for them. Please contact us in case of abuse. In case of abuse,
Report this post.

In 1866, Lipman Pike became the first great professional Jewish baseball player when he signed a $20 a week contract to hold down the hot corner for the Philadelphia Athletics. Lip, as Pike was known, was a dominant power hitter who, in his 425 National Association and National League games between 1871 and 1881, hit .322 with a slugging average of .468. Accounts of those early games noted that Pike hit numerous home runs that soared beyond outfielders’ reach. When the popular Pike passed away prematurely at age 48, The Sporting News, baseball’s Bible, published a tribute that include these glowing comments: “Pike…was one of the few sons of Israel who ever drifted to the business of ball playing. He was a handsome fellow when he was here, and the way he used to hit that ball was responsible for many a scene of enthusiasm at the old avenue grounds.

Since Pike, many more Jewish superstars have excelled on the diamond. Most famous among them are Sandy Koufax, the Dodgers’ Hall of Fame lefty who’s the first pitcher to win three Cy Young Awards, and the only pitcher to capture the award when it was given to just one major leaguer. Koufax won pitching’s Triple Crown—wins, strike outs and ERA, in 1963, 1965, and 1966, and hurled four no-hitters, one of them a perfect game. Hank Greenberg is another Jewish baseball standout, and a World War II hero. Greenberg’s power statistics are on a par with Babe Ruth, Lou Gehrig, Ted Williams, and Jimmy Foxx. After enlisting in the US Army Air Corp, Greenberg rose to First Lieutenant, and was active in the China-Burma-India Theater. Al Rosen, a four-year World War II Navy vet and Cleveland Indians third baseman, is the only player to win both the Most Valuable Player, and the MLB Executive of the Year awards. Rosen, a successful amateur boxer with a vicious right upper cut who described himself as “one tough Jew,” unanimously won his MVP in 1953, and for his front office efforts that guided the San Francisco Giants’ from first to last place in 1987, was elected Executive of the Year.

In baseball circles, Koufax, Greenberg and Rosen are well-known. But the compelling 1923 tale about Mose Solomon, the “Rabbi of Swat,” blends the long-gone Class C low minor Southwestern League’s Hutchinson Wheat Shockers with early 1900 Jewish immigration to New York, the World Champion Giants, its manager John J. McGraw, his desperate, but ultimately futile search for a slugger who could match Babe Ruth’s home run power, and siphon off Ruth-crazed bugs from the hated Yankees.

In his book, “The League of Outsider Baseball,” Gary Cieradkowski wrote that when word reached McGraw that by September 1923, Solomon had blasted a then-professional record 49 homers, was hitting .421, leading the league in doubles, hits and runs scored, the Giants manager was convinced that the “Jewish Babe Ruth” would spearhead the Jints to financial success. Within the blink of an eye, the Giants paid the Wheat Shockers $4,500 for Solomon’s contract, and soon thereafter “The Rabbi of Swat” was riding the rail toward New York. But McGraw soon realized he had no place in the lineup for Kansas’ home run phenom. The Giants’ first base position, and its outfield was populated by future HOFers George “High Pockets” Kelly, Casey Stengel, Ross Youngs, and Hack Wilson. While Solomon rode the pine, the very vocal cranks demanded that the Jewish Babe Ruth be put into a game.

McGraw gave in, and on the season’s last home tilt Solomon hit a game winning double against the Philadelphia Phillies. Solomon got into one more game in 1923, and ended his season—and his major league career—with three hits in eight at bats, a .375 batting average. The Rabbi’s problem was, as scouts said, “He could poke’ em, but he couldn’t pick’,em,” a reference to Solomon’s 31 errors in 108 games in Kansas. Solomon was promptly dispatched back to the minors where he resumed his lusty batting prowess—seven seasons of .300 or higher.

When Mose realized his baseball days were behind him, he took up semi-pro football, and played effectively until injuries sideline him for good—a lucky break for him as things turned out. Solomon and his wife moved to Miami where he started a long, lucrative real estate business until his death in 1965.

Joe Guzzardi is a Society for American Baseball Research and an Internet Baseball Writers Association member. Contact him at guzzjoe@yahoo.com