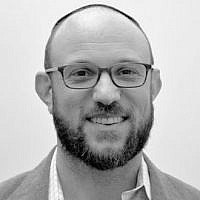 Tradition tells us the first thing we are to do after Yom Kippur is to hammer into the ground the first stake in building our sukkah. Defining a Sukkah might seem simple, however it’s anything but. I love the questions that roll in as my own Sukkah is built. All of my neighbors ask me—WHAT IN THE WORLD IS THAT?!

My favorite conversation was last year with my next-door neighbor Maria. Maria is a lovely and loving woman, a devout Catholic, intrigued by Judaism because her daughter-in-law is Jewish. She saw that big green “thing” on our deck. She opened her window and yelled out, “Matt! WHAT IN THE WORLD IS THAT!?”

I said, “It’s called a Sukkah, in Hebrew that means a ‘booth’.” It’s something we build it right after the Day of Atonement.”I should have seen it coming a mile away. If you say to a devout Catholic, in one breath, the words “Atonement” and “Booth,” you should not be surprised when they respond, “Oh, so it’s a Confession Booth!”“Not exactly,” I said.

I told her a little more. I said: “In the Wilderness, God made the Israelites dwell in booths.”

That’s the short answer I gave, not an uncommon one. But it hasn’t always been the answer to the question, “What is a Sukkah?”Our tradition has answered, “What in the world is that,” in many ways.

The short answer I gave was from Leviticus where it says:

all citizens in Israel shall live in booths, so that future generations will know that I made the Israelite people dwell in booths when I brought them out of the land of Egypt. (23:39-44)

In Leviticus, it’s a symbol of the memory of the Exodus.

But in the book of Exodus, ironically, it’s not about the Exodus!In Exodus 23, it’s called the “Feast of Ingatherings”:

…the Feast of Ingatherings [is] at the end of the year, when you gather in the results of your work from the field. (14-16)

The Feast of Ingatherings is not about wandering in the desert. It’s about being grounded in the land—it’s the end of our agricultural season, no wonder Sukkot begins on a full moon—the lighting’s great!And Exodus reminds us: be grateful to God for the things we have harvested.

The symbol assumes more and more layers of meaning, as our painful and dramatic history unfolds. We read in the Book of Nechemia that this Festival went ignored for most Israelite history. Sukkot was virtually unknown until Ezra the Scribe, in the 6thc. BCE, revived it. He was reading to the Israelites right after they returned to Jerusalem, after the first exile. They were assimilated, illiterate to the laws of the Torah, and Ezra had the weighty task of re-educating them. He would gather them all together, during the season of that Festival, and read to them the commandment to dwell in booths. They were deeply moved by his words.

So in this moment in our past, the Sukkah was the symbol of reconnecting with Jewish community and celebrating their identity! In their Sukkot, they partied – hard. The Sukkah was a party booth. And, it was also a sort of portal back into Israelite tradition.

So what do we have so far: 3 different booth definitions.

We’ve inherited all these. Now, it’s not unusual for a symbol to morph like this. Especially around Festivals, all of our traditions reform over time.

If Reform is a verb, and we are to Reform Judaism this year, what does it mean to fully “dwell in a Sukkah”—to be outside, in public space, looking at reality, dealing with the elements of society. If Reform is a verb, then the commandment to take our past with us into present day booths cannot be removed from the recognition of the VOTING booths that we enter in but a few weeks.

One might think that this kind of sukkah, this kind of booth, is altogether different. It’s politics. Church and state, let’s keep them separate. But as we learned from Rabbi Jacobson on Rosh HaShanah, and as we learn from the commandment to move directly from inside the sanctuary of Yom Kippur into the work of the real world outdoors, our tradition demands engagement with the real world. Our real world right now is in the Wilderness. Our real world right now is all about November 8th, Election Day.

Why? Because that is a booth that for the majority of Jewish history, we were not allowed to step foot into. The United States of America was the first country to offer our people full rights of citizenship. And we have never been as safe, as comfortable, as protected, as empowered—as capable of actualizing the very Justice and Compassion that we talk and talk and talk about throughout the 10 Days of Awe.

Our Prophets aren’t talking about justice and compassion just within our own walls—they demand that that we be an or lagoyim, a light unto the nations. That starts by believing that we have some good ideas for our polity:

Pretty good ideas. Ideas that those who loved us enough to pass them down to us never had the opportunity to realize with the power of a mighty stream. In America, we do. But nevertheless, many people are choosing not to enter the Sukkot of the Voting Booths. Often claiming that they’re dissatisfied with the Presidential choices on the ballot (as if that choice is the only one to make), they are choosing to stay home and “sit this one out.”

Well, there is simply no conscionable way to honor the rich history of Sukkot and “sit this one out.” There is simply no honorable way to inherit the history of disempowerment that has led to the atrocities of our past, and stay home on November 8th. Our society is in the Wilderness. In the Wilderness, God made the Israelites dwell in booths. The more folks we get to the voting booths, the more appreciation we show for the toils of our heritage.

I am not going to weigh in on which candidate is more righteous. I am not going to use this pulpit to endorse or denounce any candidate. It’s against our c3 commitment, and it would only distract from highlighting the Jewish values we take with us into Sukkot. Besides, this election we will vote not only on our leaders but also on ballot questions, important ones. What kind of a society do we want to live in? In Massachusetts:

In the Wilderness, God made the Israelites dwell in booths. Every generation has to decide for itself what it means to dwell in booths, and how can we connect this season to righteousness.

In the 1st century, Josephus, our first historian, if you will, revised the history of Sukkot, changing its symbolic power. He described the story of Ezra differently than the book of Nechemia. He said it was during Sukkot:

“[the Israelites] listened to the laws being read (by EZRA). They were troubled by the past, they were moved to tears…. and they learned how to be righteous for the present and the future. (Antiquities of the Jews 11. 5. 5)

In the Wilderness, God made the Israelites dwell in booths.

In this Wilderness, may the Jewish values our tradition inspire us to make the VOTING booth as well, a Sukkat Shalom, a place of righteousness “for the present and future.”