Could you imagine if every researcher working on medical advances,every inventor tied to our cellphones and apps and every legal scholar had worked hard in preparing in schools for top placements in educational situations only to be told they couldn’t attend a school because of a wrong background?

It wasn’t so long ago, issues of our religion made Jewish graduates at certain schools only a dream in America, and pre-Holocaust Europe.

This summer, Americans have “summer homework” regarding their thoughts and follow up actions regarding two recent laws on adademic admissions.

In New York, a law is pending in the State Senate. It already passed the New York Assembly. The bill relates to admission to a special high school in the city of New York. https://www.nysenate.gov/legislation/bills/. The bill was sponsored by Charles Barron, a African-American leader whose history of speaking out against Israel and standing up for anti-Semites like Louis Farrakhan has been making headlines for a decade. The bill puts race as the primary factor as the test to apply and get into an elite public high school.

Meanwhile, in Washington, DC, something quite different happened days after the New York City ruling.

An Executive Order was signed by President Trump on July 3rd. It reverses race as a factor in attending colleges and universities. The statement out of the White House said that it was abandoning Obama administration policies that called on universities to consider race as a factor in diversifying their campuses, signaling that the administration will champion race-blind admissions standards.

In a joint letter, the Education and Justice Departments announced that they had rescinded seven Obama-era policy guidelines on affirmative action, which, the departments said, “advocate policy preferences and positions beyond the requirements of the Constitution.” The message out of Washington is clear. The Department of Education wants colleges to consider race as little as possible, or, preferably, not at all, when admitting students.”

According to a published report from New York University’s Research Alliance for New York City Schools from 2015, admission rules based on criteria other than the SHSAT testing and attendance did not help African American students. In fact, their numbers of acceptance and success would decrease. This issue is testing moderate, “Blue-Dog” democrats within their own party.

As a Jew, as an educator, activist and journalist, I tend to agree that academic achievements help everyone. It also helps Jews build ties to other minorities in communities, the workforce and friendly bonds. 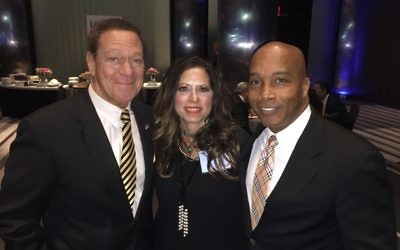 For three years, I have been working on improving Jewish-Black relations with Kevin Jackson, of The Black Sphere. According to Jackson, “Schools pretend to do minority students a favor by lowering the standards. A friend of mine who is a cardiologist told me the story of his brother. He failed his first Physics test at Princeton. It was one of three tests, and essentially guaranteed that he would fail Physics that semester. Instead of complaining, my friend’s brother asked the professor to tutor him. He further asked the professor that if he aced the next two exams could he get an A in the class. The professor agreed, believing there was no way the young man would ace the next two tests. He did. And he went on teach Physics at Princeton after graduation with honors. That is a story that is a practical impossibility today. Because Leftists have stolen the initiative and drive from minority students. What a pathetic legacy for Leftists. They’ve stolen the best qualities from a formerly proud people.”

Darrell Scott, Pastor and CEO of the National Diversity Coalition for Trump, recently discussed the admissions issues in New York and Washington with me.
Scott voiced his concerns about what is going on in New York while applauding President Trump’s actions. “It is a mistake the left makes time and time again equating underprivileged students and their families with underachievement,” Scott said, adding, “By lowering the bar, the New York mayor and school’s chancellor disqualify those, including minority students, the ability to achieve and even overachieve.”

Scott points to polluting the entire workforce. “President Trump’s initiative helps all minorities in the workforce. This is proven by the job numbers released monthly. By 2020, Trump easily has the ability to get 40 percent of the Black vote for rewarding them for diligent work ethics and not penalizing anyone by their race or the color of their skin.”

Former football player, best-selling author and outspoken activist Burgess Owens also applauds Trump’s actions, while finds the NYCDOE attempts to diversify classrooms troubling. “We are known for our rap, our music and our football talents. We are known for our physical attributes, many of us prefer to be known for our academic attributes,” Owens stated, adding, ” We didn’t ask for affirmative action, and it hasn’t helped us. Personally, I am sick and tired of watching the color of anyone’s skin be a significant factor to initial acceptance. It doesn’t help when it is time to pass tests, graduate, apply and fulfill meaningful jobs. Only academic achievement and hard work does.”

“A Nation of Freedom, Hope and BIG Dreams is represented by world’s most beautiful colors RED, WHITE & BLUE. What an honor and blessing to be called “an American,” Owens said.

I look to Israel, with its large Ethiopian Jewish population for some guidance on these latest actions in NY and DC.

Education is a nonpartisan issue that needs bipartisan support.

Cindy Grosz can be reached at cindyscorners@gmail.com.