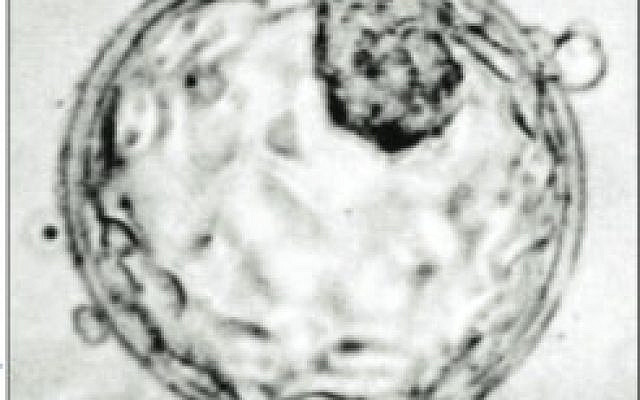 16 cell human pre-embryo (the blastocyst) just prior to freezing

Last week I attended an invitation-only roundtable on what to do with the surfeit of abandoned pre-embryos in Israel: It is estimated that we have more than 300,000 fertilized eggs currently residing in cold storage – with no one wishing to claim or use them. Given that Israel has the highest number of per capita rounds of IVF in the world, it isn’t surprising that this number is by some estimates more than three times higher than in the U.S. – which is also grappling with the problem. Some put the number of American pre-embryos dwelling in deep-freeze at more than a half-million, or even higher. (Pre-embryos is the term used to describe the fertilized egg (or zygote) during the first two weeks of its existence. After that, it officially becomes an “embryo” until its 8th week, and then it’s called a “fetus”).

The symposium, sponsored by the Van Leer Institute, hosted representatives from the Ministry of Health, physicians, sociologists, law professors, stakeholders, and bioethicists. At the end of the four-hour discussion, a few things were apparent: The cost to maintain these entities was high (estimated to be 1.6 billion NIS over ten years); the donors of the genetic material who had no further need for them didn’t want to make the hard decisions regarding their future – abandoning their genetic material and decisions relating to its future to the wisdom of IVF facility operators. Few others in the room wanted to take responsibility for the future determination of these pre-embryos either. IVF facility directors wanted to clear their shelves – but were frightened about actively disposing of them, mostly fearing liability. The most important outcome, however, was the fact that avoidance was the prevailing way of dealing with the problem- at least in Israel.

In the US, the issue has reached the level of being raised in the popular press and is a topic of concern, apparently, of all clinics. Alas, America has come up with no workable solutions either. It’s institutionalized paralysis world-over.

When I was a child there was a cartoon-book teaching etiquette. The illustrator, Maurice Sendak, drew a child in an unusual situation, say backing into a crocodile on a crowded street, and then the author, Sesyle Joslin, asked, “So what do you do, dear?” Here we have a situation akin to bumping backwards into a crocodile. If we don’t resolve the question soon, we will be overrun by these blastocysts, which is what the pre-embryo is called at 4-5 days post-fertilization, the stage at which freezing – or cryopreservation – occurs.

This is but another example of technology running away with us – we have proliferative use of a new technique without forethought of the consequences. When the cryo-preservation technique of freezing embryos was first perfected, sometime in the 1990s, the euphoria incident to prolonging the ability for genetic parenting was overwhelming. At that time, oocyte (egg) stimulating hormones were designed to stimulate as many eggs as possible, with fertilization of multiple embryos being the objective – as many embryos “failed” during the thawing process or didn’t survive uterine implantation or gestation — and backups were needed. Today, with improved techniques, the convention is to fertilize fewer embryos than before, but still, we are creating more embryos than could possibly be used – just in case. And so, the problem just mounts as we struggle to devise some solution.

To be sure, when the technology was conceived there was a greater array of options available for use should the donors decide they didn’t want their fertilized gametes: They could be donated to parentless couples or they could be used for research. But as time progressed, improvements in IVF technology allow more eggs to be fertilized, compounding the problem. Today, through techniques such as ICSI, couples who once had trouble fertilizing their eggs are happily parenting children, and hence there is less need for embryo donation. As for research, well, the need for that’s much lower, as well. Laboratories now use cultivated stem cells – which obviates the need for the pre-embryos.

So, as time goes on, more and more embryos are fertilized and go unused, taking up space in cryopreservation chambers and costing society more money in their upkeep. And the frozen blastocysts can apparently survive for decades. We don’t know what to do about this mounting problem, nor do we even have a clue how to go about figuring it out.

Legal theorists have conceptualized possible ways to deal with the problem, but most deal with ownership disputes between gamete contributors in the case of divorce – like the controversy I discussed in my post about the Embryo and the Agunah. The legal community categorizes the pre-embryo as either a pre-person (which conflicts with the right to abortion, and hence is often rejected) or as property; neither approach being satisfying to lay folks – or as some new type of hybrid entity, which does nothing to move the dilemma toward resolution.

In actuality, the pre-embryo is not ripe for uterine implantation. But even this less humanized concept was considered by conference participants too emotionally-laden to serve as a basis for general discussion. Instead, some time was spent deciding on whether we should instead call the entity a “fertilized egg,” to mute emotional reactions — as if reaching consensus on terminology would provide the answers. To be strictly accurate – and more clinical — at this stage, right before the decision is made to freeze – we are dealing with a 16-cell organism or blastomere, technically called a morula ( a little mulberry) which a day later matures into a blastocyst. And it is these little matured mulberries that people don’t want – and yet don’t want to throw away.

Now, if these were ordinary mulberries, we might label the proprietors “hoarders.” But in this case, the experts have sounded in. The American Society of Reproductive Medicine assigns a right of special respect to this entity, which perhaps more closely coheres with Israeli sentiments expressed by some at last week’s meeting – that the pre-embryo is a “potential person,” and hence cannot be destroyed.

The major problem with housing these matured mulberries or blastocysts (and I am talking about entities that gamete donors either actually abandon by failing to pay for their upkeep or ignore requests for directives for future safe-keeping), is that it is costly. Continued cryopreservation costs between $500 and $1000 a year in the US. The tanks take up space, and room inside could be used to house other embryos whose gamete donors genuinely want to foster into children.

Attempts to resolve the impasse of the abandoned blastocysts, while commendable, are illusory. In Israel, government advisories and policy directives require payment for upkeep after a certain time. In America, that’s part of the initial contract. However, in both countries, once that time expires, IVF proprietors are leery about destroying “the mulberries.” Some fear legal ramifications, but that is easily resolvable by carefully drafted legislation. Most are morally conflicted. Or so they say.

The schizoid nature of the ambivalence is obvious. For example, just look at one solution proposed at the conference: providing for destruction of the pre-embryo after its egg-donor reaches the age of 54. Why? Because that’s the age when prospective mothers in Israel cannot obtain government-funded IVF. And so because she couldn’t have an IVF child anyway (at least not via the Israeli health basket), it would be acceptable to destroy the embryo.

The logical inconsistency of terminating the pre-embryo’s status as a potential person — just because its egg-donor reaches the age of 54 escaped the participants.

Here’s another hint of the internal conflict of the decision-makers: failing to recognize that if a prospective parent refuses to pay for upkeep of their little mulberry or won’t respond to requests regarding its safekeeping, the gamete donors aren’t relating to the frozen blastocyst in any manner resembling the respect official medical bodies have conferred on it. In short, there is a huge disconnect here between the medical, legal and lay sectors of society.

It is not surprising that gamete donors don’t want to actively decide to destroy their genetic material. Having the decision made for them by the authorities likely would be a welcome solution – the same way parents of Jehovah’s witness babies refuse to allow transfusions for their children, but are quite overjoyed for the State to come in under the doctrine of parens patriae, and make that decision for them.

But, we find the State is also reluctant to act. And here, too, we find the State’s position schizoid. Israeli law on abortion is one of the most lenient in the world. For a country that provides few obstacles to legal abortion, to wish to protect the blastocyst in frozen custody– as a potential person — is rather intellectually dishonest. But, worse, the money spent on preserving a 16 cell “pre-person” could be spent on an actual preemie needing sophisticated and expensive care – or even to assist its overburdened mother. To deprive a real person of the benefits of those resources because of moral stirrings by “the authorities” seems almost cruel.

First, we can use this conundrum as a paradigm for decision-making in the age of new technologies which affects the essence of humanity. We are sure to confront similar problems as gene-editing or sophisticated IVF procedures are introduced, perfected or enhanced. We need to recognize potential problems before these technologies are introduced not after and design a way of addressing them.

2. We also need to be self-aware. We should sensitize ourselves to illogical arguments made under the guise of the comfort of doing nothing. Morulas and blastocysts are not pre-people, at least not legally – neither the US nor Israel. That is incontrovertable. Jewish law provides that animals are also deserving of respect. Special rules requiring greater respect for “potentials” – which inure to the detriment of already existing humans are harmful to society.

3. We can construct some methodology for resolving these issues, noting that the voice of the consumer is not being recognized by the decision-maker, and provide for better discourse and dialogue between ethicists and people for whom the ethicize.

4. Cost-benefit analysis is one objective methodology for decision-making. Why it has been overlooked in the context of surplus blastocysts is incomprehensible. A PR program that would promote the use of monies saved from unnecessary cryopreservation for preemies, might even convince the naysayers.

And so dear reader, in the spirit of getting a discussion going: what say you?