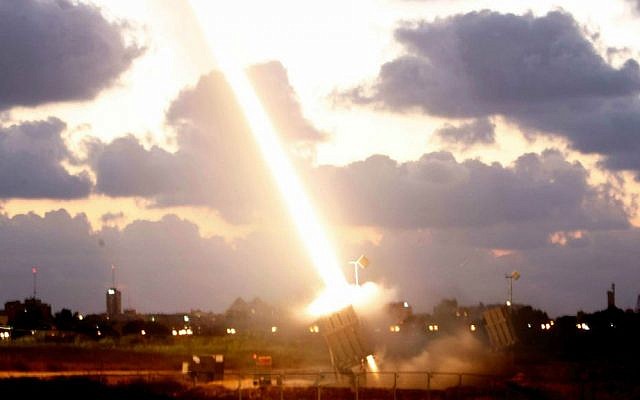 Last night was our Purim party on Kibbutz Nirim. Although the official holiday isn’t for a few days yet, non-religious Kibbutzim celebrate all such holidays on Friday nights, so that people can party hard and sleep in late on Saturday. In the early evening, as I was walking through the community trying to finalize my Purim costume in my mind’s eye, I heard the Imams on the loudspeakers from the blue mosque with the tall minarets that were recently rebuilt, (taller than before they had been destroyed for being used as a sniper post and for storing weapons during Operation Protective Edge) in the Gaza Strip less than two kilometers away, calling their faithful to prayer. The was unusually loud tonight. I guess we were downwind. The resonance of prayer, which should be associated with piousness and peace, triggered the re-visitation of a memory from not all that long ago.

The first time I ever saw Iron Dome in action, real time, was Purim a few years ago, while we were having a Purim party on Nirim. It caught my eye while waiting near the glass door leading out to the balcony, in what had become the wings of our temporary stage erected in the dining room for the occasion. I remember that we weren’t even sure if we would be allowed to have the party — because of the frequency of rocket fire at the time.

I was waiting for my cue to go on stage, looking out the glass door. I saw a light in the sky to the east. A friend was outside talking on his cellphone, oblivious to what was happening beyond him. The glowing spot was eerie – it was like an other-worldly, floating ball of light. I couldn’t quite wrap my head around what I was seeing. I motioned to my friend to look at the strange phenomenon.

He lowered his phone.

And then like fireworks off in the distance, we witnessed the flash of two tiny luminous spheres pulverizing each other, and heard the muffled blast of explosives and metal colliding.

It was frightening. Yet it was wonderful, at the same time. Because it was clear to me that had Iron Dome not intercepted the rocket, it could have reached its mark — Ofakim — a city 20 kms away, with few shelters and little time to reach them.

Fact One: Purim, for some reason, has more than once been a period of escalation of hostilities.

Fact Two: So much so (re: Fact One) that children from Nirim made a movie about it back in the spring of 2014. Before the horrible war that rerouted the personal histories of all of us here in this community. Before some of those who participated in the movie lost their fathers. Before the father of some of them got his legs blown off. Before the “grandfather” in the movie was seriously wounded by shrapnel from a rocket and almost died. (And WOULD have died, had not the army medics been seconds away from him at the time.) Before ALL of the children who participated in the movie were traumatized by a summer of having their life routines suspended as they became refugees for an undefined period. “The Balloon” won awards in an international children’s film competition in 2014.

Fact Three: We do not have Iron Dome to protect us — because we are too close to the border. As it has been explained to me by a military expert, a rocket needs to reach a certain height for the Iron Dome to shoot it out of the sky. The short distance rockets that are used to attack my kibbutz are shot from so near the border in order to reach us, that they don’t reach that height. The military R & D are working on a different device called “David’s Sling”, which I was told is for shorter range rockets. However now, after checking it up on Wikipedia, it says the opposite: that Iron Dome is short range (4-70 kms). In any case, we are less that 2 kms from the border, hence nothing covers us.

Fact Four: We do not have Iron Dome to protect us — because Iron Dome here is not “cost effective”. I know it sounds bad (and it IS kind of ruthless) but each missile that is fired from Iron Dome costs at least $50,000. When it is shot at an urban area with multi-storied buildings and dense population, the damage it prevents and lives that it saves, is worth it. In a rural area (like kibbutz or moshav communities like mine on the border) where the Hamas rocket would not be downing any high rise apartment buildings and the population is relatively sparse, it is deemed not “cost effective” to shoot that much money into the air, when the damage to structures on the ground and the threat to human lives, is seemingly less likely. (Despite the fact that at least three civilians – one of them a young child – lost their lives in the Gaza Envelope communities during that summer of violent explosions, and others were seriously injured.) The tracking system knows exactly when a rocket that has been shot at us, is going to explode in a populated area or not, which is why you often hear that a rocket was shot into Israel, but Iron Dome was not launched. 99% of the time it is because the system detected that the rocket would explode in an “open area” (which could be an open field, but it could also be a swimming pool or a hot-house). Those are the instances when the news channels report that “the rocket fell in an open area; no damages or injuries were incurred”…. which is my other peeve, but I’ll save that for another time, if someone here asks ;-).

Fact Five: Because we do not have Iron Dome, for the reasons stated above, the government of Israel built safe rooms made of thick, reinforced cement which, from experience, can withstand a direct rocket hit (those types of rockets that have been shot until now, at least) on each and every residential structure, within 4 kms of the border, starting in 2011. That protective sash has since been widened to all those communities within 7 kms. Exactly for that reason: because the Iron Dome does not cover the closer range. So it’s not that our government is not investing in us, or doesn’t care.

Fact Six: If Hamas cared for their citizens one tenth of the amount that the Israeli government does, they would build protection for the Gazans…. or homes and schools and hospitals, instead of investing all their money in terror attack tunnels 🙁 )

Fact Seven: Readiness is important, and as the military expert from ancient Rome said: “If you want peace, prepare for war”. But wouldn’t it be more “cost effective” for everyone, on both sides of this bloody, endless, senseless, stalemated conflict, if our governments invested a fraction of the effort that they put into building all the defense and attack systems, in achieving long-term diplomatic solutions, instead?

Fact Eight: Purim 2017 is less tense. Much less than it was that year. Yet we still know – those of us who live on the border – that holidays are prime dates for attacks, and violence could ignite again in the blink of an eye.

Enough “facts” for now, it’s Purim, after all. Leave us carry on our merry ways in Lala Land, for now. While we still can. While it’s still quiet.

Wishing everyone a joyous, peaceful Purim — to all those on the border, and around Israel, and the entire Jewish world. 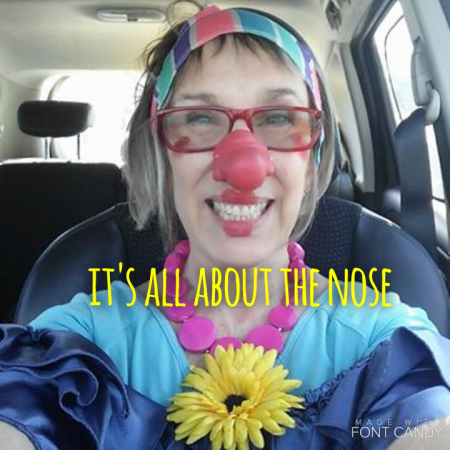 It’s All About the Nose

Please note: I originally wrote this for a post in the FB group I moderate Life on the Border. However it turned into something more than that, so I have incorporated the answer to a question I got there, and have written it up as a blog post, in hopes that more people will read about our lives here on the border with the Gaza Strip.