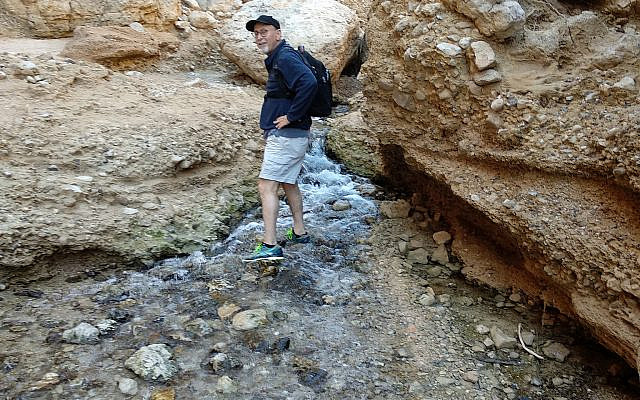 Near the southern end of the Dead Sea flows a small stream called Ein Bokek. In ancient times it fed a prosperous oasis, whose aromatic spice farms took advantage of the unique local climate. A Roman fortress towers above the northern bank of the stream, testifying to the strategic significance of the area during antiquity. In the twentieth century intrepid hikers, who wanted to try something beyond the celebrated waterfalls of Ein Gedi, walked through the little stream, and took a cool dip in the pools, often getting a glimpse of ibex (wild mountain goats) or hyrax (rock badgers) and filling their canteens with pure spring water.

The water is polluted and undrinkable, the animals are gone and the aquifer that feeds the entire spring is basically a chemical dump. Two companies located in the plains high above the canyon to the west, Rotem Amfert (producer of phosphates, fertilizers and phosphoric acids) and Dead Sea Periclase (processing magnesium oxide flame retardant), both daughter companies of Israel Chemicals (ICL), were stymied by the challenge of how to dispose of their waste water. The solution throughout the 1990’s was simply to dump the highly toxic, and measurably radioactive, effluents into giant ponds and natural holes in the ground. Gravity and porous limestone being what they are, the chemicals had to go somewhere, and that somewhere, unfortunately, was the Judean Aquifer that feeds Ein Bokek.

All is not lost, however. I have often spent time at Ein Bokek with tourists from abroad, but recently, I was privileged to take a stroll through the stream with a local hero, Professor Alon Tal of Tel Aviv University. Tal is a man with a mission. The stream was lovely, there were still reeds and caper bushes lining the canyon, and one could safely take a dip in the pools. But Professor Tal periodically encouraged me to taste (and spit out) the foul-tasting water through which we were hiking, and pointed out that not only were there no ibex or hyrax, there were not even insects among the bushes. Woe unto the nature walk in which one is not troubled by even a single fly.

Alon Tal is suing the two companies to restore the spring and pay damages in the largest environmental class-action suit in the country’s history. As it happens, I agreed to join this action as a plaintiff almost two years ago. As a tour guide, I represent a sector that has lost a national treasure because of the greed and skewed priorities of these companies. My involvement is a symbolic gesture of solidarity. The heavy lifting is being done by Tal, along with a dream team of leading academic hydrologists, ecologists, economists and a diligent environmental law firm (Levinson-Dror). The penalties, should the court choose to award them, will go to an environmental fund with the aim of cleaning up the stream, the spring and (if possible) even the aquifer.

One can look at this as a tragic tale of unchecked industrial pollution or an inspiring story of one angry citizen’s gutsy tenacity. It is, of course, both. Tal, a lecturer in public policy and a peerless engine of environmental activism, is a bald, gray-bearded, Israeli Erin Brockovich. He has no funds at his disposal and no political clout and he is taking on large, wealthy, powerful industrial interests, because someone has to.

This kind of activism is not unique to Israel. It is, however, a country that lends itself to such a mission. The love of hiking in nature is universal here, transcending class, ethnicity, age and political party. Environmental protection is a natural outgrowth of this passion. The judge who will preside in the case probably hiked through the Bokek Stream with his class trip as a child and even the owners of the chemical companies that are at fault probably camped there with their youth movements as adolescents.

Let us hope that the judge, and perhaps even the polluters, remember their childhood trips, see the justice of the case, and find a way to cooperate with what, I imagine, everyone agrees would be a win-win for the country and the ecosystem. I would be more than happy to take all of them and their families on a beautiful hike through a clean, healthy Bokek Stream. Soon, and for many years to come.