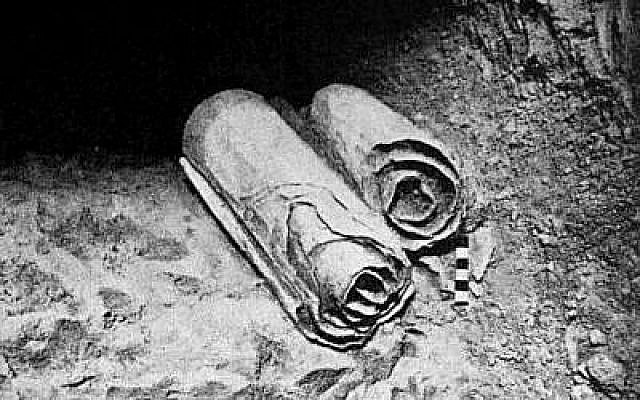 Two scrolls from the Dead Sea Scrolls lie at their location in the Qumran Caves before being removed for scholarly examination by archaeologists. (public domain via wikipedia)

This week as I was giving a class on the archeology and history of the dead sea scrolls, I presented one of the 2000-plus-year-old pieces of parchment used in the times of the second Beit Hamikdash–so old that when spelling out the name of Hashem they would spell it out in the ancient Hebrew letters we know from 3000-year-old archeology. As I read the words out loud from this unusually clear parchment, I read the words “Le’David Baruch Hashem Tzuri–Of David. Blessed is the Lord, my Rock, Who trains my hands for battle, my fingers for war. My kindness and my fortress, my high tower and my deliverer, my shield in Whom I take refuge, Who flattens peoples beneath me.” (Psalm 144)

As I was reading it, I was suddenly deeply moved as I recalled it was the same chapter of Tehillim read in a beautiful tune at the Jewish Center and many Ashkenaz communities after Maariv at the conclusion of Shabbat.

I thought of this chapter of Tehillim that surely played a central role in the lives of Jews more than 2000 years ago, through the many centuries in Europe, all the way to this day in the heart of Manhattan. I thought of the contrast between the almost unnoticeable cave on the side of a cliff in the Judean desert in the Kumaran region, where the only way to survive was because life was so scarce and unthinkable that one could go unnoticed, and the bustling environment of Manhattan. The contrast could not be greater. Instead of cliffs and dryness, tall buildings, streets teaming with people, and people going almost unnoticed because there are so many others here. I thought of the Jews in Ashkenaz singing this very same mizmor in every generation, through times of prosperity and unthinkable tragedy.

Little did I know the story did not end there.

Looking to listen to the tune, I came across the tune on Youtube, which had an ancient Jerusalem Sephardic rendition of the tune; as I listened to it, I realized how awfully similar–if not identical the turns were. Looking into the matter a bit more, I found a book (named Tashi Le’rosho) written by Rabbi Pinchas Zabichi, the chief rabbi of the Iranian community in Greatneck, quotes the book Krach Shel Romi, written by rabbi Yisrael Chazan of Jerusalem in 1876, who notes with astonishment that despite tunes of Ashkenazim and Sephradim being so different, this tune for Le’David is identical in Jewish communities spanning from Asia to Africa to Europe and beyond. He notes in his own name and in the name of others that the tune is a rhythm of war, a military march.

I was reminded of the time I heard from Ezra Yachin, or as he was known in the pre-state underground, Elnakam, how when they would go out to their operations, fighting for the young Jewish state, they would recite these words by hearing “hamelamed yadai lekrav, etzbe’otai lamilchama.” I thought to myself of the famous Israeli poet, Uri Zvi Greenberg, who fled Poland in 1939, two weeks after the Germans came in and lost his entire family to the Nazi hate machine, and wrote a poem titled Kodesh Hakodashim. In his poem, he fantasized about what became a reality for us. He dreams of a day he can go to pray in the cave, which is the grave of King David, where he will say LeDavid Baruch Hashem Tzuri and always make sure to fight for the Jewish people. Greenberg then famously speaks of the time the nations might all turn their weapons into plows, imploring his child, a soldier in the Israeli Defense Force, not to let his guard down, as the Holocaust has taught us of the vulnerability of the Jewish people even when living with those who seem more civilized than ever before.

In this week’s Parsha, the word “Shachach” to forget appears no less than five times. Moses sees the Jewish people about to go into the land of Israel, and his greatest fear is that they might forget. Moses is afraid that they might suffer short-term amnesia and long-term amnesia. He warns against both. Long-term amnesia: the fear that the rapid intoxication of materialism and indulgence might inflict on us the moment they enter our bloodstream. With material success comes immediate challenges that often lead us to forget where we came from. As a child, I would have a hard time making sense of the stories about people who lived in abject poverty in Europe and still managed to keep Shabbat, while few were able to afford to keep Shabbat upon moving to America. Too often in our history, the gaining of access to social status and material success has led Jews to abandon their faith despite all the education, knowledge, and Jewish pride that they might have had.

Seventy-one years ago this week, Rabbi Dr. Norman Lamm spoke about the people he saw behaving ethically when they were making $25 a week while squandering that same morality when they began making $250 a week, which I gather was worth more than it is today. This is a challenge each and every one of us must overcome in our personal life.

Yet there is also long-term amnesia–the forgetting of who we are. The forgetting of where we come from. Despite living in a generation with unprecedented amounts of information available at our fingertips, too many of us forget where we come from; too many of us forget the history of our people. From forgetting our ancestral homeland to forgetting the lessons of the Holocaust and the need to fight hate where it comes from, to forgetting the extraordinary sacrifices our forbearers made so that we can have the faith and identity of who we are today. And yes, many Jews forgot the fate of the Jewish people not only during the Holocaust but in the years that followed it. Forgetting the countless Jews who were locked out of every country in the world, forgetting the attempted repeated genocide against our people in 1948, and forgetting the price American Jews paid long before our generation for not putting enough of emphasis on Jewish day schools, Torah learning, proper access to Kosher food, and fostering a cohesive Jewish community.

The Midrash in the Yalkut Shimoni says here about the pasuk, “Hishamer Lecha pen tishkach–be careful lest you forget,” that there is an exchange program. God says you watch out to make sure not to forget me so that you do not come to “I’m Eshkachech Yerushalayim” if I forget thee oh Jerusalem.” This is not only homiletical. As the right of the Jewish people to a homeland is being challenged and undermined every single day on college campuses, the general media, and on social media, we must remember that as a people of history, if we forget our own history and fail to remind others, they, in turn, will forget who we are. If we forget who we are as a nation and what our unique mission is, losing our Jewish identity, we will also be challenged with the words I’m Eshkachech Yerushalayim.

Marching on 5th Ave. at the Israel Day Parade, one cannot ignore the fact that the vast majority of those marching are Day School students and Day School parents. It is no coincidence. A strong Jewish identity is grounded in the Torah, a knowledge of who we are as a people, and only then extends beyond that.

As a people grounded in memory and heritage, constantly combating a world that would love to forget, may we be blessed to live lives filled with joy, meaning, and prosperity. Lives that remain unchallenged by prosperity and success and continue to carry the proud banner of the generations before us with pride–and remembrance. Shabbat Shalom.