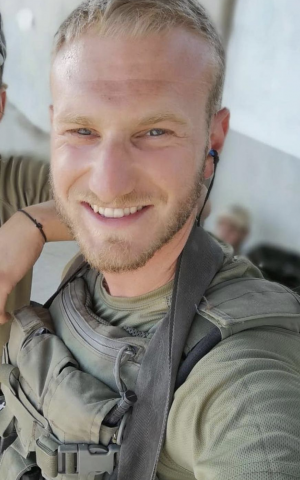 A few years ago I took my whole tour group to the Paratrooper beret ceremony of Eli Kay z”l who was a Lone Soldier from South Africa at Ammunition Hill. It was inspirational to meet these young Jewish adults who had put their lives on hold, made Aliya, and were serving our people to the upmost of their ability.

Eli was murdered this week at the age of 26 in the prime of life. He was doing what he wanted to do where he wanted to be.  In Judaism it is not important how long one lives but rather what one does with the life one lives.  Eli packed more meaning into his twenty-six years than most people manage in a lifetime.   As Billy Joel wrote, “only the good die young.”

Eli Kay was, until this week a name most of us were unfamiliar with.  He was one of the few thousand of Chayalim Bodedim (“lone soldiers”) in the IDF.  Those brave ideologically motivated and selfless individuals who leave the comforts of their homes and family in the western world and come to serve our Jewish homeland in the most meaningful way.  His fiancé, Jen Schiff eulogized Eli:

He was the strongest person I’ve ever known, emotionally and physically. And he was the smartest man I’ve ever met; caring and considerate and gentle and firm, and very loving and accepting, no matter what their background, no matter what they say or do. He always treated people with love and respect.  I know that when this happened, he didn’t feel alone,” Schiff continued, “and that he knew that being in this country, and doing what he did and who he was, it was giving what he had to the people around him and to the people of Israel.

Eli was laid to rest in the holy city of Jerusalem yesterday, where his family was joined by thousands of fellow Jews from across the political, religious, and ethnic spectrum from all over Israel and abroad who came to pay tribute to his memory and his heroism. They came to pay their last respects to someone who “walked the walk” of Zionism.  Eli’s name and deeds will live into eternity.

Hannah Szenesh, another youngster from the diaspora, also buried in Jerusalem, wrote a generation ago about striving to seek meaning in purpose in life.  At the age of seventeen on the eve of her Aliya to Israel just prior to the outbreak of WWII she wrote:

I don’t know whether I’ve mentioned that I’ve become a Zionist. This word stands for a tremendous number of things. To me it means, in short, that I now consciously and strongly feel a Jew, and am proud of it…One needs something to believe in, something for which one has a whole- hearted enthusiasm. One needs to feel that one’s life has meaning. That one is needed in this world. Zionism fulfills this for me.

Eli felt that Zionism gave his life meaning.  It was something for which he had a whole-hearted enthusiasm.  It made him proud to be a Jew and it makes us proud.  Eli died as he lived, leading by dugma ishit (“personal example”).  Zionism gave a meaning to his life, and he gave a meaning to Zionism by his life, and ultimately with his life.  Eli lived a full life with no regrets.  May his life and memory be for a blessing.  One of Eli’s brothers, Kasriel, who also served as a Lone Soldier in the IDF said,

Eli would have wanted every single person to give … to the best of their ability, in whatever way works for them, whatever they can for Israel.