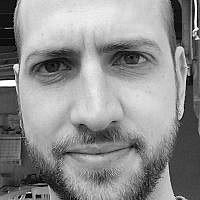 The Blogs
Robert Fuller
Apply for a Blog
Advertisement
Please note that the posts on The Blogs are contributed by third parties. The opinions, facts and any media content in them are presented solely by the authors, and neither The Times of Israel nor its partners assume any responsibility for them. Please contact us in case of abuse. In case of abuse,
Report this post.

Journalism has become one of the most controversial aspects of the Israel-Palestine conflict, essentially exploding into a second front of a war over cultural, ideological and political disputes. The media can be a useful weapon if one wields it correctly. The Palestinian media has both accused the foreign press of being voices of the Israeli government, while also advocating on behalf of the foreign press in what they view as the Israeli government’s “incitement” against the foreign media. It is hard to miss the the intentional use of the word “incitement” to criticize the Israeli government, since it is one of the most common accusations Israel wields against the Palestinian media.

Lest you think that media manipulation is only a Palestinian problem, elements of the Israeli media have also partaken in shady conduct of their own. An example are reporters who demand that the Government Press Office crack down on their fellow journalists in Israel. Journalists advocating that the government intervene in order to sway the reporting of other journalists seems antithetical to the profession.

The debate over impartiality and objectivity is quite a hot-button topic in the field of journalism, especially in regards to the Israeli-Palestinian conflict. Should journalists remain objective to every atrocity they witness or should they have the right to condemn horrifying acts as long as they do so objectively. In other words, should reporters maintain the right to condemn the carnage of the conflict, so long as they do so in equal measure, whether it be a Palestinian or Israeli civilian. Additionally, why has such journalistic nuance proven so difficult in this particular dispute?

It could be argued that the media in Israel and Palestine is embedded into their respected cultures. Much like an embedded journalist grows an affinity for the soldiers who protect him or her in a war zone, the national identities of the actors and societies involved in this war impact the media’s treatment of the conflict. Hence why there may be more nuance in reporting when Western allies attack a country on the other side of the planet;  the stakes just aren’t as high for the average American or Briton. It’s much harder when media actors and the viewership see the outcome of the conflict as the survival of their respective culture. This is why it can be so easy to fall back on typical government and cultural narratives. It also explains why elements of cultural collectivization impact reporting, since it appeals to the traditional narratives, to which the audiences are familiar. For example, Palestinian reporting on the bombing of the UNRWA school during the 2014 Gaza conflict makes frequent mention of the fact that many of the the victims had recently celebrated Eid, a a collectivist cultural element, linking the Palestinians to the broader Islamic community. In comparison, media reports on a March 8, 2016 stabbing on a Tel Aviv boardwalk that killed an American citizen, repeatedly stated that then Vice President Joe Biden was dining nearby. Once again creating a collectivist argument for the cultural ties between Israel and the United States, and seemingly insinuating that a threat to one is a threat to the other.

Whilst preparing for this article, I reread a paper about the coverage of the Second intifada, but whose findings were very prescient for the conflict today. Titled, “Covering Death in Conflicts: Coverage of the Second Intifada on Israeli and Palestinian Television,” Gadi Wolfsfeld, Paul Frosh and Maurice Awabdy discuss how reporting often takes on the “victimization” mode or the “defensive” mode of journalism in the Israeli and Palestinian media. Both sides engage in what could be considered victimization, but both also diminish the suffering of the other, while articulating justifications for their actions.

There are countless examples from the media of both actors, but I will try to keep this succinct. It would appear that Israel attempts to downplay the realities of its actions by relying on mere casualty statistics or by utilizing justifications, rightly or wrongly, for why said action took place. For example, Israel blamed Hamas’ proximity to the UNRWA school as justification for the strike, and some in the Israeli media accused the UNRWA of complicity with Hamas’ war machine. The Palestinian media, on the other hand, have a much greater flair for the dramatic. Grisly reports of boy scouts picking up body parts with bloodstained hands are an example from the Palestinian Ma’an News Agency. Once again, the modus operandi seems to be that the media should heighten the suffering of its respective side and downplay the suffering of the other. In the aftermath of the stabbing attack on the Tel Aviv boardwalk, the Palestine News Network described how the Israelis beat and “tortured” the attacker, shouting “he’s an Arab” (again cultural collectivism). The news sources barely made mention of the fact that he had just killed a man, and stabbed eleven others, including a pregnant woman. The Palestinian media, therefore, made great efforts to humanize the attacker while negating the suffering of the the twelve victims of his attack. Once again, there are countless more examples of such tactics on both sides if one does even a cursory examination of Israeli and Palestinian media sources.

This article is not intended as a condemnation of the media as a whole or to insinuate that journalists have an inherent agenda. Its goal is to merely examine whether the media in both sides of the Israel-Palestine conflict have so much stake in the outcome of the conflict that it hinders impartiality. Is it possible that this cultural “embeddedness” is the reason why impartiality in reporting on the Israel-Palestine conflict has proven so difficult for their respective media? Does this also help explain why traditional narratives seems to dominate the discussion? This would seem to be a difficult hypothesis to prove in a conflict where both sides believe that the survival of their culture hinges on outcome of the struggle.