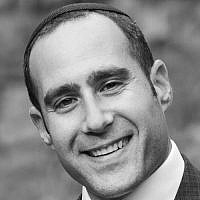 The Blogs
Tzachi Rosman
Apply for a Blog
Please note that the posts on The Blogs are contributed by third parties. The opinions, facts and any media content in them are presented solely by the authors, and neither The Times of Israel nor its partners assume any responsibility for them. Please contact us in case of abuse. In case of abuse,
Report this post.

Acquaintance: How are you?

While the above dialogue was only seconds long, I’ve thought about the exchange numerous times since. My reflections have centered around two elements. The first is how his comment impacted me. While my initial response was genuine, his questioning the legitimacy of this emotional state had me question myself. Is it possible with so many people suffering that I could be “doing great.” Maybe my response was instinctive and not an accurate representation of my emotional state.  In psychological terms, maybe my sense of “doing great” was simply my denial of an uncomfortable reality in which I really wasn’t so great. Maybe I was actually feeling awful or just not so good?

The second pertains to my acquaintance’s comment which purports that given the current Pandemic my “doing great” is either an impossibility or completely invalid. His assumption is that there is no room for an individual to feel “great” when there is so much sadness, pain, and heartache in the world.

These two elements combined to produce another, more complicated question: If I was, in fact, truly “doing great,” is there something wrong with me for feeling good when so many others are feeling so bad?

Thank you psychology training for turning a simple 2-second interaction into a philosophical conundrum.

Upon analysis, I established the following: At the time, I genuinely felt like I was “doing great.” Also, my feelings were valid despite the presence of a Pandemic. What about all the nuanced inquiries referenced above? I believe they self-resolve once one gains a more nuanced understanding of human emotion.

People often think of emotions similar to paint on a pallet. Colors laid out separately on the pallet which are easily recognizable and available for the artist to choose at will. For amateur artists, this layout allows them to choose the specific color they wish to use while painting their picture. Before starting the project, they think about how they would like it to look, choose the colors necessary to achieve their goal, and neatly squeeze them onto the pallet for future use. Other than technique, it is similar to drawing with crayons, markers or colored-pencils.

The pallet of seasoned artists, however, looks quite different. While they, too, begin with separate paint colors at the outer rim of their pallet, they also make use of the rest of the pallet for color mixing.  These mixing areas allow for the creation of new colors that are unique to the artist and the project. There is no recipe to follow for these new colors, but rather the eye of the painter serves as the guide.  The color can be fine-tuned based on the artist’s desires and provides the artwork with a specialness of hue in addition to image. Describing a mixed paint color as blue, for example, while not technically incorrect, is certainly imprecise. This, no doubt, is why Crayola has built their crayon empire on the creation of nuanced (and creative) names for their different shades of crayons.

Emotions color a person’s world. When an individual is in “a good mood” they often perceive the world in vibrant colors that elicit positivity and joy. This is the “rose-colored glasses” phenomenon. In contrast, those in a morose state tend to experience the world through darkly tinted glasses that dull the natural colors and generate an overall sense of gloom and listlessness.

When describing one’s mood, we often relate to emotions in a similar manner to the novice’s paint pallet. Descriptions such as “I’m happy or sad or anxious or mad” are all pure unadulterated emotions that, while accurate, inevitably do not capture the entirety of our emotional experience. Terms such as “I’m good or fine” fit the same bill. A colleague of mine, whenever she would hear someone say that they were fine, would always retort:  “Fine is a description of hair, it is not an emotion.”

Describing our feelings in this manner is not simply inaccurate, but also restricts our emotional experiences. Just as a novice would not be painting with red and blue at the same time on the same brush (hence the ever important cup of water), having limited emotion options during a given experience detracts from one’s ability to feel the often multitude of feelings that might arise simultaneously. For example, a CEO father passing on his position to his son upon retirement. There is likely a plethora of emotions including: a feeling of joy for the ability to pass along his legacy, sadness about leaving his company, pride in his son’s ability to fill the role, and fear about what life in retirement may look like, just to name a few. Describing the ceremony as “joyous,” while accurate, does not adequately paint the picture of the event. Of significance, is typical human behavior. For the father in the above story to describe his sentiments as “a mix of joy, sadness, pride and fear” would be more precise, but somewhat unusual during a casual, impersonal, conversation

When my acquaintance inquired as to my well-being, I responded in a simplistic manner. This was not meant to simply dismiss his inquiry without inviting further discussion (as such responses are often meant to do). Rather, for me, “Great,” served as a header under which my more nuanced feelings lay. It was my way of calling the color yellow, when it was truly a bluish, yellowish, greenish mix that had streaks of each color within it.

Was I blue (sad) about the pandemic? Sure. Was I joyous (yellow) about a recent success I had?  Definitely. Was I, also, envious (green) about a comment I heard at work? Absolutely. (The final scene of Pixar’s 2015 film, Inside Out, provides an excellent depiction of how the mixture of emotions result in optimal life experiences).

While I could have labeled my mood any of these options, I chose to characterize my state of being as “great.” The beauty of painting your life using a uniquely mixed color pallet is that you also have the ability to name the color based upon the state of being that you wish to share with others.

That title, representative of your overall attitude, is uniquely yours to describe. My colleague chose to use “under the circumstances” as a way of highlighting the blue in my mixture. Me, being the artist, had the right to highlight the yellow, instead. Neither of us were right or wrong, it was simply a matter of perspective. After all, there are no right or wrong emotions. If you feel it, then it is valid.

Every experience we have in life is “under the circumstances,” in that it never happens in a vacuum. Painting with care, precision, and nuance goes a long way at enhancing the final product which we display to the world.

The attitude we choose when interpreting and representing these experiences serves as the identifier of the masterpiece. This work, painted on the canvas that is our lives, is our magnum opus. It behooves us to choose the title wisely.

About the Author
Tzachi Rosman, Psy.D. is a licensed clinical psychologist who specializes in the treatment of issues related to addiction, trauma, and self-esteem. Since 2008, Tzachi has worked at VA Hudson Valley HCS in Montrose, NY serving as Staff Psychologist on the hospital’s residential Substance Abuse and PTSD units. Tzachi has a private practice in Teaneck, NJ, enjoys writing articles about Mental Health, and free-building Lego sculptures. He can be reached at yrosmanpsyd@gmail.com.
Related Topics
Related Posts
Comments