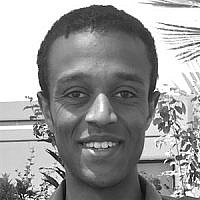 The Blogs
Hanoch Arega
Apply for a Blog
Please note that the posts on The Blogs are contributed by third parties. The opinions, facts and any media content in them are presented solely by the authors, and neither The Times of Israel nor its partners assume any responsibility for them. Please contact us in case of abuse. In case of abuse,
Report this post.

From an early age, I was curious by nature. Today I believe that a simple question changed my life. One day I asked myself, “how do computers work?”

When I arrived to the holy land, at the end of 2009 as a tourist, I knew nothing about computers. Back then, I was passionate about physics, and I was specifically interested in studying theoretical physics.

Thanks to the power of the internet, I gradually learned about computers and about the mechanisms that allow them to function. YouTube served as a golden ticket. I spent most of my time watching tutorials, and fell in love with the world of programming. It was simple — I just had to watch some tutorials, download some software, and start studying!

Around 2012, I began writing simple code using visual C# and began experimenting with web technologies. I also set up a website to upload my own video tutorials in Amharic. Most of the Ethiopians I spoke with, mentioned an interest in learning about technology, but also noted that this was impossible due to the language barrier. When I learned this, I got right to work. I immediately began participating in different open source projects like writing articles in Amharic on Wikipedia, contributing to Google translations for Ahmaric text, and more. I also created my own YouTube channel, and Facebook page with tutorials and information about computers in Amharic.

Today, I have reached 15,600 followers. I have found myself speaking to people from all over the world. I receive questions every day, and to respond to each one, I do a lot of research.

As a result of my amazing journey and learning experience, I have discovered new hope within me. My dream is to become a programmer, and I believe that I can make a difference through technology.

Around 2013, I received Israeli citizenship. Since then, the first thing I did was to enroll in college. I studied software engineering at the SCE College of Engineering in Beersheba. Studying in Hebrew proved to be very difficult for me, so I changed my path.

I decided that it was my duty to serve my country. While serving, I was also able to learn Hebrew. I drafted to the IDF in April, 2015. I began a three month army Hebrew course. Not only did I improve my Hebrew, but I also finished my time there as the company’s outstanding soldier. I was accepted to serve in the IDF’s central computing system unit, the Center of Computing and Information Systems. I wrote code and practiced what I had taught myself several years ago, in a variety of interesting projects. Every day I learned, and met friends for life.

To my great surprise, I was selected to receive the President’s Award of Excellence for my service. That was one thing I never expected. It is an honor for me, my family,  my unit, and hopefully for all Ethiopians and Israel.

An additional honor is that I will be attending the army’s prestigious computer programming course, and will be remaining in the army beyond my mandatory service. I hope that I will finish my course successfully and serve my country in the best way possible by using technology.

I am grateful to all the people who stood and continue to stand by me through both my difficult and happy moments, motivating me and helping me achieve that which seems impossible. Thank you.

About the Author
Hanoch Arega serves in the IDF and also helps his community by creating programming tutorials in Amharic. He is receiving the Independence Day President Award of Excellence for his service.
Related Topics
Related Posts
Comments