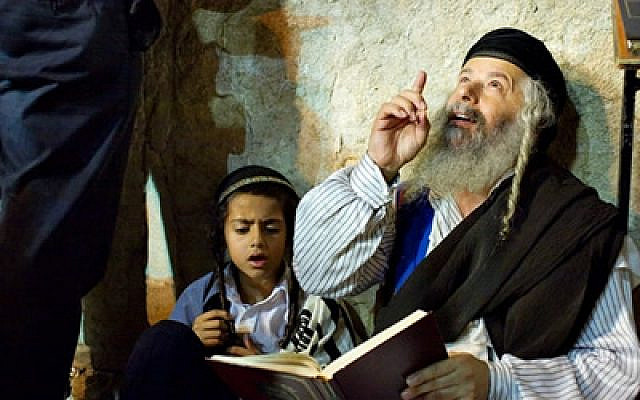 A Jewish child and adult prayer, via Creative Commons

There is an Italian adage, “traduttore, traditore,” which translates to “the translator is a traitor.” The maxim works as its own proof, not only does it sound better and more concise in the original Italian, but it undoubtedly loses its unique meaning and punch when deconstructed and reconstructed in a foreign tongue.

The same applies to the Hebrew word “emunah.” In English translations, the word often switched for “faith” or “belief,” but emunah is so much more than that. Emunah is innate, it is beyond the logical analysis of rationality and beyond the simple confessional nature of faith or belief alone. Emunah is what has driven the People of Israel for over 3,500 years, it has driven Jews to be slain in martyrdom rather than deny the Truth of Hashem and their Jewishness and it has driven Jews to build the greatest civilization in the history of our world. To believe is to take someone’s words as true, to reason is to take your own words as true, to have emunah, however, is to know something as true and act upon it with conviction.

This idea of words, adages, and concepts getting lost in translation was a central theme in the 10 Tevet fast earlier this month. Along with the death of the prophet Ezra and the beginning of Nebuchadnezzar’s siege of Jerusalem, the writing of the Septuagint, the first translation of the Torah into a foreign language, is cited as the reason for the fast. Completed on the orders of Emperor Ptolemy II, “the day when the Torah was translated into Greek [the language of the Septuagint] was as unfortunate for Israel as the day of the Golden Calf” (Soferim 1:7).

While the Torah was opened for a wider audience to learn from it, much of its depth was lost in translation and much more foreign material imported in replacement. Most infamously, Moshe’s “karen or” in Shemot 34, authentically believed to be radiances of light, were more simply translated to “horns,” beginning the millennia-long belief that Jews have horns and Isiah’s prophesied “almah” in Isaiah 7, understood to mean “maiden” or “young woman,” was translated to a similar and more specific “virgin woman,” which was later taken by Christians as an evidence for their religion. Worst of all, the Septuagint greatly strengthened the numbers and power of Hellenistic Jews, Jews who identified more with Greek thought and culture rather than that of his Jewish brothers and sisters, using the translation to justify their libertine disloyalty.

In the modern day, the conflicts present in the writing of the Septuagint remain. Foreign powers who seek to exert their power unto Israel persist. Jews who have been left to identify more with such foreign powers than their own people and actively seek to aid the former in their subjugation of the latter, unfortunately, persist.

The Israel of emunah, however, remains stronger and greater than ever, more so than their foreign enemies or their few internal saboteurs. Every day, more Jews are returning to authentic Jewish culture, practice, and thought, studying our art and literature, celebrating our holidays, protecting our customs, and observing our laws with greater passion than ever before. Specifically in Israel, there is a reinvigoration of Judaism with an old-new spirit, the spirit of a great reuniting of our people in our land with our Torah.

When Religious Zionist chairman Bezalel Smotrich announced primaries, it was made clear that this group, the Israel of emunah, was the base around which the party would be built. Regardless if they are Ashkenazi or Sephardi, whether their kippah is knitted or black velvet, or even if their Jewish engagement is not currently at the level they want it to be yet, the passionate majority of Jews who feel the inherent conviction of their people and their mission are the backbone of Israel. For these Jews who feel this passionate conviction for their people, their state, and their way of life, the Religious Zionist Party is their home.

The Israel of emunah cannot stand by and watch the current government’s failure to protect Israel. From meeting nearly daily Arab attacks against Jews with excuses and apathy, caving to American orders on multiple issues of national security and integrity, joining with radical leftists and Islamists to undermine and undo Israel’s national and religious character, this government has opened up Israel for attack on every front. It is the duty of those with emunah to declare enough is enough, to stand up and demand the dissolution of this government and its replacement with a coalition based on the national and religious values that are central to our existence as a people.

To sign up for the Religious Zionist Party and to determine the list for the next election, click here. Membership forms are available in Hebrew, English, Russian, French, and Amharic.