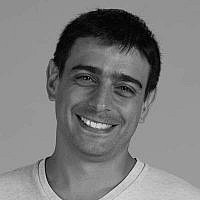 The Blogs
Yoav Cohen
Apply for a Blog
Advertisement
Please note that the posts on The Blogs are contributed by third parties. The opinions, facts and any media content in them are presented solely by the authors, and neither The Times of Israel nor its partners assume any responsibility for them. Please contact us in case of abuse. In case of abuse,
Report this post.

At some point, you just needed to get away from it all. So I did.

I spent a good amount of time this year traveling through Israel’s backyard as a photojournalistic tourist, rediscovering my own home from a whole new angle.

From a little-known shipwreck fifteen minutes from Tel Aviv, to coffee with strangers in the middle of the desert under the Milky Way – this is an Israel that you have never seen before.

This abandoned military outpost lies just outside of Keshet, a settlement founded during the Yom Kippur War. Pristine, intact, and still surrounded by minefields, Tel HaElla offers a serene, 360-degree view of the once war-torn area no matter when you visit. 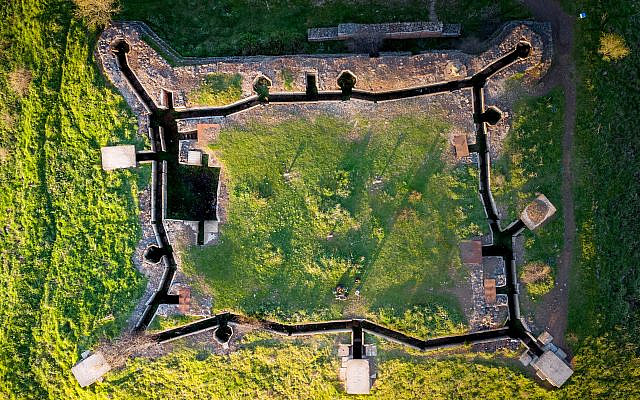 North of Herzliya lie the remains of a boat which was once the pride of the Israel’s pioneering fishing community. The Sa’ar mysteriously ran aground on its way back from a routine trawling trip. Despite multiple efforts to get it back to seaworthy shape, the ocean had other ideas, drawing the ship twice into the surf during salvage efforts before it found its final resting place, just off the coast. 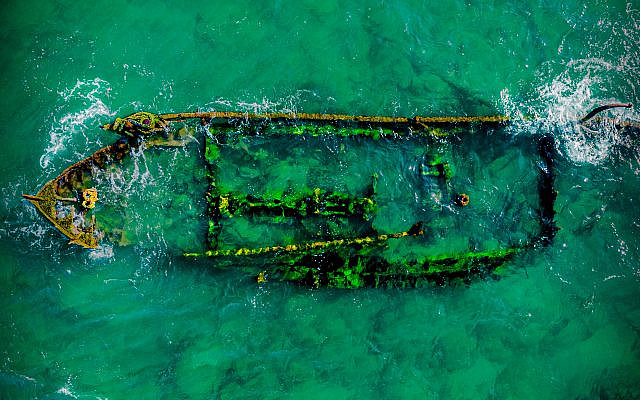 Two million years ago waters from the Mediterranean flowed through The Jezreel Valley to the Sea of Galilee, the Jordan, and finally the Dead Sea. When the earth rose and disconnected the channel from the ocean, humans began to shape its landscape, history and politics – from the bloodshed of famous battles in the Bible to today’s fields of wheat and melons. 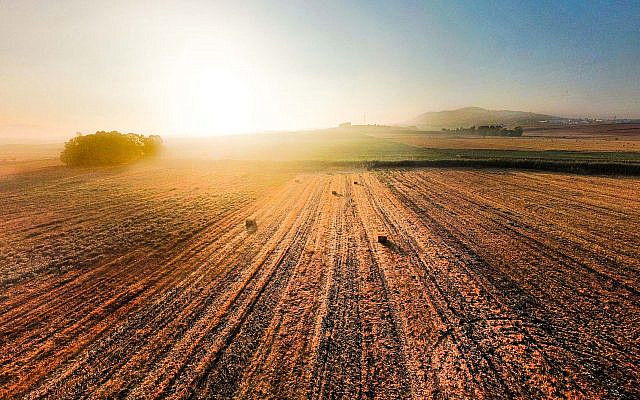 Sunrise over the fields of the Jezreel Valley (photo: Yoav Cohen)

Once a military landing strip, then a commercial airport, today Sde Dov Airport is a massive open field, awaiting residential and commercial development. The only remaining structure is its control tower, destined for preservation. In the meantime, its graffitied facade, along with the entrance to the airport, are the sole, silent reminders of SDV in the heart of one of Israel’s most densely populated areas. 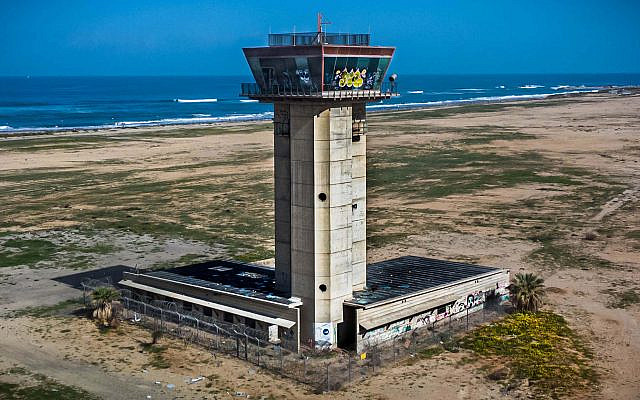 Originally named “Shaar Zion” (the gate of Zion) – the Tel Aviv Port was the landing ground for immigrants arriving in British Mandate Palestine after the 1936 Arab boycott blocked the Jaffa port from Jewish activity. The new port, and specifically its crane, played roles as a British naval base in World War II, and as the main supply port during the War of Independence in 1948. Today, it is arguably Israel’s second most touristed site, after the Kotel. 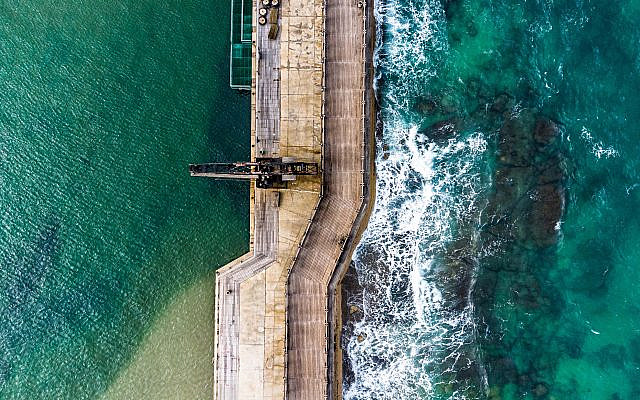 6. The Sea of Galilee – Spring Rainbow

After a number of years of its shoreline hovering just above the Black Line (-215.5 m), the Kinneret has made an impressive comeback, its waters rising within reach of the Top Red Line (-208.8 m). This spring storm rainbow was captured during Pesach this last year, when hotels were finally opened for high season travel after being shut in 2020. Still, the boats that take Christian pilgrims across the Sea where Jesus walked on water lie in dry docks, waiting for the return of their international patrons. 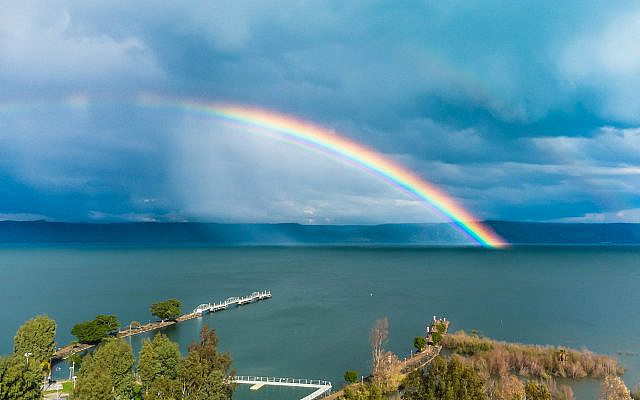 Rainbow over the Sea of Galilee

7. Hadera – Sharks in the Shallows

Drawn to the warm temperatures of the Orot Rabin Power Plant’s water discharge channel, tens of Dusky and Sandbar Sharks return every year to enjoy this spot on Israel’s shore. As the sharks discovered the waters, people have discovered the sharks, and come to swim or row alongside them. While this seems like a crazy idea, these endangered predators seem not to be bothered much by the humans surrounding them. 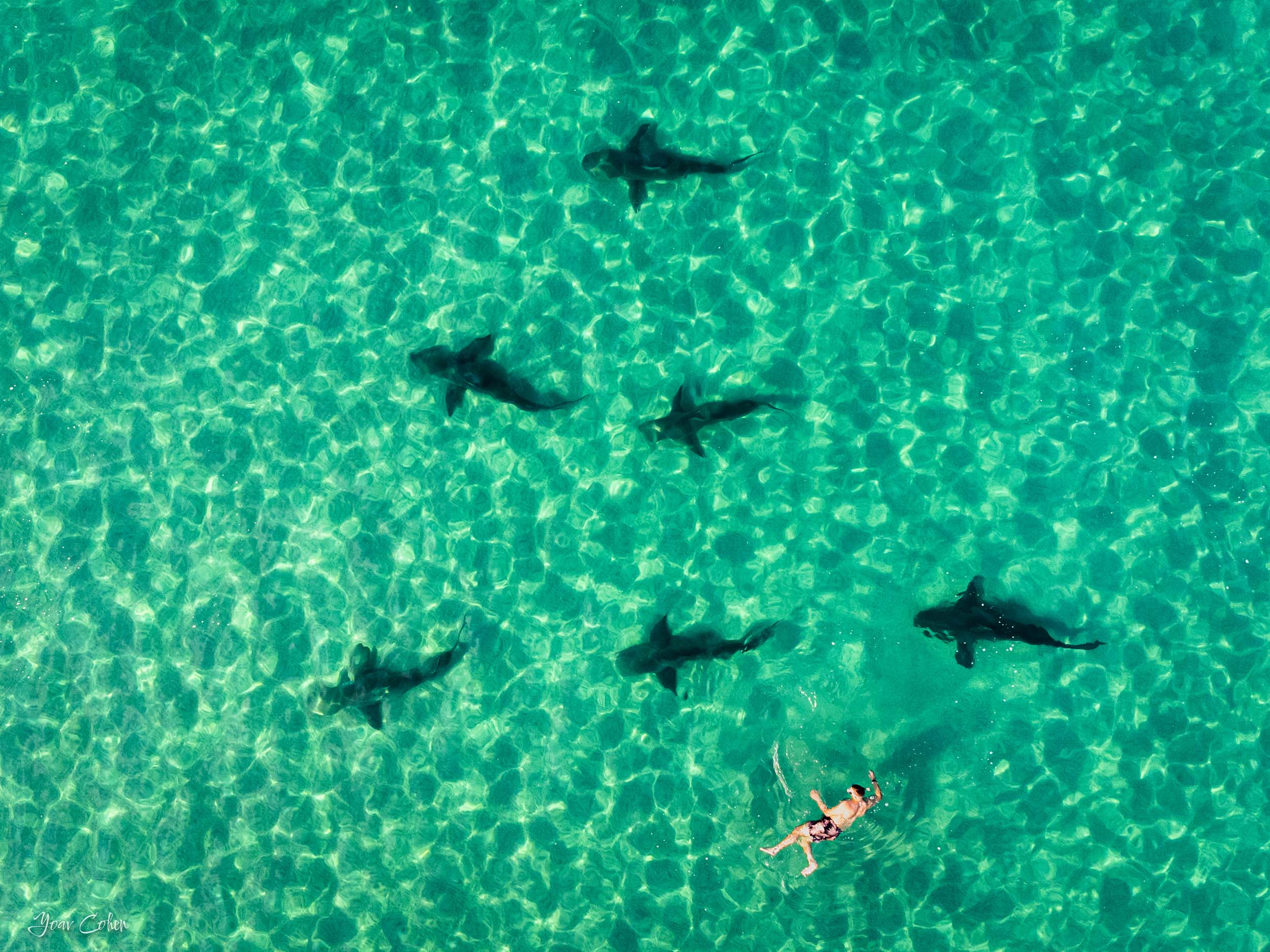 Harvesting crops in the fields outside of Ofakim in the Western Negev was the backbone of Israel’s periphery for decades, and still remains a major part of people’s livelihood alongside other, developing industries. From above, the back breaking work of a cabbage harvest creates amazing compositions – with textures, colors, lines and shapes that can only be appreciated from a bird’s eye view. 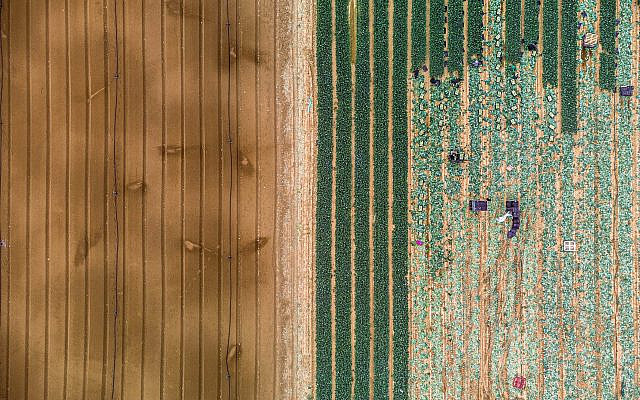 This photo of an Israeli flag at Jaffa Port was taken on May 7th, days before the eruption of violence between Israel and Hamas, which in turn created turmoil between Jews and Arabs the likes of which had not been since 1929. Jaffa was no exception to Acre, Lod, and many other mixed cities. The threat of lynching, gunfire, rioting and looting shook Israeli society to its core, before calm returned to its streets, and the port, a few weeks later. 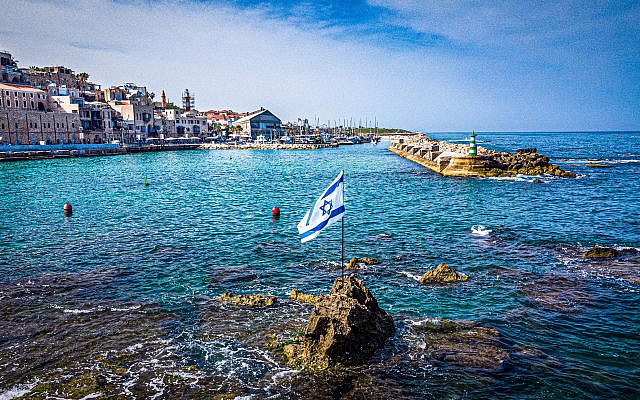 While this is not a drone photograph (drones are banned for use here), a night in the Ramon Crater is an epic experience from any angle. The heart of the Negev remains among the only places in Israel where light pollution is low enough to allow the sky to be experienced in all its glory. The Crater remains off limits for human settlement to protect this natural wonder. This is also what allows us a glimpse into the natural magic show that occurs every night, right above our heads. 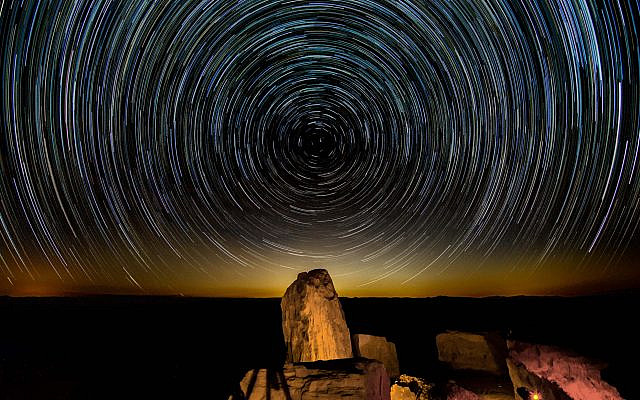 Movement of the earth around the North Star, Ramon Crater (photo: Yoav Cohen)

This man-made dam built on the Revivim River in the 1950s collects rain that is channeled to the surrounding agriculture in the heart of the desert. Summer turns the landscape into a mix of brown cracked shores with dry tree stumps, contrasted by deep blues and vibrant greens of the water that remains. Being an oasis in the middle of the Negev, it’s a resting spot year round for an abundance of birds and land animals who frequent the lake. 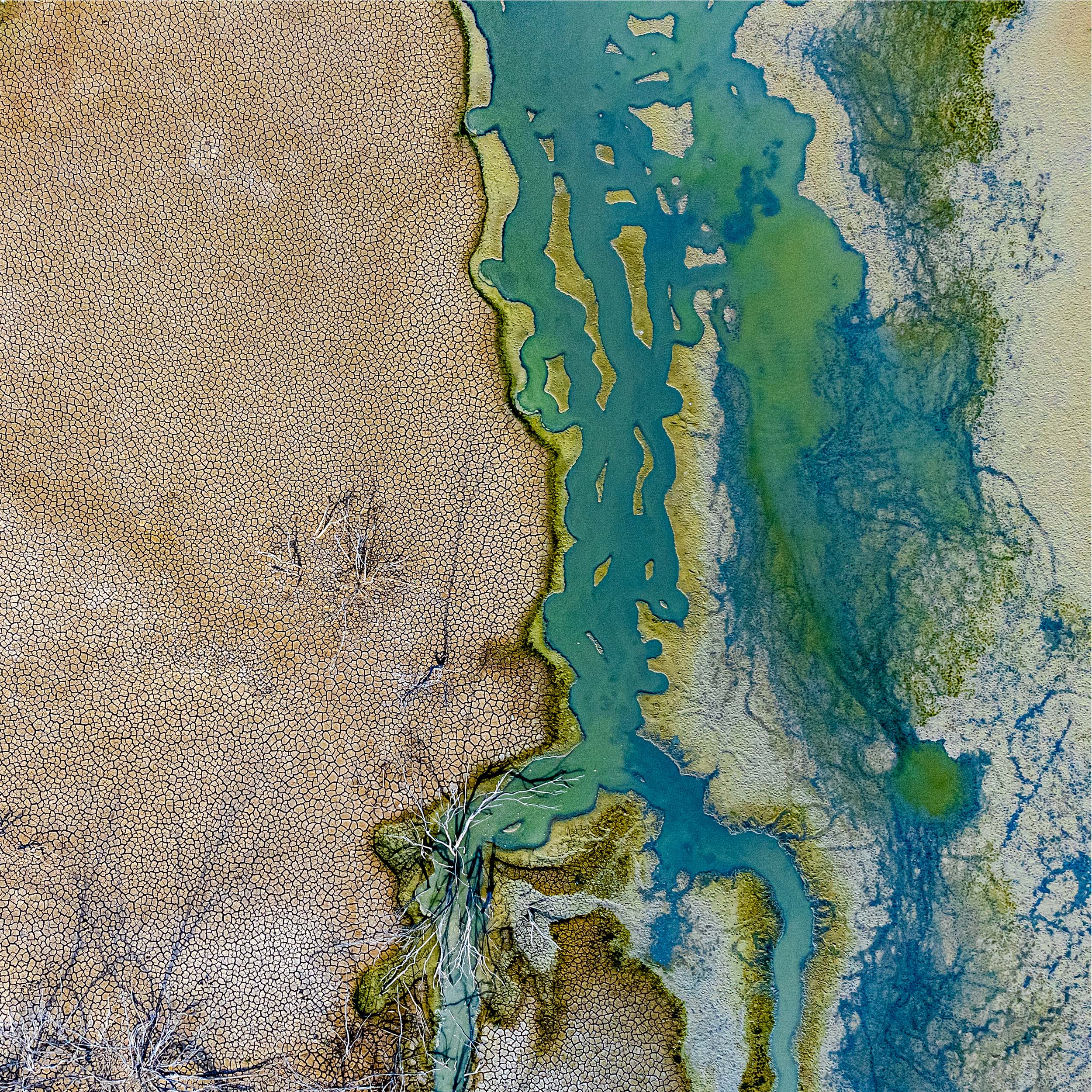 A desert oasis in the middle of summer – Yeruham Reservoir (photo: Yoav Cohen)

A drive down road 90 transports you to another planet. Vast, seemingly desolate plains lie under towering mountains on one side, and on the other – the shore of the lowest place on earth. The Dead Sea is a dying wonder, its natural imbalance evident in a multitude of sinkholes that dot the landscape, especially in the northern areas of the Sea. Other spots, like this pool near the hotel district, blend the browns, blues and golds of human intervention into an otherworldly creation – equally beautiful and sad in the same frame. 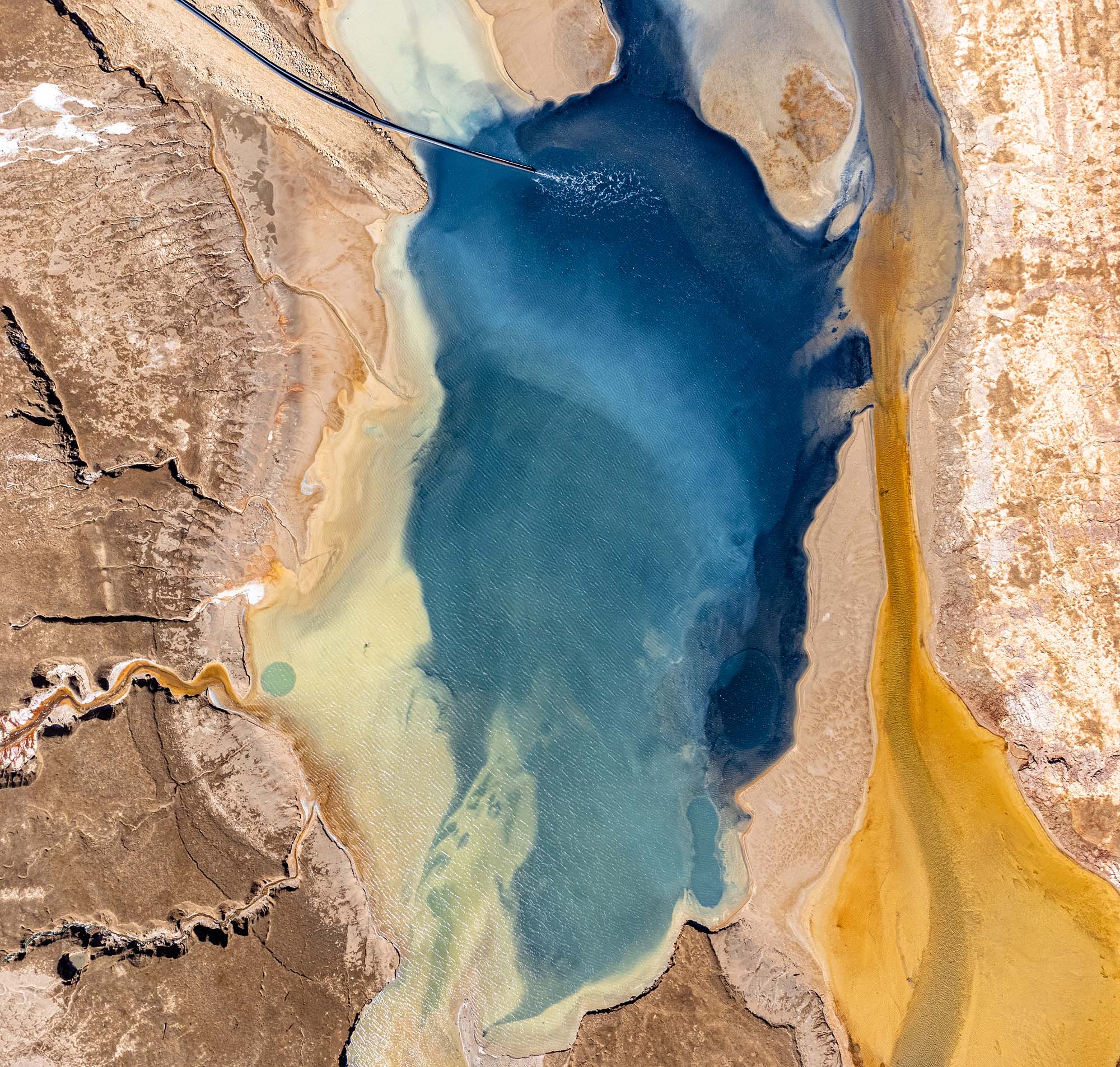 What awaits us in 2022? Ironically the only thing we can count on is that our reality will be full of uncertainty.

We all need a place to escape to once in a while. While most won’t be getting on a plane soon and heading off overseas just yet, it’s a good thing that within Israel we have an almost infinite trove of treasures to discover and explore.

I’ll be out there.

About the Author
Yoav Cohen is a career high tech junkie, and former senior emissary of the Jewish Agency to Westchester, NY. He is the photographer and author behind the lens and journal of "Point of View" - a new travel & photography blog on Israel.
Related Topics
Related Posts
Comments