On last Friday July 17th  a demonstration against Erdogan ‘s policy in Libya was organized in front of the European Commission in Brussels. That same day  a meeting of the 27 European heads of state took place in Brussels too.

President Erdogan has been pursuing a policy of interference in Libya for a long time now, and Europe has a duty to react very quickly.

Not only Erdogan  keeps sending soldiers to Libya but it is no secret that pro Muslim Brotherhood militias are taking advantage of that , with the blessing of the Turkish President, to invade Libya.

That movement of troops and militias is a danger for Europe because we know how easy it is to move from Libya to Tunisia (which is governed by a party pro Muslim Brotherhood) or to another country of Maghreb.

Passing from Maghreb to Europe is not a problem for the Islamist radicals and Authorities know this perfectly. The Turkish people is not Erdogan and the latter is not the Turkish people. So we must help the Turkish people to return to a democracy. By helping the Turks, we will protect ourselves against attacks which may be deadly. 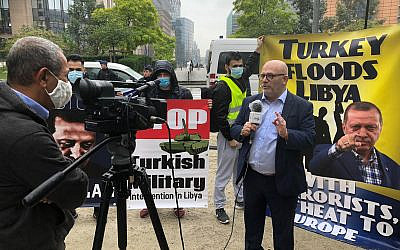 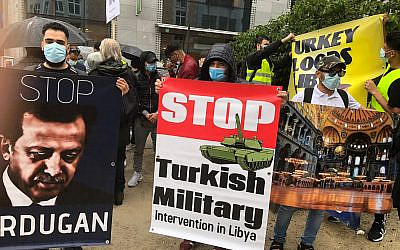 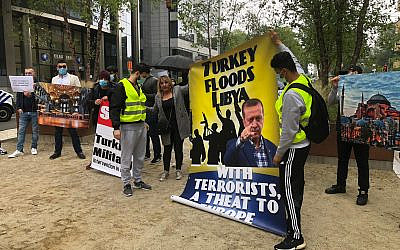 Demonstration against Erdogan
personal collection
About the Author
Eric Gozlan is Government Counselor and co-director of the international Council for diplomacy and dialogue. He works in civic diplomacy in the Middle East and in Africa. He has received numerous awards for peace and gives numerous lectures. He served in the IDF for several years.
Related Topics
Related Posts
Comments