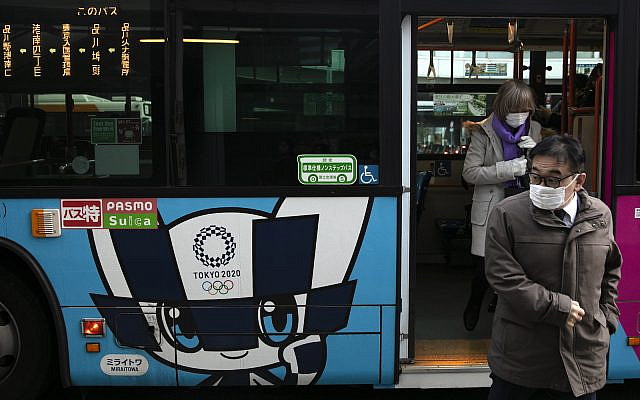 Passengers wearing masks get off a bus with the livery of Miraitowa, the official mascot of the Tokyo 2020 Olympics, in Tokyo, Thursday, March 5, 2020. (AP Photo/Jae C. Hong)

There is something of a surreal empty feeling around Tokyo these days, like an old-time horror movie, perhaps one of the zombie flicks. Train lines where one usually feels like a sardine are nearly empty (standing is now a choice not a necessity), no lines are found at trendy restaurants, and it is even easy to find a seat at our local Starbucks. Ideally, this would be the time to visit all the tourist sites, which are normally crowded with both foreign and Japanese tourists. But many are closed, and uncertainty about contagion, especially on public transportation, renders the rest unreachable.

So much is canceled or discouraged from schools to large and small events or meetings. Even the Hanami, the annual weeklong celebration of the sakura, the cherry blossoms, has been canceled, and the traditional picnicking discouraged. The cherry blossoms, of course, will be there, but “no stopping, please, just take a glance as you walk by.” Hanami is the most fun as a group activity; I am unsure how it will be in isolation. While I have no worry about zombie hordes attacking from around the corner, Tokyo is no longer its normal vibrant array of colors and sounds, but instead feels more like the matte grey of black and white.

Avoiding public transportation, for the most part, has had the positive effect of encouraging lots and lots of walking. Still, it again is isolating and somewhat lonely. Even the streets around our home seem far emptier than usual. Ours is a neighbourhood with lots of Gaijin (non-Japanese) amidst a sea of Japanese people, yet now few are seen. We have, however, seen several families packing into taxis, as they prepare to fly to some contagion free destination. Yet, where will they go? COVID-19, the coronavirus, is nearly everywhere. Our Japanese neighbors seem likewise absent. Each day it seems we see fewer and fewer people out and about. There are, however, areas that are still crowded. School is off, and teens fill parks and youth-centered areas like Harajuku. They are, as one would expect, among the few who feel immortal and are blithely unphased by the virus. These scenes remind me of Lord of the Flies or other books or films where adults are suddenly out of the picture. Despite these isolated crowds, when we walk, though others are also walking, I bet they as we feel alone.

As the weeks pass by, we have been reminded of the difficulty of living Jewishly in a vacuum. Though we never realized it, here in Japan, ours is a tourist-driven industry. Along with our members, we depend on the flow of foreign visitors for the maintenance of regular, well attended, religious services. Now there are nearly none. Minyanim are now a distant memory, and big celebrations like public Purim and communal Pesach Sedarim put off to a future year. Like our daily walks, Shabbat davening with two or three has become a very lonely time, shared with very few.

Now computers are coming into their own in the sphere of Jewish life. I have long been suspicious of virtual communities, believing that they are effectively more isolating than welcoming. Yet, now our community is primarily brought together by virtual divrei Torah, a virtual Hebrew school, and upcoming virtual megillah reading and Havdalah. We are even considering having a virtual 2nd-night family-centred Seder.

These are solutions unimaginable in the past and only made possible by the technological advances of modernity. They may not be traditional, yet they may help to alleviate the feeling of isolation. I believe, indeed I sincerely hope, they will not replace the physicality of terrestrial communities, built on the hug and kiss matched with a sincere Shabbat Shalom. Yet in a time of crisis, they create welcome connectivity.