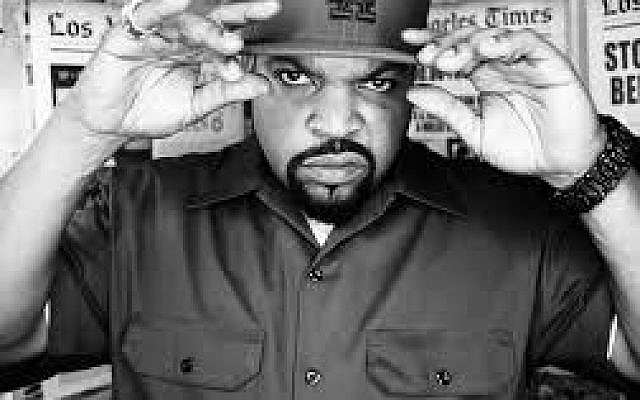 Last week, famous rapper, actor and producer Ice Cube made a conscious decision to start a targeted campaign attacking the Jewish community on his social media account. He tweeted out images that perpetuate decades old stereotypes insinuating that Jews run the world and that Jews have made our money on the backs of African-American slaves.

FUCK THE NEW NORMAL UNTIL THEY FIX THE OLD NORMAL! pic.twitter.com/wNN3uwOb4K

After he was done with his direct shots at the Jewish community, he tweeted out his support for America’s most hated Anti-Semite, Louis Farrakhan. He tweeted out about the “Honorable Louis Farrakhan”. Listen up Ice Cube, there is nothing honorable about a man who preaches about “Separating the Good Jews from the Satanic Jews” or about how “The Satanic Jews control everything and mostly everybody.”

I’m not surprised that Ice Cube is taking to social media to attack the Jews. He has a consistent track record of Anti-Semtisim throughout his career. In the 1990’s, Ice Cube released a studio track with phrases such as “With a white Jew tellin’ you what to do” and “Get rid of that Devil real simple, put a bullet in his temple.” This lyric is insinuating that Jews tell African-Americans what to do and the only way to fix that is to put a bullet in their heads (i.e., murder the jews).

I’ve been extremely vocal on my Twitter account in condemning Ice Cube and in calling on senior leaders of the Jewish community to issue full-throated condemnations. Only a few have spoken up, and I must say that I’m very disappointed in the ADL, more specifically in their CEO Jonathan Greenblatt.

I was waiting for Greenblatt to issue a strong response to Ice Cube because I thought: how could he bury his head in the sand on this?

How could he possibly ignore such a blatant attack on the Jewish community? But he did what he’s done time and time again – he remains silent or he has the ADL issue a blanket statement. It took a couple of days, but eventually the ADL issued a two sentence tweet that stated:

We need to be united in the fight for justice. That's why it is so disheartening that Ice Cube is using his platform to elevate #antisemites like Louis Farrakhan & cryptic posts that seem to touch upon #antisemitic conspiracies.

Even Marc Lamont Hill, a known BDS supporter, tweeted to Ice Cube asking him to stop spreading this antisemitism. Yet the ADL could only muster up the words: “Seem to”.  You’ve got to be kidding me.

Sadly, no. This is his second antisemitic post in a week. Conspiracy theories of Jewish global domination are textbook antisemitism. https://t.co/2EACMnehVK

So while Hill condemned Ice Cube, Greenblatt himself was silent. Greenblatt is supposed to be one of the leaders of the Jewish community. He usually issues statements himself, yet this time, he hid behind a two-sentence statement issued by the ADL Why does he use his voice when hatred is coming from the far right and white supremacists, but when it comes from Hollywood elites like Ice Cube or Members of Congress like Rep. Rashida Tlaib, he’s radio silent?

What courage does it take to condemn a Neo-Nazi? Not much. But condemning a Hollywood elite like Ice Cube, while it may take courage, is arguably more critical, as he has abused his privilege as a public figure and used his platform to spread hateful lies and rhetoric to his many unknowing followers.

There is a new crop of young Jewish leaders rising to power in the United States that is sick and tired of the complacency from “leaders” like Greenblatt. We don’t just send out a tweet and move on. We create campaigns, we turn our words into action and then we use social media to spread our message to the masses.

I took a much different approach, I tweeted out a video specifically condemning Ice Cube and calling him a Jew hater. That’s what he is. My message was then used in a Israel Advocacy Movement  movement that very clearly connects all of the dots regarding Ice Cube and his history of Jew hatred.

???? WATCH: @IceCube double down on his antisemitism pic.twitter.com/NNdEIAmNSh

Here is my message…

I’m calling on the “Woke” Cancel Culture to wake up and cancel Ice Cube!

Let’s cancel a man who uses his fame and fortune to spread lies about another minority, the Jewish people. This ‘cancelling’ can come in many forms but here is one that I think will send a message to him.

I am calling on ESPN President James Pitaro to remove the 30 for 30 documentary called “Straight Outta L.A” that Ice Cube directed for the sports network.

I have started a petition on Change.org calling for the deletion of this documentary from the ESPN network. In the last 24 hours, we have received support from 300+ signers.

We cannot let this blatant Anti-Semitism from a Hollywood elite go unchecked! There must be consequences for spreading lies and hatred about the Jewish people. Let’s cancel Ice Cube!

About the Author
Bryan E. Leib is a Philadelphia native who lives in New York City. He is the former National Director of Dov Hikind's group, Americans Against AntiSemitism and previously was a Program Director with the Israeli-American Council, and in 2018 was the Republican Candidate for U.S. Congress in Philadelphia. He currently serves on the boards of Americans Against Anti-Semitism and Young Friends of the National Museum of American Jewish History. He tweets from @Bryan_E_Leib
Related Topics
Related Posts
Comments