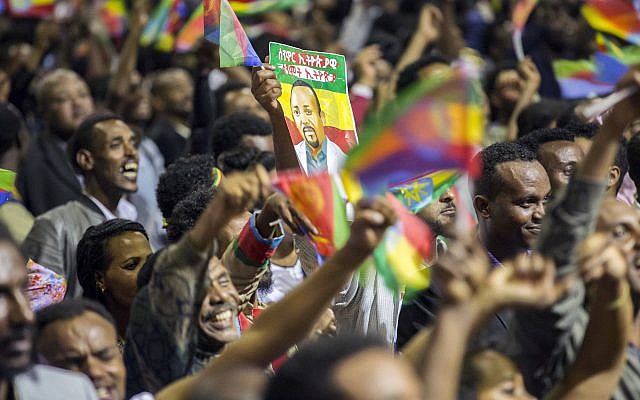 My experience with Ethiopian-Eritrean relations got personal 27 years ago when I was almost lynched by the Amhara, and then shot at by their opponents, the Tigreans — and all because of Eritrea.

Three days after 14,500 Ethiopian Jews were airlifted to Israel in Operation Solomon, Tigrean rebels entered Addis Ababa and, meeting little resistance, took control of the city. I had been covering Ethiopia and the “aliyah” for almost a year. There for the airlift, I stayed for the rebel entry. That first day, the Tigrean forces conquered Addis with little resistance. The next day, I ventured out to the Piassa, the giant plaza in the center of the city, The rebels, the city’s new masters, wore ragged khakis, were bone-thin, with wild hair — they had spent weeks or months in the rugged hills of the Ethiopian highland before entering Addis. Suddenly, there was a droning sound, discordant like a swarm of wasps. Protestors, about a thousand of them, turned a corner and swept into the Piassa, carrying long green branches, shouting with crazy energy, terrified of the rebel soldiers, yet themselves frightening, running with an ecstatic verve that suggested violence.

To my dismay, a hundred of the protestors peeled off and surrounded me, as the others flew onwards. “You’re an American,” they shouted. “You made a deal with the rebels. You let them into Addis Ababa.” “No, I am an Israeli!” I answered. “Even worse!” someone yelled from amidst the crowd. These were Amhara demonstrators, I understood, angry and frightened at having lost power after a hundred years in which their ethnicity had ruled over Ethiopia, Now it was the Tigreans, their northern brothers, allies of Eritrea, who were in charge. And they were right. The Americans had recognized the rebels and had hammered out an agreement with them in London — and Israel — which got the rebels to commit to let Operation Solomon proceed without shooting down the planes as part of the deal.

Not least on the mind of the demonstrators was the fact that the Tigreans had a longstanding pact with the Eritreans and had promised them independence. Eritrea, the northernmost part of what had been for centuries Ethiopia, was colonized by Italy in the 1880s, and developed a separate national identity. After Mussolini’s failed attempt to conquer Ethiopia in the 1930s, Eritrea was handed back to Haile Sellasie’s Ethiopia. But the Eritreans wanted their own country; they had been fighting for independence for decades. Ethiopia was dead set against this. The Eritrea coast provided Ethiopia with its only outlet to the sea. Without Eritrea, Ethiopia was land-locked.

As the crowd frothed around me, furious, I felt I was close to being lynched. Luckily, I guessed that Eritrea was foremost on the protestor’s minds. “Ethiopia must remain united!” I yelled. “We must tell the world of this injustice!” The crowd began to cheer me, but glory was short-lived. The rebels began shooting towards us — the bullets whizzing over our heads. I ran and dove for cover into the dusty plaza.

Ten demonstrators were shot to death that day — one was mowed down right before my eyes, with his hands stretched above his head in submission. The demonstrators were also less than innocent — some of them had grenades hidden in the folds of their clothes. I learned that day in the Piassa how fraught and convoluted the internal relationships are between and within Ethiopia and Eritrea, and how hard it is to predict from whence the next violence would come.

For more violence was soon to come. The covenant between the Tigrean rulers of Ethiopia and the Eritreans was momentary.  By 1999, the two countries were in a bloody war, supposedly contesting the demarcation of a barren stretch of land. 70,000 soldiers died in two years of battles. Aferwerki, who had been Eritrea’s hero, became its monster, drafting just about everyone into indefinite army service. It was his excuse for suspending democratic elections, and presiding over a state so punitive and authoritarian that it earned the title “The North Korea of Africa.”

Over the last decade, hundreds of thousands of young people have fled Eritrea — many deserting from endless army service, but many others because, identified as opponents of the regime, their lives and those of their family were endangered. Still others left Eritrea’s moribund economy to find a better life. Some of these are certainly supporters of Aferwerki’s regime. Approximately 30,000 are now in Israel, which, until now, recognizing the regime’s brutality — and in line with international consensus — has kept to a policy in which Eritreans who crossed illegally into Israel are not returned to their homeland.

But this past week, peace broke out unexpectedly between Ethiopia and Eritrea, and Ayelet Shaked, our nimble Minister of Justice, was quick to use peace as an excuse to threaten Eritrean refugees with wholesale deportation. Escape from endless army service was the reason many Eritreans gave for their flight from the country; if the draft is abolished, Shaked’s logic goes, asylum seekers have nothing to fear. But Shaked’s shoddy logic does not hold water. Peace between Ethiopia and Eritrea does not mean that peace has broken out within Eritrea. There has been no indication, so far, that Afwerki will institute reforms, garner amnesty or loosen his iron grip or his retributions against dissent. Eritreans see peace as meaningless domestically, unless these steps are taken. Some of the asylum seekers in Israel are Isaias’s sworn enemies, who have actively been attempting to organize resistance to what they see as a vicious regime. Human right’s groups agree: Eritrea is still listed, along with North Korea, as one of the most repressive regimes on the planet.

Shaked is attempting to avoid  Israel’s duty, which it has shirked until now: credibly and thoroughly investigate asylum seekers’ stories, and grant refugee status to those whose stories check out. This can be done — it has done in many places in the world. What the state would discover is that some of the Eritreans can definitely be sent back home. Some are reportedly even spies for the Afwerki regime. But many others truly deserve refugee status — peace between Eritrea and Ethiopia changes nothing in that regard. Peace may help, eventually, but as I learned in Addis Ababa — almost losing my life — Eritrea – Ethiopia relations are a volatile and unpredictable affair. And Aferwerki’s need for absolute control over his population likely has nothing to do with external threats.

Our startup nation, founded by refugees,, deserves to be a leader, not a shirker, in determining the status of asylum seekers. Shaked’s ignorant and threatening statements are a mark, instead, of shame.