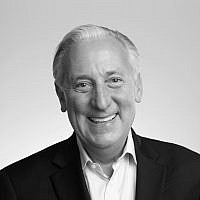 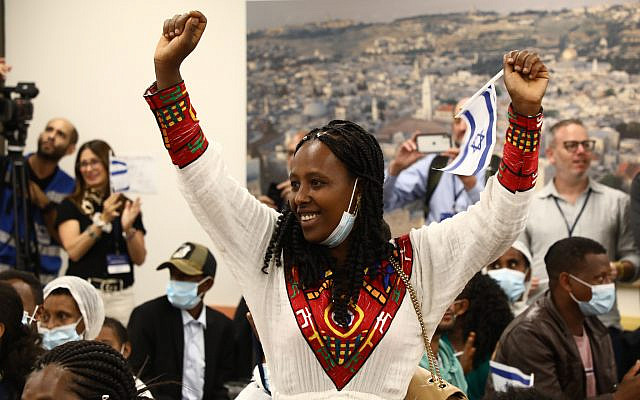 A new immigrant from Ethiopia rejoices at the airport. Credit: Sivan Farag, Jewish Agency for Israel

The women were dressed from head to toe in a sea of white like angels, and the men were wrapped in prayer shawls. At the end of Shaharit services at the synagogue in Gondar, Ethiopia, the devout congregants raised their voices in unison to recite Israel’s national anthem that is so familiar to me, yet felt so different from any other rendition that I have heard. This Hatikvah was more than a hymn; it was a heartfelt prayer uttered by hundreds of men, women and children who have waited years – in some cases decades – to make aliyah and reach Eretz Zion. 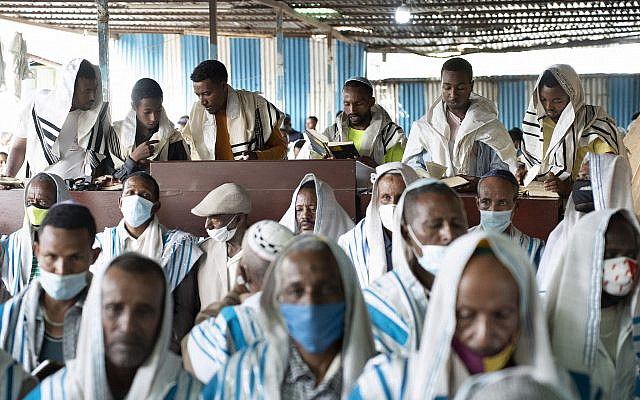 I have been privileged to recite Hatikvah at many locations around the globe – with tens of thousands of marchers on the steps of the Capitol building in Washington D.C., on the ashes of the Holocaust in Warsaw and alongside new IDF recruits at the Western Wall in Jerusalem.  But never has Israel’s national anthem reached the depths of my soul as it did just a few days ago in Gondar, and never have I understood more what is the meaning of hope.

I was privileged to join a delegation of 60 inspiring Federation leaders across the U.S. and Canada and Jewish Agency for Israel officials, including Chairman of the Executive Major General (res.) Doron Almog, on this journey to learn about the rich history of Ethiopian Jewry and visit the community in Gondar that is awaiting aliyah.  During our time together, I heard stories of courage, bravery and sacrifice of our brothers and sisters who made the difficult trek from their villages in Ethiopia to Sudan. I recited a prayer at the Jewish cemetery in Wolloke, where Jews who dreamed of Jerusalem yet never reached the holy city are buried.  And I met teenagers who speak in Hebrew and hope of serving one day in the IDF. 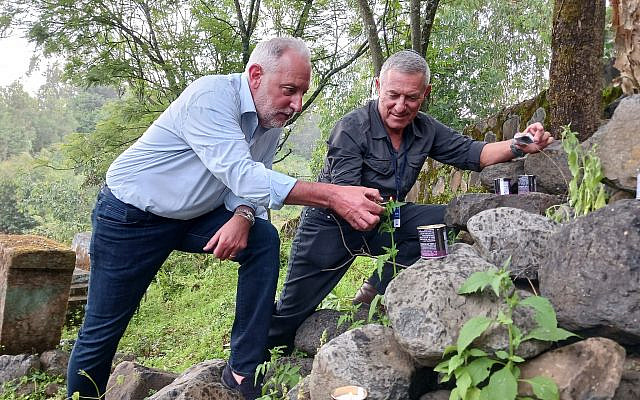 At the end of our meaningful journey, our delegation boarded an Ethiopian Airlines jet to Israel together with 209 new olim. Walking up and down the aisles, I couldn’t help but think to myself, which one of these children will one day be the prime minister of Israel?  Who will grow up to be a doctor or an educator?  How many of them will serve as officers in the IDF? What a privilege it felt to be alongside these heroes who never lost hope that one day they would reach the Land of Israel. After landing in Ben Gurion Airport, we all continued to a ceremony where we were welcomed by Minister of Aliyah and Integration Pnina Tamano-Shata. It was here where the new olim sang their first Hatikvah in Israel, after hundreds or perhaps thousands of times that many of them recited these words in Ethiopia.  But this time, the Hatikvah hymn was not a cry of prayer. It was a song of praise and gratitude that marked the fulfillment of a dream and the beginning of a new journey in the Land of Israel.

These two renditions of Hatikvah are still etched in my heart and I will carry those sounds with me into the upcoming high holidays. When I recite the “avinu malkeinu” prayer and arrive at the stanza asking G-d to inscribe us in the book of redemption and salvation, I will feel overwhelmed with pride knowing that Jewish Federations, in partnership with the Israeli government and our partner The Jewish Agency for Israel, are playing a role in the redemption of our brothers and sisters in Ethiopia and in the ingathering of exiles.  Yet at the same time, I will be reminded that our work is not yet done because the words of Hatikvah can still be heard in Gondar and Addis Ababa.

Jewish Federations will continue raising funds towards our $9 million campaign for Ethiopian aliyah and absorption and we will tell the stories of the brave men, women and children who are still yearning for Zion.  For as long as hope still rests in their hearts, we pledge to be by their side.

To get involved visit www.jewishfederations.org or connect with your local Jewish Federation

About the Author
Eric D. Fingerhut is the President and CEO of The Jewish Federations of North America (JFNA). Prior to his appointment at JFNA, Mr. Fingerhut served as the President and CEO of Hillel International from 2013-19. At Hillel, he led the organization’s Drive to Excellence, which resulted in doubling the number of students engaged by Hillel each year to over 130,000 and the total funds raised each year to nearly $200M. His emphasis on recruiting, training and retaining top talent for the system, and on building a data and performance driven organization, have become models for the non-profit sector. Mr. Fingerhut has also had a varied and distinguished career in public service and higher education. He served as Chancellor of the Ohio Board of Regents from early 2007 to 2011, leading Ohio’s system of public universities and colleges; as Ohio state senator from 1997 to 2006; and represented Ohio’s 19th congressional district in the U.S. Congress from 1993 to 1994. In 2004, he was the Democratic Party’s candidate for U.S. Senate. Mr. Fingerhut received a juris doctorate from Stanford University Law School and a bachelor’s degree from Northwestern University. He and his wife Amy have two sons, Sam and Charlie, and beagles Pedro and Lulu.
Related Topics
Related Posts