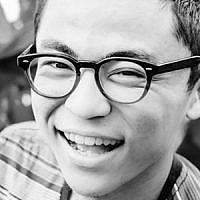 The Blogs
Anthony Berteaux
Apply for a Blog
Please note that the posts on The Blogs are contributed by third parties. The opinions, facts and any media content in them are presented solely by the authors, and neither The Times of Israel nor its partners assume any responsibility for them. Please contact us in case of abuse. In case of abuse,
Report this post. 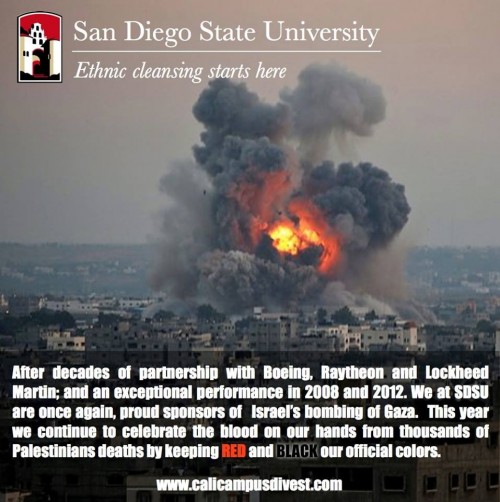 If you had told me two months ago that by the end of summer I was going to be a sympathizer of the Israel, I would have probably laughed in your face.

Two months ago, I was an ardent supporter of pro-Palestinian movements on our campus. I discussed my support of the BDS movement on the San Diego State campus on the radio, I read Al-Jazeera’s coverage of the conflict to feed the fire, I planned to join anti-Israeli protests this summer and beyond. In every aspect, I was emblematic of every liberal college student here in the U.S, supporting the Palestinians (and in turn Hamas) in the name of social justice and equality.

I’m here to admit I was wrong. I blindly followed a cause in which I didn’t understand the political implications of.

What changed everything was the photo shown above, “Ethnic cleansing starts here” which was posted on San Diego State’s division of Students for Justice in Palestine’s Facebook page.

In the instant I saw the photo, I was disgusted, I was appalled, but most of all, I was ashamed. I questioned everything, my beliefs, my politics, and most of all how I had come to support a student organization that would release a hate-charged slanderous message intended to attack our school and it’s students.

Hate, as I believe, is not a pathway towards peace.

In the process of questioning, I reached out to Jewish students here at SDSU and wrote an op-ed article condemning the organization and their hate-speech tactics regarding their message. Upon publishing, the article instigated a conversation about how these organizations isolate, attack and demean students on college campuses who call Israel their home. The Jewish students I interviewed felt attacked and isolated on a campus where they should feel safe.

Especially in a time when prospective students and incoming freshman are seeing our school for the first time, what kind of image do we portray when we allow for student organizations to convey these hateful messages that divide us and embitter us? As a non-Jewish student I was uncomfortable, so I couldn’t possibly imagine what Jewish and Israeli students felt about it.

In just twelve hours of publishing, I received over twenty Facebook messages, some were lovely messages of support, some invited conversation about the issue, and some were messages that accused me of being “Islamo-phobic” and spreading “Jewish propaganda.” The majority being SJP supporters condemning my morality and accusing me of supporting a “Gaza holocaust.”

The messages and responses, initially upset me, but in some strange way, it motivated me. On a conflicted campus, I found peace. The responses only proved my point further. As an aspiring journalist, it was my responsibility, it was my duty, to understand the Israeli perspective, as it was to fully understand the core of the Palestinian perspective.

I couldn’t trust mainstream American media to correctly portray this conflict, as well as other news outlets in which reported on the issue. I read various Israeli news sources alongside Al-Jazeera, and immediately saw biased differences.

Overwhelmingly, Al-Jazeera’s pro-Hamas bias struck me as odd and disturbing. It becomes suddenly understandable  that last year, 22 Al-Jazeera reporters resigned because they were morally disturbed by the bias and “lies” being spewed by the respected news source in light of coverage in the overthrow of Mohammed Mursi.

I stopped pointing and I started seeing. It’s amazing what a change in mindset can open your eyes to.

SJP throughout the Divestment movement on our campus pushed towards a campaign that didn’t invite dialogue towards a solution between organizations but rather a narrative, a story if you must, that demonized Israel and Jewish students, and lead for the public to see Israel as a terrorist state. Their message generates misinformation which leads to an anti-Semitic worldview and an extremist anti-Israel attitude. Their rage is understandable however I have to ask this:

Do the ends justify the means?

Earlier this year, SJP put up their “mock apartheid” wall to symbolize the supposedly apartheid wall that separates the West Bank and Israel. They likened the wall to that which racially segregated South Africa in apartheid, they likened it to the wall of Berlin, and they likened Israel’s policies to that of the Jim Crow laws that segregated African-Americans and whites here in the U.S.

All while posting posters accusing Israel of committing genocide and a Gaza holocaust.

To someone who fully doesn’t understand this conflict, it becomes easy and almost chic to fall for this simple narrative and support SJP. Many students, like myself, have fallen under the allure of SJP’s social justice narrative, and have supported it as such.

However, in retrospect, such gross misinformation and exaggerated comparisons to Jim Crow laws and the Holocaust are deeply insulting to not only Israel but also to those who experienced these horrific tragedies. It further exposes their ignorance as to what apartheid, racial segregation and genocide actually are. How does one equate the Holocaust, an event that strategically exterminated six million Jews, to the the IDF’s defense in Gaza? How does one equate the horrific racial apartheid state of South Africa to Israel?

In fact, SJP, in their slanderous campaign choose to ignore this affinity for diversity in Israel law. Meshoe mentioned that racial equality is “enshrined in Israeli law.”

I looked it up and it’s true.

The Israeli Declaration of Independence states that Israel will ensure the “complete equal rights of social and political rights to all it’s inhabitants irregardless of religion, race, or sex.”

If minority groups on campus didn’t blindly support SJP in the name of social justice, they will realize that the BDS movement they support in itself, conversely belittles their existence.

What interesting about SJP’s approach to conveying their message on campus is not about the message itself, but how the opposing faction, Students Supporting Israel go about conveying theirs.

When you think about it, SSI and students who are pro-Israel can very easily fight fire with fire. In response to the wall, they could very potentially post posters and social media posts about how Hamas is a terrorist group and Islamophobic photos of 9/11 in association with Islam. They could preach how Muslims are aiming to obliterate Israel and the Jews (inaccurate but I grossly overstate to prove a point.) They could do all sorts of things that could counteract the hateful half-truths that the SJP portrays.

The fact is, they don’t. Because some organizations have integrity.

Instead, the SSI at SDSU has worked countless times to invite conversation with the SJP towards a dialogue towards peace. They have tried to invite them to charities supporting Palestinian children and have been met with only rejection.

In retrospect, it baffles me to how the school administration allowed for SJP to blatantly spew hateful lies which mislead our student body and misinform them. It’s one thing to say SDSU supports ethnic cleansing, but it’s another issue when they use the school logo and motto to project this message.

I simply couldn’t, as someone who supports peace, support a movement that would release an image so hateful, that it makes Jewish students on campus feel marginalized and isolated. I couldn’t support a movement, at it’s core, pushes for the obliteration of someone’s home.

However, it becomes harder to pursue a narrative that is against the norm, on a campus where students are misinformed and lead by the status quo. A recent Gallup poll has shown that young Americans are twice as likely to support Palestine, in contrast to Israel.

This isn’t about soley being pro-Israel, because that wouldn’t be accurate or fair. It’s about pursuing a world where you can be both pro-Israel and pro-Palestine.

In a time where cease-fire has yet again been broken, and when peace seems like a far-away concept, I believe it’s crucial to pursue these narratives and stories that affect our campuses and the students here.

This conflict doesn’t end in Gaza, it doesn’t end in Israel, the prejudice and hate generated by this war extends beyond the West Bank and it affects college campuses in the U.S, it affects those living in Tokyo, it affects all those who consider Israel their home, Jewish or not.

This war is destroying Israel, as well as Palestinians, and it is also destroying our college campuses. Until this conflict is resolved, and the hate stops, the facade of peace we will sense on campus and abroad will only be that, a facade.

Until SJP learns to put their hateful tactics aside and learn to co-operate with their enemies to move towards peace on our campus, we will be setting an example for the world that two opposing factions can co-exist in peace. For if student organizations cannot co-exist in peace, how can we expect Israel and Palestine to just be in peace?

As I witness pro-Palestinian parades, anti-Israeli flags and anti-Semitic sentiments being tossed around the world, and in San Diego,and as SJP organizes BDS campaign protests in San Diego, I can only imagine how the conflict will unfold this semester on campus.

Rest assured, it will not be pretty.

Anthony Berteaux plans to continue to blog about campus conflict between SJP and SSI throughout the fall semester at SDSU. Stay tuned!

About the Author
Anthony Berteaux is a third year Journalism student at San Diego State University. On campus he acts as an assistant Opinion editor for his campus newspaper and as a Huffington Post Campus Editor At Large. He is the VP of Public Relations for Student Supporting Israel, his campus pro-Israel organization.
Related Topics
Related Posts
Comments