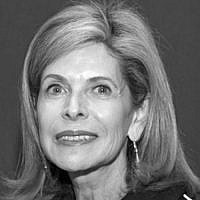 The Blogs
Lydia Shorenstein
Apply for a Blog
Please note that the posts on The Blogs are contributed by third parties. The opinions, facts and any media content in them are presented solely by the authors, and neither The Times of Israel nor its partners assume any responsibility for them. Please contact us in case of abuse. In case of abuse,
Report this post.

My father was born in 1925 in what was then Czechoslovakia, survived the horrors of the Nazi death camps and resettled in Frankfurt, Germany, after the war. Undeterred by the atrocities in his past, he was devoted to serving others, and became a leader of the local community.

I was born and raised in Germany and immigrated to the United States, eventually settling in Northern California.

Many families in the Jewish community have their own version of this World War II narrative. Today, at a time when many young people know little of this tragic period, it is critical that we share these histories, in conjunction with the narratives of other ethnic groups, to teach universal lessons such as preventing discrimination and racial and ethnic hatred.

My personal history shaped my deep commitment to educating California’s diverse population about genocide as well as the core values of inclusion and respect for others. Through the Preisler Shorenstein Institute, the high school education division of the Jewish Family and Children’s Services Holocaust Center in San Francisco, students at hundreds of schools in California are exposed to these difficult, but essential, subjects. Still, the story of the Jews in California and in the United States goes well beyond European Jewry. Jews are of all colors, backgrounds and countries.

For instance, in my state alone, Jews of color represent more than 15 percent of the Jewish population. Tens of thousands of Persian (or Iranian) Jews call California home.

Our state is in the process of deciding how to require and best incorporate ethnic studies into all public school curricula. Doing so is critical to the Jewish community as well as to all other ethnic minority groups, whose narratives, all too often, get lost.

Recently, Gov. Gavin Newsom made the right decision to intervene in connection with a bill that would have required California public schools to teach an exclusionary version of ethnic studies. The governor’s veto gives our state the time to strengthen any future curriculum.

I agree with the governor’s call to “ensure that the draft Ethnic Studies Model Curriculum achieves balance, fairness and is inclusive of all communities.”

Every child, especially those from marginalized communities, should feel validated in California’s public classrooms, particularly at a time of rising racism, antisemitism and white nationalism, in our state, our country and around the globe.

More specifically, because the existing curriculum goes beyond the four foundational ethnic groups, my colleagues and I, through the advocacy campaign #JewsNotIncluded initiated by the San Francisco Bay Area Jewish Community Relations Council, seek the inclusion of American Jewish narratives, a meaningful definition of antisemitism, and “guardrails” to prevent anti-Jewish content from reappearing.

An initial draft of the curriculum had excluded Jews entirely from the list of ethnic groups and, perhaps just as noxious, included anti-Jewish and anti-Israel sentiments rejected by a majority of Americans. A second version suggested by the state Department of Education in August removed the denigrating content but did nothing to remedy the exclusion or educate about antisemitism.

A final draft of the curriculum will be released in November and has an adoption deadline of March 2021.

“In California, we don’t tolerate diversity,” the governor wrote in his veto message. “We celebrate it. That should be reflected in our high school curriculum. I look forward to our model curriculum achieving these goals.”

California now has a tremendous opportunity to draft an ethnic studies curriculum that reflects the common values of the state’s vast multiethnic population. My greatest wish is that this curriculum serve as a model not only for the state, but for the nation—and that it reduce stereotyping and further unify us in achieving our common goals, in the classroom and elsewhere.

About the Author
Lydia Shorenstein is chair of the Holocaust Center Council of San Francisco. She is a supporter of many civic organizations, including Jewish Family and Children’s Services of the San Francisco Bay Area and the Jewish Community Relations Council, the central public affairs arm of the organized Jewish community in Northern California.
Related Topics
Related Posts
Comments