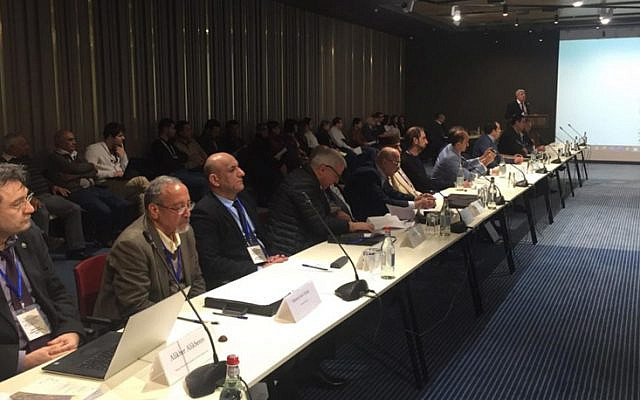 WHY DO IRAN AND RUSSIA SUPPORT THE TALISH POLITICAL MOVEMENT?

A self-styled academic conference on the indigenous peoples of the Caucasus-Caspian region was held over two days in early December in Yerevan, Armenia. The conference was organised by the Chair of Iranian Studies at Yerevan State University and the Oriental Studies Institute of the National Academy of Sciences of Armenia. Several members of ethnic minorities living in Azerbaijan, including Talish, Lezgis and Avars, attended the event. Although the hosts claimed that the conference concerned human rights violations against ethnic minorities in Azerbaijan and constituted an effort to boost Armenia’s relations with Azerbaijan’s ethnic people, the true intention of such events has always been to ignite ethnic tensions in Azerbaijan.

At the height of the war over Karabakh between Armenia and Azerbaijan, Armenian separatists in Karabakh and political emissaries from Yerevan tried to discourage Azerbaijan’s ethnic minorities from fighting on Baku’s side. They sought to create ethnic separatist feelings within Azerbaijan in order to achieve their territorial claims over Karabakh. In other words, Armenia uses academic conferences to advance its national agenda against Azerbaijan.

The main topic of December’s conference was the problems of Talish people, who are the second most populous ethnic group in Azerbaijan, after the Turkic speaking Azeris. Ismail Shabanov, the head of the Talish diaspora in Russia who enjoys special relations with the Russian authorities, attended on behalf of the Talish people. Mr Shabanov heads a Russian NGO and actively supports the ethnic self-determination of the Talish people in Azerbaijan. As the Talish diaspora is mainly concentrated in Russia, Ismail Shabanov’s NGO seized the opportunity to engage politically some members of the diaspora within his pro-separatist political NGO. While the Azerbaijani regime led by Ilham Aliyev has strong ties with Moscow, and regime critics cannot feel safe criticising Azerbaijan from their homes in the Russian Federation, Mr Shabanov and his people on the contrary operate a YouTube channel and websites. There have been some cases of extradition of Talish activists from Russia to Azerbaijan, including Russian citizens. But as a Russian citizen Mr Shabanov easily operates his group and political NGO without facing any such dangers. His strong ties with the Kremlin must shield him from prosecution by the Azerbaijani authorities.

But Shabanov is also the staunchest supporter of the Iranian regime, which can be clearly seen in his interviews and video talks. Following the recent popular uprising in Iran, Shabanov claimed that it was organised by Israeli intelligence and their Western counterparts in order to destabilise Iran. On news sites and in YouTube videos Russian-based Talish NGOs condemn Azerbaijan’s strategic partnership with Israel and accuse Baku of being an Israeli launchpad in the region against Iran. For instance, Shabanov interpreted the recent appointments of the Minister of Internal Affairs and the head of the Security Apparatus by the Aliyev regime in July as the work of Turkey and Israel. Members of the diaspora openly justify their ties with Armenia and Armenian occupied Karabakh separatists by citing the ties between Azerbaijan and Israel. They also condemn Azerbaijan for not being strictly loyal to the Shia religion in its foreign policy.

Interesting, despite the presence of ethnic Talish in Iran, this group does not put forward the idea of self-determination on the Iranian side, only the Azerbaijani. Condemnation of the Azerbaijani government for not being sensitive towards Iran and Azerbaijan’s mostly Shia population in its relations with Israel proves the point that the Iranian regime also supports this movement, as these points are Iranian oriented and have been made by numerous Iranian religious, military and political figures.

WHO ARE THE TALISH PEOPLE?

The Talish are an indigenous people, mainly concentrated in the southern part of the Republic of Azerbaijan bordering Iran, and speak a language related to Persian. The Russian occupation of the Caucasus in the 19th century separated the Turkic-speaking Azeris and the Talish between Russia and Iran, with some finding themselves on the Iranian side of the border and others on the Russian side. There was brief semi-independence in 1993, which collapsed as the idea of ethnic self-determination did not find majority support among the Talish people. As a conservative people, the Talish tend to be religious and today many religious leaders of Azerbaijan are ethnic Talish, such as the Sheikh ul Islam of Azerbaijan Pashazade. Their language and Shia religion make them feel close to Iran.

Advocates of ethnic self-determination always say that the Azerbaijani regime conducts ethnic assimilation policies and does not allow them to have Talish language newspapers, radios, TV channels, schools and higher education in their mother tongue. The exact number of Talish people in Azerbaijan is unknown. Unofficial estimates claim that there are more than 1 million ethnic Talish out of Azerbaijan’s population of 10 million. Changing place names from Talish into Azerbaijani and not giving the Talish language secondary status alongside official Azerbaijani are known grievances. Of course, Azerbaijan needs to provide all those rights to its citizens, particularly to the ethnic minorities. There should be publications, TVs, radios, public schools and a Talish department in the state university and the southern region should be called the Talish region, as it was the true name of the region. The Talish Khanate was one of the Azerbaijani-Iranian khanates which existed following the death of Nader Shah up until the Russian occupation of modern Azerbaijan in the 19th century.

The current dictatorship in Azerbaijan makes all of these problematic, as the state of human rights is poor. State level rights abuses against the critics of President Aliyev’s regime and prosecutions create barriers for the citizens of Azerbaijan in exercising their human rights and this is a double problem for the Talish people in particular as the second ethnic group in Azerbaijan. They should be given cultural autonomy and the state should support its citizen in order to counter Iranian and Russian intelligence services from making use of these grievances to advance their national interests.

WHAT NEEDS TO BE DONE?

As the snap parliamentary elections are approaching, the Azerbaijani authorities should allow the people to elect their representatives. Facing several key challenges Azerbaijan needs to change its ruthless political governance methods and the parliament elections would be a chance to do so if the authorities are genuinely interested in solving the pressing problems. the high rate of unemployment, tribalism, state level corruption, human rights violations, surveillance and control methods are unbearable for ordinary Azerbaijani citizens. Using the political reality, foreign powers such as Iran and Russia can ignite ethnic separatism within Azerbaijan. Therefore, the current failed tactics should be changed immediately. Human rights should be ensured and protected by the state, not abused by it. Talish people and other ethnic minorities should be given their ethnic rights and cultural autonomy alongside their constitutional rights. The rule of law should be restored. Sadly, none of this will be done under the iron first of Ilham Aliyev, as his recent political moves are structural changes to boost his regime rather than real reforms. Azerbaijan should rapidly open an embassy in Tel Aviv or Jerusalem and strengthen its ties with Israel on multiple fronts to counter Iran’s malign activities against its territorial integrity.

About the Author
A native of Azerbaijan, I write extensively on political developments in the Caucasus, Iran and the Middle East, including for the website www.astna.biz. I have a Masters' degree in International Politics & Human Rights from City, University of London.
Related Topics
Related Posts
Comments