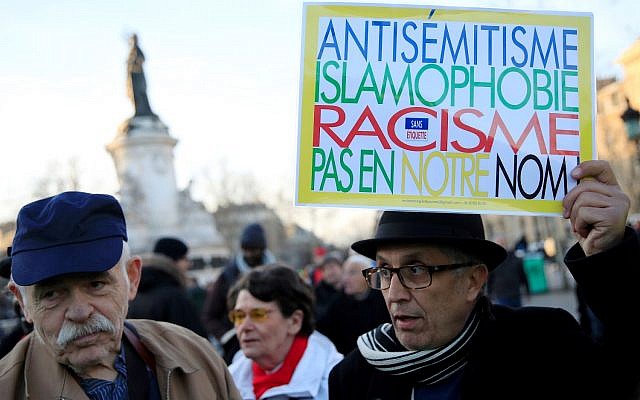 FILE PHOTO: People attend a national gathering to protest anti-Semitism and the rise of anti-Semitic attacks in the Place de la Republique in Paris, France, February 19, 2019. The writing on the sign reads: "Antisemitism, islamophobia, racism - not in our name". REUTERS/Gonzalo Fuentes/File Photo

I emigrated to Israel 45 years ago. When I was young and living in Leningrad (today St. Petersburg, Russia), walking down the city street one day, I witnessed a man suddenly violently attack a Jew and instinctively intervened to protect him. The aggressor was arrested and I was taken to the police station to make a witness statement. When I asked the police officer what kind of punishment the assailant would receive, he replied: “Two weeks in jail,” explaining that such behavior would not be tolerated, and he added, “I don’t care what he was thinking or feeling, we’ve received high-level instructions to stop anti-Semites because they help the Zionists. If there’s anti-Semitism seen here, more Jews will want to leave Russia for Israel and this is not in our interest. Jews are a useful and beneficial force: workers, engineers, scientists, teachers, doctors. We want it to stay that way, so we fight for it.”

Back then, if someone even dared to say a word that sounded anti-Semitic, they would be sent to jail. Therefore, even if deep inside the police officer harbored anti-Semitic sentiments, he would never outwardly express them. But what I did understand from the officer’s explanation was that Jews were not necessarily loved, they were actually hated, but they were needed to advance national interests and thus were useful in the service of the nation’s pride. After all, if the Jews were expelled, who would be the chess champions or space explorers? It’s not that the Jews were so bold or dominated all the key positions, but they held respectable, solid professions. Afterward, the situation changed. At the point when Jews became the bankers or the wealthy with no other contribution to make other than being rich, they were no longer considered indispensable. Therefore, the open anti-Semitism once prohibited was gradually allowed to surface.

Those memories from my youth come flooding back today when I see the uncertain future of European Jewry, particularly from the perspective of the new generation. While they are not being formally expelled from their countries of origin, they could be forced to leave by rising anti-Semitism. Since the Jewish contribution to society seems to be overlooked and unrecognized nowadays, the associated protective shield surrounding them has also virtually been lifted. Today, four of ten young European Jews do not feel safe and have considered emigration due to rampant anti-Semitism in their countries, according to a recent survey conducted by the European Union. As troubling as it may seem, I see it as a positive report since it shines much needed light on a problem that cries to be addressed without delay. The call to action is clear: to start working to unite as Jews, to become one diverse yet monolithic body. As such, we will be safe anywhere we live.

Anti-Semitism has not resurged in Europe, it actually never left. In the current more permissive climate, it now displays itself in more open, evident and widespread ways from myriad directions: neo-Nazis, the far left and radical Islam. It is raising its head both online and in the streets of major European cities. France, for instance, experienced a 74% increase in anti-Semitic incidents just last year. Germany and the UK registered record numbers of hate crimes against Jews, with an average number of 100 cases each month per country, according to monitoring groups.

It is not surprising then that the new survey commissioned by the European Union’s Agency for Fundamental Rights revealed that more than 80% of respondents aged 16-34 perceive a rise in anti-Semitism or have experienced anti-Semitic harassment in their homeland countries. Half of them prefer not to wear or carry items that openly identify them as Jews.

The loss of safety among European Jews should not be accepted as a new norm. Also, we should not wait for the situation to worsen before we react. As it is written by our sages in the book Shem Mishmuel, “When Israel are ‘as one man with one heart,’ they are a fortified wall against the forces of evil.” This means that in order to stand firm as a single united front in face of the great challenges, the young generation of Jews face on the Old Continent and elsewhere in the world, our single goal as Jews must be to focus on our connection as a people.

Why can unity guarantee our safety? It is so because the pressure against us from the nations of the world is rooted in their instinctive feeling that Jews are failing to fulfill their role, which is to unite. By connecting above all differences, Jews provide an example to the world, a world so hungry for tranquility, peace and fulfillment. Therefore, the external demands upon the Jewish people are expressed as hatred that will not cease until we deliver the remedy revealed to us to cure an ill world.

This is the reason the good future for all depends solely on us. This is the contribution to human society we are expected to deliver. As it is written by the greatest Kabbalist of our generation, Rav Yehuda Ashlag (Baal HaSulam), “It is the wisdom of faith, justice and peace which most nations learn from us, and this wisdom is ascribed to us alone.” (The Writings of the Last Generation)

When we Jews are bonded together, we succeed. When we forget who we are and fall into separation and hatred, our enemies fall upon us. Our unity is our strength, and when we finally revive our brotherly love, no enemy will be able to harm us and we will find that the road to peace is wide open and boundless.