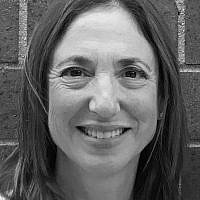 The Blogs
Deborah Singer Soffen
Apply for a Blog
Please note that the posts on The Blogs are contributed by third parties. The opinions, facts and any media content in them are presented solely by the authors, and neither The Times of Israel nor its partners assume any responsibility for them. Please contact us in case of abuse. In case of abuse,
Report this post.

On the 75th Anniversary of the Liberation of Auschwitz, it seems like a good time to call on world leaders to do as you say. If you are truly committed to stopping anti-Semitism, STOP SUPPORTING the hate-filled curriculum of the Palestinian and UNRWA schools.

At the World Holocaust Forum 2020 in Jerusalem, where 50 heads of state have gathered, I just heard many speeches from world leaders. One after another, an impressive line-up of dignitaries including President Putin, VP Pence, Prince Charles, President Macron, and President Steinmeier pledged to fight anti-Semitism, to say no to hate, to say no to intolerance. I heard pledges to be vigilant, to commit to taking action to defeat the lies and dehumanization of Jews that was the prelude to The Shoah, and is once again rearing its ugly head throughout Europe, The United States, and the Middle East. I heard Prince Charles so eloquently state, “We must be fearless in confronting falsehoods and resolute in resisting the words and acts of violence.” I heard President Macron say, “I truly believe that education is our antidote that will protect us against anti-Semitism.” I heard President Steinmeier of Germany state that “We understand the past better than the future,” admitting guilt for the past, and committing in the future to protect Jewish life, to defeat hatred, and to stand with Israel.

Leaders of Europe, if you mean what you say, finally do the right thing and stop funding the anti-Semitic education of the Palestinian children. “Be fearless in confronting falsehoods and resolute in resisting the words and acts of violence” riddled throughout their curriculum that dehumanize Jews, delegitimize Israel, and encourage impressionable schoolchildren to kill us once again. This curriculum is currently supported by the same nations who were represented here today, pledging to say no to hate and no to anti-Semitism, with the exception of the United States who recently took a stand and refused to continue financing their hateful rhetoric. Schoolbooks translated from Arabic have been brought to your bodies of legislation, and yet you still fund this education unconditionally. You turned a blind eye in the 1930’s to the same dehumanizing vitriol of the Nazi party against the Jews. Maybe if you had acted then, six million Jews would not have been murdered. Now is the time for not just words, but deeds.

Brainwashing children in the Muslim world against Jews and Israel is a seed that is sowed each school year, and is a key reason for the rise in anti-Semitism that has washed up on your shores and ours. Education can be an “antidote” to hate, or can be an instrument of hate. If you are true to your word, you will tell UNRWA that you will only continue funding them if there is meaningful reform of their education system, including verifiable oversight and accountability. Hold the Palestinian Authority to the same basic standard of “tolerance of the other” that you just pledged on behalf of your own countries. You would never allow distribution of such anti-Semitic materials in your schools. Don’t be complicit in theirs!

About the Author
Dr. Deborah Singer Soffen is a pediatrician and child’s rights activist. She co-founded 'UNRWA: Stopteachinghate,' made up of representatives of the informal caucus of Jewish NGO’s at the UN and like-minded friends.
Related Topics
Related Posts
Comments