The Blogs
William Echikson
Apply for a Blog
Advertisement
Please note that the posts on The Blogs are contributed by third parties. The opinions, facts and any media content in them are presented solely by the authors, and neither The Times of Israel nor its partners assume any responsibility for them. Please contact us in case of abuse. In case of abuse,
Report this post. 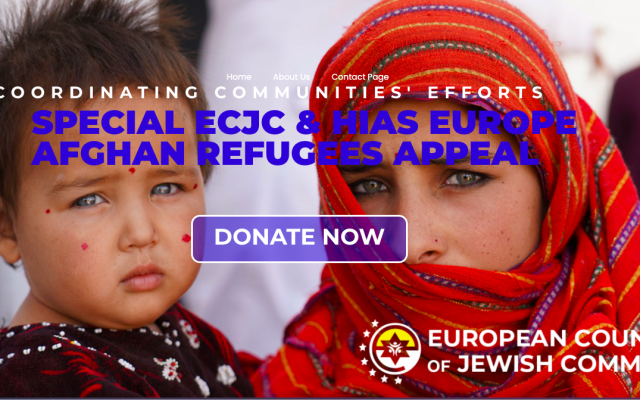 As Afghan refugees fled the Taliban takeover, Europe rushed to evacuate thousands, yet simultaneously shut its door to prevent others from finding safety. Fortunately, HIAS and the European Council of Jewish Communities have launched an emergency campaign to offer support.

Though American in origin, HIAS has become the global Jewish voice for aiding refugees. More than a century after its birth in New York, it operates around the globe, from Kenya to Colombia.

Just before Rosh Hashanah, almost 20 representatives of European Jewish groups including me assembled at the Brussels Sephardi synagogue to celebrate the second anniversary of the opening of HIAS’s first full-fledged European Union office. The day before, HIAS joined European civil society organizations to sign a statement calling on European countries to evacuate Afghans facing immediate security and safety risks and to scale up humanitarian assistance.

“When we sit down at the table with other European humanitarian agencies, we are almost always the only Jewish voice,” said Ilan Cohn, the director of the Brussels office. “It’s important there be a Jewish voice: our Jewish history full of wandering, emigration, and displacement helps us understand the refugee plight.”

At the Brussels meeting, Chief Rabbi of Brussels, Albert Guigui spoke of his childhood in Morocco, when HIAS arranged with Morocco’s King Hassan for the migration of his country’s huge Jewish community. He called upon European Jews to support HIAS’s mission of rescuing Jewish and non-Jewish refugees as a religious imperative.

HIAS still helps Jewish refugees. But these days, Jewish refugees are few and far between and all have Israel as a haven to welcome them. Most of HIAS’s present-day efforts are directed to non-Jews.

“We all know of HIAS successes in previous decades, helping Jews escape tyranny and persecution, and among Jewish communities, many are in fact direct beneficiaries of their tireless work and generosity,” said Ariella Woitchik, the European Jewish Congress’s Director of European Affairs.  “Today, it continues to do inspiring and essential work, helping displaced and persecuted people of all faiths and origins across the world.”

Our advocacy for refugees has its challenges. We face anti-Semitism from some European NGOs and cannot partner with organizations that are anti-Semitic, regardless of the work they do.

Another challenge comes from within European Jewish communities themselves. Like many other Europeans, European Jews often feel beleaguered and threatened by the influx of mostly Muslim refugees to the continent. Most European countries have responded to the Afghan crisis by reinforcing border controls.

HIAS’s motto, in contrast, is “Welcome the Stranger, Protect the Refugee.”  It supports European Jewish communities that wish to engage and assist newly arriving Afghan refugees. The Afghan Refugees Emergency Appeal provides technical and financial support for Jewish community organizations in Europe that wish to help Afghans. An online seminar is scheduled for September 23.

Encouraging signs are visible.  In Italy, the Union of the Italian Jewish Community, UCEI, will take the lead in welcoming and hosting 25 families evacuated from Afghanistan. When the Italian authorities release the refugees from quarantine, the Jewish community will step in to provide housing, phones, hygiene kids, and mental health support.

A record number of citizens, including women, children, and ethnic minorities, are facing severe threats to their lives. If your community wants to respond to this humanitarian crisis, please contact HIAS at hiaseurope@hias.org.