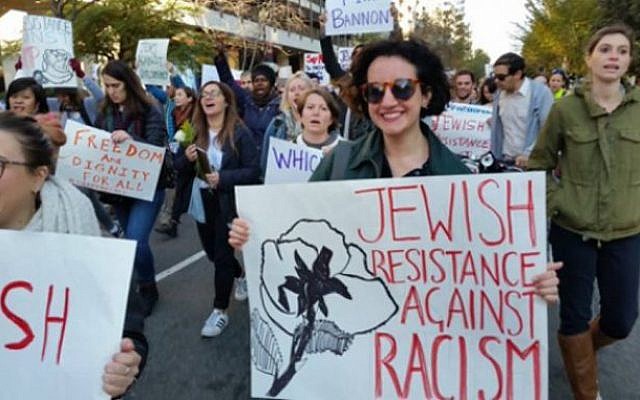 Never, because racism is rooted in hatred. This hatred is sometimes disguised as seriousness but the racist cannot go so far as to be happy.

This truism came to mind when I saw a racist talk by a rabbi who takes himself very serious, reasons cleverly but has too little insight or wisdom in the matter.

(Normally, rightwing Jewish racists don’t talk as “finely” and distinguished as this rabbi. Generally, they blatantly and roundly call all Arabs dogs or animals. It’s been my honor and pleasure to argue them into a corner. My approach goes like this. Your anger gives away that you believe in them having free will. You wouldn’t be angry at a mean dog. So, if they have volition, like you and me, they can’t be inherently evil. If they were, they would be innocent of anything. You need to stop being a racist because this is soiling rightwing thought. And that you don’t want to do.)

This online racism comes now leaders of the Jewish communities in Europe have been begging Israeli politicians to stop talking with far-right European politicians. They just use Jewish friends as their kosher mark to keep up the pretense that they would be decent and not xenophobic.

It is total nonsense to think that because Israel is fighting against Islamic hatred of Jews, Muslims must be the enemy, and far-right is the enemy of Muslims so the far-right must be our friends. This is just a new form of the well-tried trick of playing Arab Palestinians and Israeli Jews against each other. Divide and conquer. The weapon produces win big time.

In Europe, there are now even a few Jews who hold that the far-right is pro-Jews. It shows their anxiety. Desperation is a poor guide to life.

It is good and well to reject racism, be incensed about it but it can help many people if you can formulate why. “This is not nice” is a beginning but perhaps not powerful enough. And being able to reason against white supremacy also leaves you free to continue to be happy and loving – which will attract more people than you responding with hate speech.

The basic mistake in this rabbi’s white-supremacy talk is the following. He says: Jews must be a separate people and so must all other peoples be protected against assimilation.

(He doesn’t talk biological racism; his point is cultural supremacy – and then he confuses cultures (Western/non-Western) and worldviews (Post-modernist Christianity and Islam) which in Judaism are one.)

Then he violates what he himself and the Torah say, that Jews must be a special case. Jews are the only nation founded on a mission. We must spread G^d’s Word. Without that, Jews could/can assimilate. But Italians have no obligation to spread pasta and pizza. They can mix with snail eaters (the French) and beer drinkers (the Germans). (Sorry for the stereotypes, but allow us to use prejudices to actually get rid of them.)

What other arguments can we present against his mistake?

The whole of Orthodox Judaism is drenched in anti-racism, starting with our Bible, opening with the well-known story that we are all from one stock, all stem from one pair of founding people, Adam and Eve. Further, each person should be judged for who they are, not where they come from. And cultural supremacy goes out of the window too with the principle, adopted by the rabbis, to embrace truth wherever you find it.

Also, when cultures mix, they enrich each other. Same with gene pools. The idea of racial or cultural purity is bogus. Produce from monoculture and inbreeding actually is biologically weaker. Isolationists who fear fair dialogue with other belief systems and worldviews really look feeble too.

Besides, the rabbis teach us that one rationale for the Jewish dispersion was so that the Jews could pick up Gentile converts with beautiful character traits that were underrepresented among us.

Let’s admit that not all traditions may be equally good. But generally, each ancient set of customs has filth in it and should start cleaning it up. No reason to point fingers at others when your own background is not cleaned yet. (Look at how Judaism still treats homosexuals – as pariahs.)

Last but not least, the free marketplace of ideas. Some philosophies of life are worse than others. Not to hurt people is better than to hurt. Being humble is better than arrogant. Instead of condemning others, show that you have a better idea. Fulminating for white supremacy will not win out. Nor will the hateful, serious or sour face that goes with it.

Racists are all natural losers and we are all invited to give them checkmate and welcome them warmly into the anti-bigotry circles.

Be anti-racist, be happy.