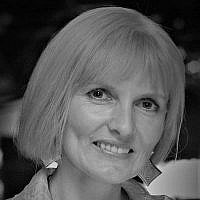 With the pandemic still dragging on and the prospects bleak for a return to normal, any cultural event in Paris is perceived as a gift from heaven. Especially events of such magnitude as the solo concert of the pianist Evgeny Kissin at the elegant Théâtre des Champs Elysées – a theater built in 1913 in the early Art Deco style, which made history almost immediately for offering its stage to Diaghilev’s revolutionary “ballets russes.”

Not a seat remained empty last Saturday, January 22, when Kissin played a stunning programme of Bach, Mozart, Beethoven, and Chopin. He dedicated the concert to the memory of his beloved and only music teacher Anna Pavlovna Kantor (1923-2021), who passed away in July last year in Prague, where Kissin now lives with his family. Kantor taught the child prodigy from the age of six at Moscow’s Gnessin music school. After the sensational performance of twelve-year old Evgeny at the Moscow Conservatory on March 27, 1984, Kantor whisked her ward away from the hype surrounding the new star.  Kissin then spent the rest of the school vacation in the quiet town of Zvenigorod, and seems to have avoided the malaise of stardom ever since. He projects modesty, the joy of sharing beautiful music and respect for his listeners, and perhaps this is why he is so generous with encores. And so it was last Saturday – Kissin obliged the enthusiastic audience and played four encores, one piece from each of the four composers on the programme. 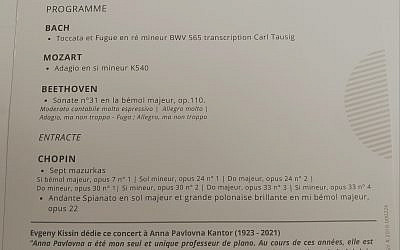 Speculating once about an alternative profession that would suit his character and interests, Kissin said that he could imagine himself as an “absent-minded librarian.” However, despite his soft smile and aura of serene detachment, Kissin does not live in an ivory tower. Among Jewish performers of world renown, his is probably a unique voice that consistently and passionately defends Israel, speaks out against the rise of Antisemitism in the “civilized” West and advocates for various political causes. A few years ago, he specially flew into Moscow to give a free solo concert at the Anna Politkovskaya memorial evening. He does not find it beneath himself to sign petitions and letters of protest, including an open letter to the director of the BBC about anti-Israeli propaganda in the network’s broadcasts or a video address to Putin demanding the release of the jailed opposition leader Alexey Navalny and all political prisoners.

In 2013, Kissin proudly received Israeli citizenship – a gesture of solidarity with the country whose musicians and academics faced an unfair and humiliating boycott at the time in most European countries and in the USA. Kissin said then that he should also be treated as in Israeli, and those haters of the Jewish state who violently disrupted the concerts of Israeli performers should do the same at his own.

Israel remains a special place for him. Last October, he marked his 50th birthday by giving a recital in Jerusalem with all proceeds donated to the Jerusalem Music Center. He was awarded an honorary doctorate from the Hebrew University of Jerusalem and Ben Gurion University in Beer-Sheva. Kissin is a true globe-trotter, who has lived for extended periods in New York, London, Paris and now Prague. But he wants to be identified as an Israeli. I am not sure that the public at large is quite aware of that though, and the organizers of his concerts prefer to silence this fact of his biography. There was certainly no mention of Kissin’s Israeli connection in the extensive biographical notes in the programme of last week’s Paris concert. In France, the rising Antisemitism, vaguely camouflaged as the politically correct anti-Israel rhetoric, stems not only from the substantial Arab community but also from the political elite and left-leaning intellectuals. Not to “compromise” the maestro in the eyes of this last category – his most likely admirers – Kissin is routinely introduced just as a Russian musician.

Meanwhile, the pianist proudly wears his Jewishness on his sleeve. In an interview to a russophone Israeli journal he recalls his first Jewish awakening. It happened in one of the state-sponsored vacation homes for composers where a teenage Kissin, already an international celebrity, stayed with his family. There he became friendly with composer Rafail Khozak who showed him the book he was secretly reading in the privacy of his room —  Max Dimont’s Jews, God and History – illegally smuggled into the USSR. Khozak was the first to explain to Kissin that “Arafat is not a fighter for freedom and justice but a terrorist and murderer; that the USSR is the most anti-Semitic state in the world; that Arabs always attacked Israel, and not the other way around and that the media are full of lies.” (https://jew-observer.com/iskusstvo/evgenij-kisin-skolko-prosyat-stolko-starayus-igrat/)

In the late 1980s, Kissin began to study Yiddish, which became a life-long passion. With time, his admiration for the language and its rich literature brought him to record his readings from different Yiddish poets. He also composes poems in Yiddish and since the start of the pandemic he has been writing the “Corona Virus Diary” in this language.

One of Kissin’s most beautiful and touching Yiddish poems was written in memory of Boris Nemtsov, a charismatic and influential opponent of the Putin regime, shot near the Kremlin walls on February 27, 2015.

Kissin found a fitting tone to mourn Nemtsov by placing his tragic and untimely passing in the Jewish context. Nemtsov was killed on Friday evening and the poem starts by describing angels who hurry down to earth on erev Shabbos. Killers who performed their evil deed “in the dark” made of their victim “a martyr and tsaddik” – as Jewish wisdom has it, only tzaddiks die on Shabbos. As much as it is a heartfelt expression of grief about Boris Nemtsov’s death, the poem is also a celebration of the courage of his “Yiddishe mama” who walked “along her path of grief without tears.” Indeed, Dina Yakovlevna Nemtsova, then in her mid-eighties, struck everyone by her strength and amazing composure, as for long hours she stood calmly by the coffin in which her son’s body lay in state.

Nemtsov, who was halakhically Jewish, was buried according to the Orthodox Christian rite.  While he mentioned in an interview that his paternal grandmother had baptised him as a young child (much to his mother’s outrage), he did not appear to identify much with Christianity. Curiously, in 1989 when Nemtsov ran for the Congress of People’s Deputies, his campaign posters read “Boris Nemtsov, Jew.” Friends tried to talk him out of this odd advertisement, reasonably suggesting that he would have no chance of success in the anti-Semitic country. With his characteristic sense of humor, Nemtsov responded that he preferred to state this himself, otherwise someone would definitely deface his flyers by scribbling it. Conceived as a monologue addressed by one Jew to the soul of another, Kissin’s poem restores an important part to the memory of Boris Nemtsov.

In addition to original texts, Kissin also translates into Yiddish, anything from Russian popular songs and classical poetry to Hamlet’s monologue. To those who think that Yiddish is dying out this may seem an extravagant and superfluous activity. But language is alive as long as someone speaks, thinks and creates in it. It is alive as long as it sounds … like music.