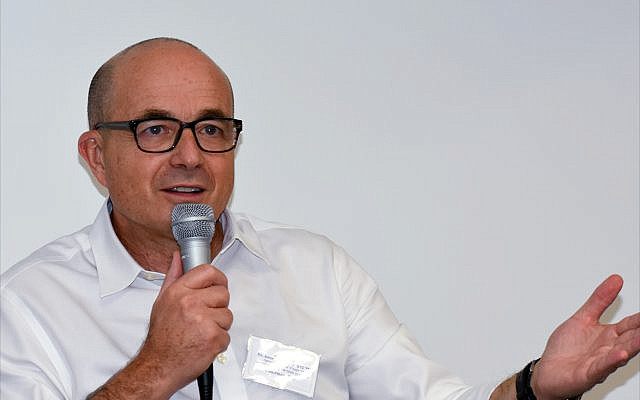 Pharmaceutical industry guru Jeremy Levin believes his company is on the cusp of winning approval for the first drug that actually treats the underlying cause of Angelman syndrome.

“I’m one of the smallest companies in BIO, but I can tell you the president of the United States knows about Angelman, and so does [Speaker of the House] Nancy Pelosi,” he boasted. “Why? Because I forced it down their throats.”

Levin, 66, was born in South Africa, grew up in Rhodesia (present-day Zimbabwe), studied in the U.K., and lived for a time in Israel. He now resides in New York. 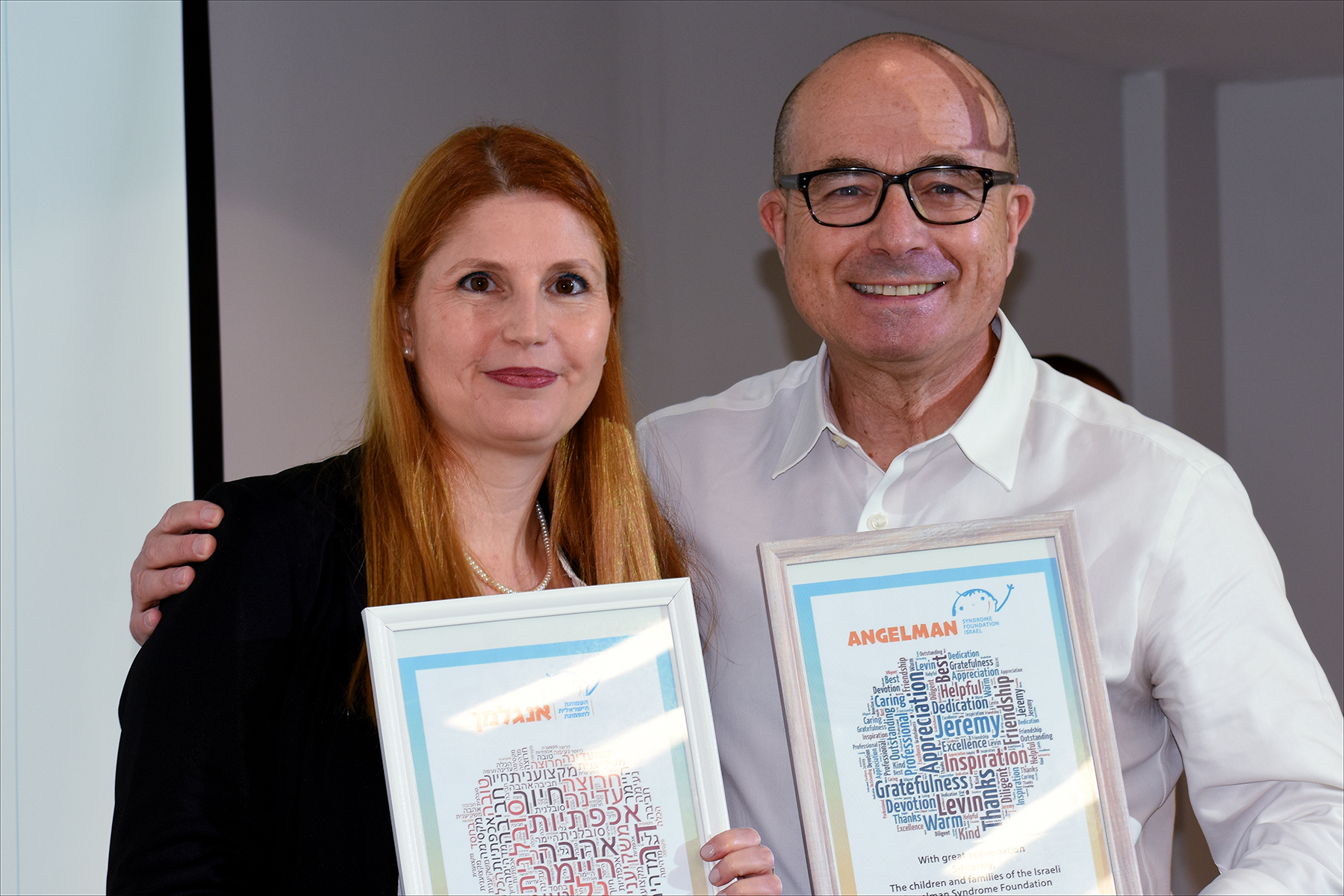 “The progress that has been made in Angelman over the last few years is remarkable. It’s just stunning,” said Levin, speaking at a Dec. 5 gathering of parents of Angelman children hosted by Israel’s Sheba Medical Center at Tel Hashomer. “Until recently, not one company believed you could develop a therapy for Angelman. Every time I spoke to a venture capitalist, they made me go away. So I said enough. We’re going to do it ourselves. All the money I got from Teva went into Ovid. And I put my family’s money into it. I didn’t wait for venture capital.”

Levin, estimating that Ovid has invested around $100 million in this experimental therapy, insisted that for himself, “it’s not about money, it’s about making a difference.”

OV101 is a small molecule derived from muscimol, a compound naturally found in mushrooms.

Results from the recently completed Phase 2 study (NCT02996305) — also known as the STARS trial — showed that OV101 improved the clinical global impression involvement (CGI-I) score as well as sleep, behavior, and motor abilities in adolescents and adults with Angelman. Ten of the 78 patients who completed the STARS were in Israel; the remaining 68 were seen at 12 clinical sites throughout the United States.

Ovid’s positive results with OV101 in 2018 led the company to launch its pivotal Phase 3 NEPTUNE trial involving 60 children ages 2-12 over a 12-week period. Last September, the company announced it had randomized its first patient, with top-line data from the trial to be available in mid-2020. 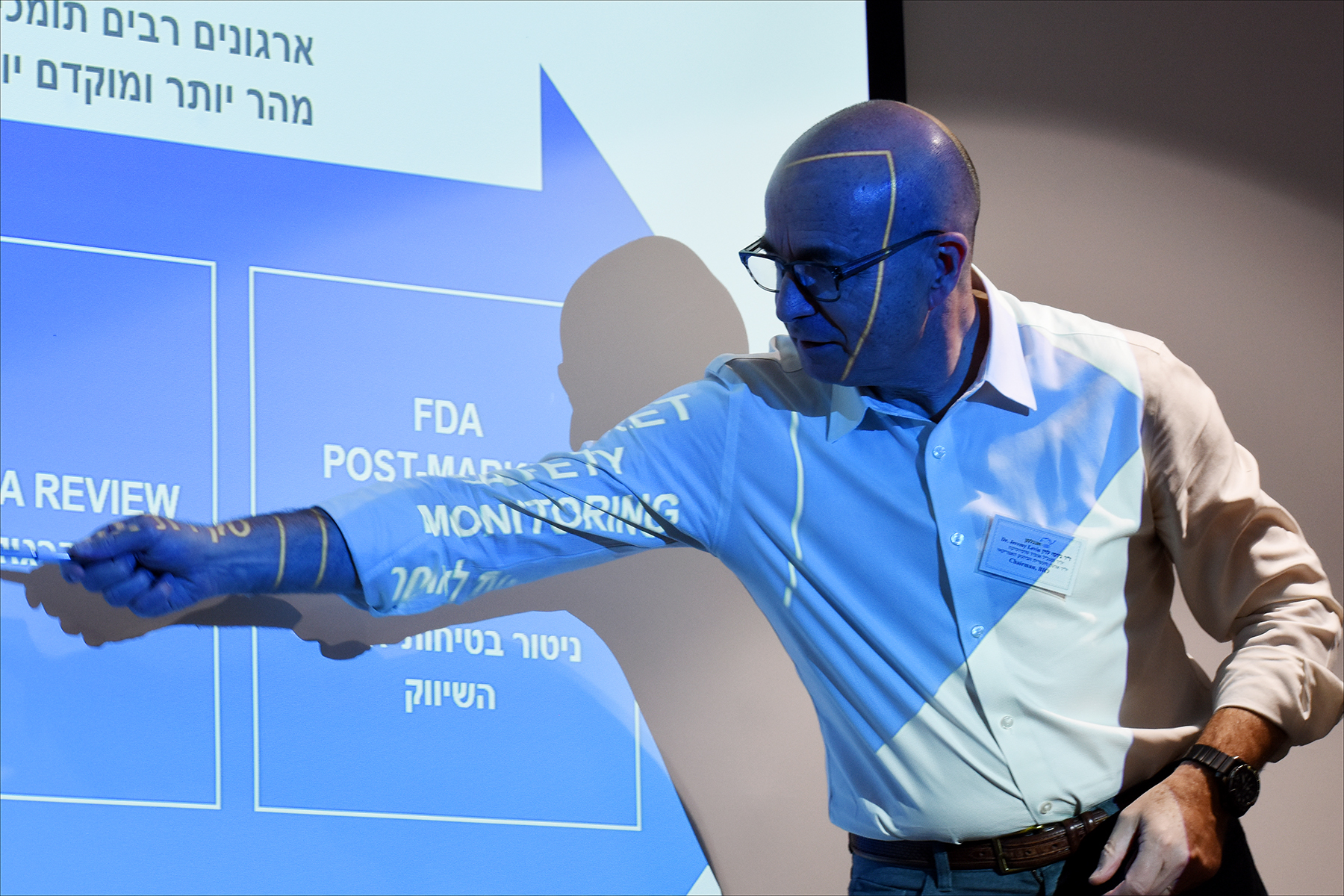 The coronavirus pandemic has slowed clinical trials for pharmaceutical companies across a wide spectrum of rare diseases. Nevertheless, Levin hopes that by year’s end, OV101 will win approval from the U.S. Food and Drug Administration (FDA) as the first-ever therapy to treat Angelman syndrome.

“And then, as others come, you’ll be able to layer it on, combine them, and offer real options,” he said. “This is the beauty of OV101. It’s a simple pill, once a day. Many other therapeutics are complex, but they also hold great potential. We need to explore them, even though they’re not in the clinic yet. But they do show effects on animals.”

Levin spoke at Sheba Medical Center because that institution is already home to the first specialized Angelman clinic outside North America to be accredited by the Chicago-based Angelman Syndrome Foundation. That clinic, run by Israeli pediatric neurologist Gali Heimer, now ranks as the fourth-largest Angelman clinic in the world; only two U.S. clinics and one in the Netherlands treat more patients.

Levin said his company believes that one of the core underlying disorders in Angelman is an inability to distinguish between a signal and random noise.

“Imagine not being able to tell the difference between someone touching your hand and someone slapping it. Imagine a whisper sounding like a shout. Imagine a smell turning into something unpleasant, a little taste suddenly filling your mouth,” Levin explained. “This is controlled by a special physiological process in your brain called tonic inhibition. In Angelman, it affects every single brain cell. The question for us is, can we fix that?” 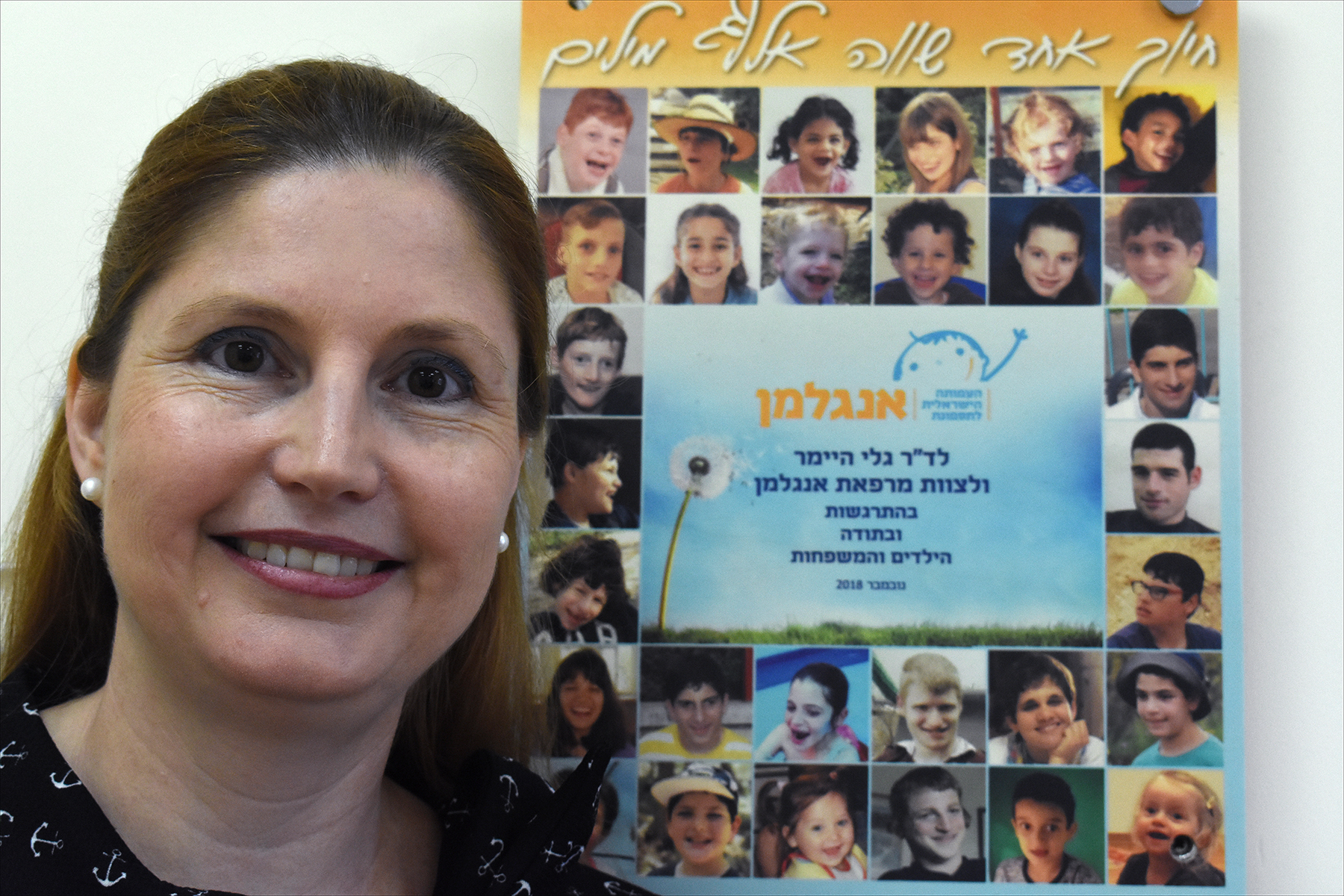 Gali Heimer, MD, is director of Israel’s Angelman Syndrome Clinic, which is part of the Sheba Medical Center at Tel HaShomer. (Larry Luxner)

He added: “We bought this drug from another company. They had it on a shelf. It was doing nothing. But they didn’t understand their drug. We decided we’d work with Angelman, because its mechanism of action could fix tonic inhibition if you could only get the dose right. That’s why we ran the STARS trial.”

After consulting with the FDA, Ovid launched its NEPTUNE trial.“My guess is that if we’re successful, we will never again have to do a trial on adults or adolescents,” he said. “We will take all that data to the FDA and ask that they approve it. If it works, then we’ll really go for it. Every single [Angelman] child needs to have this medicine.

The idea is to enroll 60 people and screen them for 28 days.

After the 12-week period, those who received OV101 will be compared statistically against those who didn’t, using an endpoint called the CGI-I-AS severity scale.

“You don’t know, and you shouldn’t know, which child gets the medicine and which doesn’t. I apologize for that, but it’s the only way we can have a real scientific measure. Nobody knows — not even the doctor giving it to your kid,” he said. “We have to do it this way.” 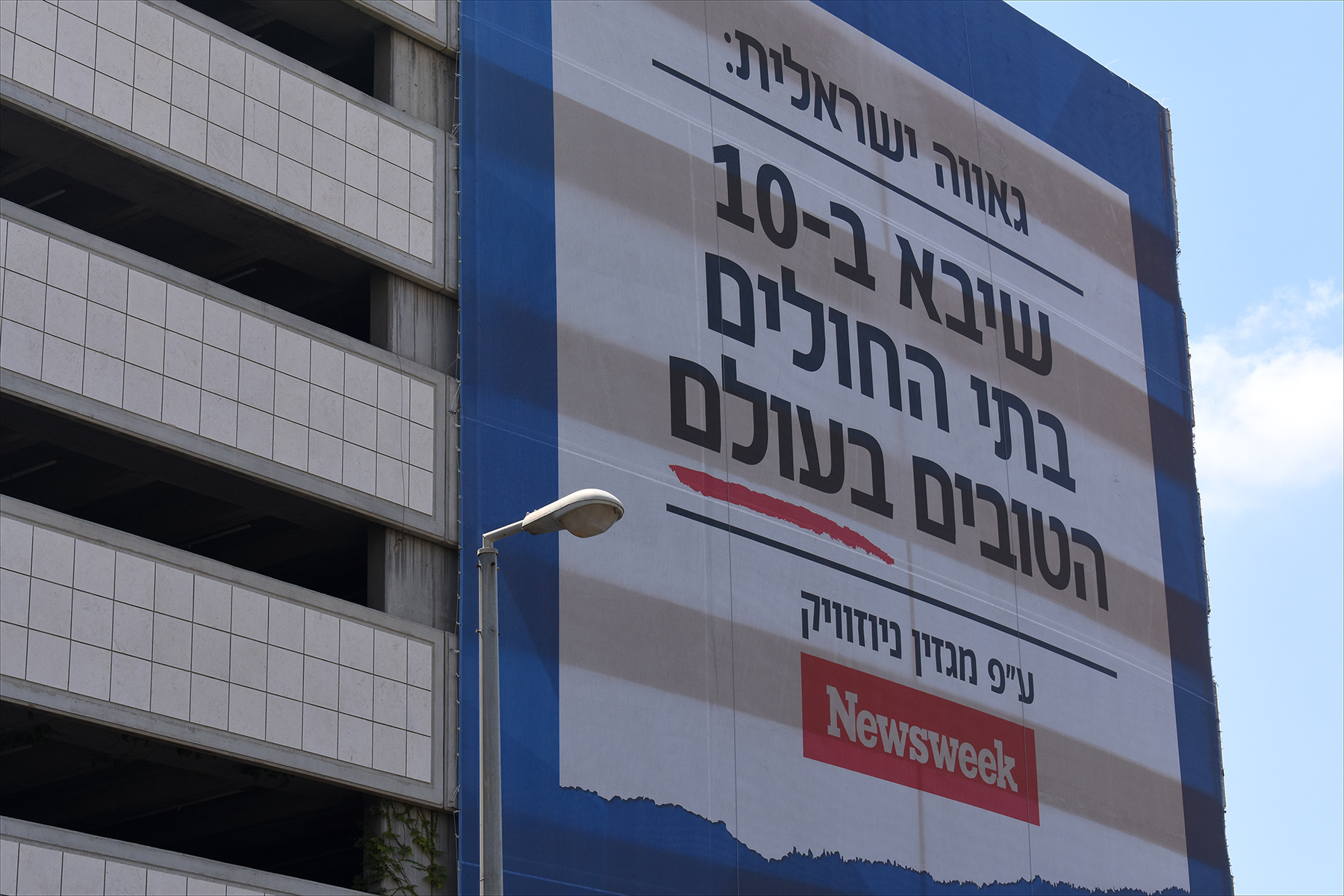 Levin said he plans to ask the FDA to approve OV101 for Angelman patients of any age.

“We picked 49 only because it was a number. In the medicine world, it means an adult. So anybody up to 70 or 80 could get it,” he said, adding that unlike in Israel — where virtually all Angelman patients are known to the community — the situation in the U.S. is quite different.

“Many of the families have abandoned their kids years ago in long-term facilities. We believe there are thousands of adults in such facilities who have a diagnosis of Angelman. It will be very difficult, but we’ll find them, even if it takes two or three years,” he said.

The high cost of treating rare-disease patients in general isn’t lost on Levin, who estimates that antisense oligonucleotides (ASOs) for other diseases such as Duchenne muscular dystrophy and spinal muscular atrophy now cost on the order of $300,000 a year.

“Don’t for a minute imagine that our pill taken once a night will even come close to that,” he said, noting that the United States is home to 23,000 known Angelman patients — and possibly closer to 40,000. “We will get well rewarded for our investment, but we will not exploit patients under any circumstances.”