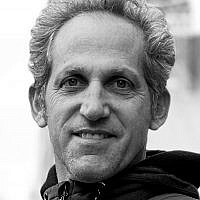 The Blogs
Daniel Hoffman
Apply for a Blog
Advertisement
Please note that the posts on The Blogs are contributed by third parties. The opinions, facts and any media content in them are presented solely by the authors, and neither The Times of Israel nor its partners assume any responsibility for them. Please contact us in case of abuse. In case of abuse,
Report this post. 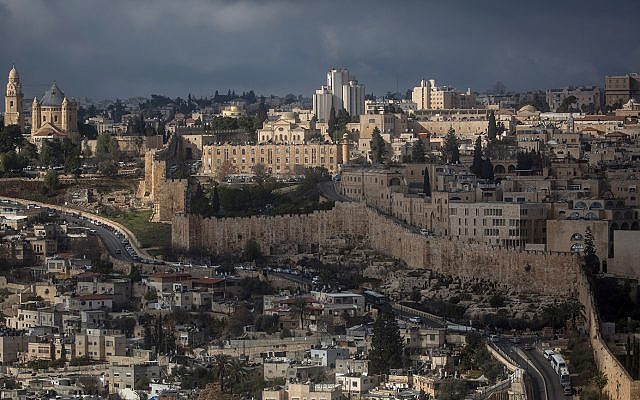 Jerusalem from the Southeast. photo by D. Hoffman

Performing in a big hall, under great conditions, with a professional sound team is what most musicians live for. However there are other situations, perhaps less prestigious, that involve deeply human, unexpected, and even surreal experiences that are rarely encountered in the highly controlled concert setting.

We usually call this a gig.

This time it’s a 3-day international police management training conference in Jerusalem. Cops and security agencies from 30 countries, including the CIA are in attendance at the upscale Mt. Zion hotel overlooking the old city of Jerusalem, Mt. Zion, and the Palestinian village of Silwan. The bandleader is Yoel Ben-Simhon, a Moroccan-Israeli guitarist/oudist/singer, Noa Vax on percussion, and myself on violin. We’re the entertainment for the evening after their first day together in Jerusalem.

Even before we’ve started soundcheck, the besuited and anxious event planner asks us to please only play background music. They’ve had a long, hard day of touring Jerusalem he says. Not too loud, he urges, eyeing the loudspeakers suspiciously. There are several of these people with name tags darting around the room in a lather, which is a sign that it’s going to be a long evening.

A few guests start to trickle in to the beautiful Ottoman-era space with a view of the old city walls. We get a panicked nod from one of the suits and start with a generic Middle-Eastern tune. Cell phones are produced by the arriving guests to record the moment, and they eventually settle into their tables. We’re immediately told to turn the volume down, then a few minutes later to turn it down yet again. Eventually we’re asked to stop playing entirely.

An officer from the Jerusalem police, the only one in the room in a uniform, puts his motorcycle helmet down and welcomes everyone from the podium in dry, nearly-passable English. After a short prepared speech, he screens a slick video with James Bond music describing the insane police situation in Jerusalem, highlighting the recent rash of knife attacks. It’s the kind of video edited in the style of the worst sort of reality TV with the intent to make a difficult situation seem explosive, and it’s verging on propaganda. The tension builds with blurry clips of stabbings and shootings, quick edits of crowded streets and fanatical, shouting religious figures. Jews, Christians and Muslims, religious and secular, Israeli and Palestinian, and masses of tourists all blend together into a volatile mix. The message: we face the most intense security situation in the world, and we’re badasses who know what we’re doing. You’re lucky to be here and your agency’s money is well spent. At the end of his presentation, he tells everyone how glad he is that they came and that he hoped he didn’t ruin their dinner. He’s festooned with all kinds of metal gadgets and not one, but two pistols, one of which is strapped to his leg along with what looks like a knife. He shuffles down from the podium and smiles with difficulty.

We start playing again as the guests tuck into their dinners. Seated directly in front of the small stage are 3 cops from Morocco under the wing of their Foreign Ministry translator. When Yoel finds out, he discreetly turns up the volume and belts out a traditional Moroccan song accompanied by his large Arabic oud. The Moroccans almost immediately burst into a kind of ecstasy- their faces aglow and eyes glistening upon hearing Israelis playing their traditional music so far from home. Yoel exchanges a few words with them in Moroccan Arabic, and they jump up from their chairs, dancing and hugging each other -and us. The one kvelling the hardest was even convinced to grab the mic at the urging of the videographer. He sings badly, but his joy and high spirits spread out into the room nonetheless. The event planner shoots us a worried glance.

Meanwhile, off to our right side there’s a table of ten huge, round, and uniformly blonde Russian cops with buzzcut hairdos keeping entirely to themselves. They stand up around their circular table, put an elbow on their neighbor’s shoulder, give 3 unbelievably loud whoops, and shout something even louder in Russian before downing a generous glass of vodka. Just one of these would certainly knock me out flat. This punctuates the evening, echoing across the hall every fifteen minutes or so like some sort of running joke that gets more hysterical with repetition. Their booming deep voices overpower our sound system, and their bright red faces and prominent necks gleam in the tasteful track lighting.

Whatever tension these people were holding all day on the bus, touring what most of them considered a war zone, came spilling out in a big rush. Soon several are visibly drunk, and a few follow their bodies to the area that had become a dance floor in front of the band. Though unsure how to move to the Middle-Eastern rhythms of Noa’s deft darbuka playing, they manage to wiggle or sway at least part of their bodies. It’s become a full-fledged hafla, and the joy and release fill the room.

Every so often, the high-strung event planner, in between the raucous Russian toasts and struggling to maintain control, shuffles over and tells us to play quieter. Yoel smiles and nods, but continues getting everyone more and more riled up, inspired by the Moroccan cops who never stop smiling, dancing, and singing. The young, impossibly good-looking Arab waiters serving kosher food, avoid any unnecessary eye contact with this unprecedented clutch of law enforcement. However, the head waiter is clearly a much bigger threat in his crisp Italian suit. He barks orders and paces the room with melodramatic seriousness while observing his domain with disapproval. A Fellini movie comes to mind.

In between the songs, the group’s tour guide approaches me smiling and brings me briefly back to reality. He’s a familiar face in this chaos, who I know as one of the fathers from my son’s former preschool in Tel Aviv. Other salaried personages stand in small groups observing in a studied, supervisory role. They gesture knowingly to each other. This is what they planned all along.

It’s not at all what I expected from a room full of cops and spies. To close the evening, Yoel leads everyone in a sing-along of a famous Mizrachi shlagger (warhorse) Shabechi Yerushalayim, which is nearly impossible to sing if you don’t know the tune, or a word of Hebrew for that matter. But nearly everyone stood and joined in where they could, or at least gave the appearance of participating, and gave us a warm, sincere round of applause.

The payment would come two and a half months later.