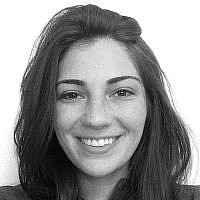 The Blogs
Larisa Shagabayeva
Apply for a Blog
Advertisement
Please note that the posts on The Blogs are contributed by third parties. The opinions, facts and any media content in them are presented solely by the authors, and neither The Times of Israel nor its partners assume any responsibility for them. Please contact us in case of abuse. In case of abuse,
Report this post.

During Passover, we read these words from “Exodus:” “In days to come when your son asks you ‘What does this mean?’ Say to him, ‘With a mighty hand the Lord brought us out of Egypt, out of the land of slavery (13:14).” As a student in yeshivah (Jewish day school), I found these biblical words ancient and not applicable to my own life. After all, I grew up in a secular household in which my parents discouraged, sometimes even mocked, religion. Their decision to send me to yeshivah for 12 years is still perplexing to me. But today, I think of this passage whenever I see my mother radiate with pride as I talk about my studies at Harvard Medical School. I say to myself: “What does this mean . . . to her and to generations of Soviet Jews that came before me? What should this mean to me and what undiscovered sacrifices have delivered me here?”

For most of my life, I struggled to find myself within the mosh pit of cultures to which I thought I belonged. My parents raised me to appreciate my American status, but also not to forget my mother tongue, Russian, or the Caucasus, where I was born. Yet, as a child, I hated being “Russian.” I felt alien and it gave me trouble in my social life. Everything was different about me—the way I spoke, how I dressed, even what I ate. I was mortified by my last name, worrying it was too difficult-sounding to be “American,” as school friends and teachers butchered its pronunciation. I became embarrassed to speak Russian and started to forget the language altogether. I was also the only non-observant student at my orthodox school, as was revealed from the pork and cheese sandwiches my mom packed in my lunch. Because my parents didn’t observe the Sabbath or keep kosher, it was difficult to invite school friends home for fear of judgment. Neither did we belong to the neighborhood synagogue like most of my classmates’ families. We were non-entities in this community, and I felt increasingly isolated. I knew nothing of my background, except that I was different–and I hated it.

In college, I found myself in science but my growing confidence inspired me to comprehend the contradictions of my childhood. I turned to Russian Jewish history for answers, which revealed centuries of anti-Semitism that affected not only my ancestors but also even me. I first learned the term “Refusenik” at a program called RAJE or the Russian-American Jewish Experience that aimed to connect college-aged, post-Soviet Jews, like myself, to their roots. “Refusenik” was applied to any person in the Soviet Union, particularly a Jew, refused permission to emigrate. “Refuseniks” lost their jobs and were banned from most workplaces. I imagined myself a “refusenik” and wondered how different my life could have been in the Soviet Union. That thought impelled me to delve into personal accounts of this history and understand the context of my parents’ sacrifices. What I learned saddened me. My mother graduated top of her class but was denied entry to medical school because of her Jewish ethnicity. My father hid his Jewish identity by fabricating his legal records to read “Tat,” an ethnicity from the Caucasus, instead of “Jew.” Many Jews, like my mother, were constantly reminded of their second-class status with branded passports, and others, like my father, concealed their identities in response to denied opportunities. My parents were also victims of violence in the First Chechen War–another reason to flee the country. Amongst these revelations, the pain of generations of anti-Semitism weighed down on me; I, too, was and still am connected to this history.

Although my parents never explained why they sent me to yeshivah, I see it now as an act of defiance. They re-asserted their identities as Jews in a country that allowed them to do so. While years of Soviet propaganda against religion were hard to undo and were evident in their responses to my Jewish education, a revival of Jewish identity, at least culturally, was promised through my schooling. And still, despite the anti-Semitism they experienced, my parents strived to preserve Soviet culture in our home. Juggling dual identities as a Russian-Jewish immigrant and an American citizen was often difficult, but, with better understanding of my background, I was able to forge a single identity that draws on lessons learned from either experience. To me, this means celebrating religious freedom and respect for diversity in all forms from the perspective of a Russian-Jewish immigrant. It also means honoring adversity and strength in the immigrant story. The tears in my mother’s eyes when I told her of my acceptance to Harvard Medical School spilled over with great meaning; her dream was realized through the achievement of my own dreams—an impossibility if she hadn’t made the sacrifice to leave. All the hardships of immigration, like financial struggles, language and cultural barriers, and the trauma of leaving one’s homeland were endured by my parents to provide me with opportunity. Inspired by their resilience as immigrants, I was honored to realize that what seemed my accomplishment also became my parents’, as well as encouragement for other refugees and immigrants.

Nowadays, when I recall “Exodus,” I imagine how it relates to other immigrants, who, like us, were “brought . . . out of the lands” to find better lives elsewhere. I’m grateful to live in a country like America that is predicated on the idea of freedom and to practice medicine in an environment that implements such principles. When I think of my future as a physician, I’m inspired to help others navigate an unfamiliar health care system in their transition to a new country. As my identity evolves, I continue to reflect on “what . . . this means” to me and to my future immigrant patients, with overwhelming appreciation for our journey and its inspiring narrative.

About the Author
Born in Russia, raised in NYC and now living in Boston -- I'm a second year medical student at Harvard Medical School and have a strong passion for medicine, culture, history and learning people's stories!
Related Topics
Related Posts
Comments