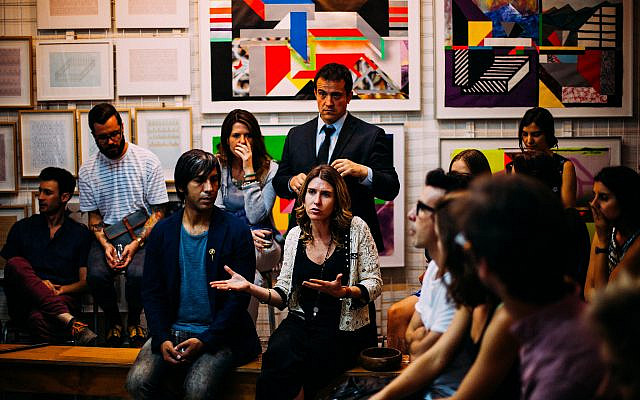 Photo by Antenna on Unsplash

Why in times of great turmoil more public participation is needed

Last week’s return to Israel from Turkey of the couple held for taking a selfie with President Erdogan’s palace highlighted an important trend that may determine which countries succeed, and which fail, during the era of climate chaos: the contraction of democracy.

Turkey, a once proud democracy and European Union aspirant, pulled from the autocrat’s handbook to turn a tempest in a teapot into a rally-around-the-flag operation. Israel, on the other hand, a country renewed in its democratic spirit, returned to normalcy in its response to such saber rattling, as Maariv’s Ben Caspit wrote. All in a week when the 2021 Global State of Democracy report declared the US is backsliding in its commitment to democracy, alongside nations such as Myanmar and Afghanistan.

Even as Israel may have avoided its own Erdogan’s attempts to capture lifelong power, our public sector is notoriously difficult to interact with, to work alongside, and to communicate with. This is a threat to our democracy we need to address. In an era when our very assumptions for business as usual are challenged by a collapsing climate, the backsliding of democracy is especially dangerous. When the times are a’changing, the more diversity in voices that can contribute to the conversation, that can raise issues and suggest solutions, the better. We need to build a new model for public-government interaction that benefits from our public’s diversity of expertise and enables the contribution of that expertise in between elections, to enable fluid course corrections during the chaotic period caused by rapid climate changes in the years ahead.

We need to build a new model for public-government interaction that benefits from our public’s diversity of expertise and enables the contribution of that expertise in between elections, to enable fluid course corrections during the chaotic period caused by rapid climate changes in the years ahead

Autocracies, when well run, are generally very successful at organizing national resources and directing them towards long-term strategic plans. China here is the case in point. On the other hand, they are generally bad at responding to rapidly changing circumstances. The reason autocracies generally fail as the world shifts is because the same discipline and penchant for following orders overwhelms their mechanisms of control. The diet of fear required to keep a public under authoritarian rule limits the information that rises to decision making levels.

Democracies, on the other hand, have difficulty planning for the long term due to dynamic coalitions and transitions in government, but are relatively more nimble in responding to a changed world. Israel here has been a great case in point. Democracies have traditionally addressed long-term planning challenges by entrusting such plans to near-autonomous, hierarchical bodies within the State: generally, the military or independent military-like bureaucracies. Citizens only really contribute to those bodies through their representation during elections, once every few years under normal circumstances.

This model of democracy-bureaucracy has tended to work when humanity’s greatest threats have come from other human beings. Yes, Israel continues to face significant, acute, and immediate security concerns. Yet intelligence analysts worldwide agree that the greatest threats in the coming decades will come from the instability and degradation of our environments. To unlock the potential of the public through democratic participation we will need as many voices as possible, as many ideas as possible, and as much buy-in as possible.

Under the current model, if a citizen really wants to affect public change, they need to run for office or join the public service. But it is well known that running for office has always been — and remains — astonishingly difficult for people not already “in the club.” I’ve experienced this personally, seeing some of my close friends seek to contribute their expertise, their energies, to addressing public challenges, only to be ignored or rebuffed: close friends who are world class economists ignored by the regulatory authorities only to have their ideas rediscovered a decade later when their students join the bureaucracies; mentors expert at clean energy generation receive form replies from energy ministry officials that are no more than a polite buzz off only to now find, a decade later, that our public investment in clean energy should have started two decades ago.

We need to make it easy for the experts among us to give what they can and know that their expertise has been heard. Many professionals among us would like to continue their service outside the government even as they would like to lend their support to public bodies in their area of expertise. While political leaders and public servants lament about the disinterest of the ‘hi-tech generation’ in public service, we haven’t created 21st century frameworks for public contribution. We’ve gotten very good at asking those people to take a month off every year for reserve duty, but do not enable them to give the hour a week or week a year to help the public benefit from their hard-won expertise.

While political leaders and public servants lament about the disinterest of the ‘hi-tech generation’ in public service, we haven’t created 21st century frameworks for public contribution

The dissonance between a consumer culture where every tweet to a corporate brand gets a direct reply and a public culture when even large scale protests are ignored has led talented individuals seeking to contribute to our shared destiny to feel disconnected and disenchanted with our public sector. It leads to a culture of protests in the streets that accomplish little; full of sound and fury, signifying nothing.

It is not hard to understand why many of our best and brightest come to believe in the need to privatize the public service or abolish it altogether, since they’ve experienced private companies as more customer-oriented and responsive. And yet decades of evidence have proven that, while privatization may initially lower prices and improve customer service, the incentives of profit seeking dominate, and privatized infrastructure in the long term grows brittle and corrupt.

The answer to poor public service and a growing disconnect between the public and its institutions is not less government, but more properly structured and moderated communication. To ensure Israel is prepared to successfully fight the effects of climate collapse we need to further open up Israeli democracy and create myriad, multiplexed, transparent opportunities for government-public-private interactions.

The answer to poor public service and a growing disconnect between the public and its institutions is not less government, but more properly structured and moderated communication

There are a multitude of conventional tools and strategies for public participation that are being ignored or severely underutilized in Israel: town halls, open forum conversations, public debates. Likewise, there are tools that can be adapted from adjacent fields to encourage more voices to speak out. Urban planning, for instance, offers the charrette model for presenting planning alternatives and receiving feedback from stakeholders. There is no reason this concept couldn’t be expanded to other kinds of planning efforts, especially those so critical to our response to climate collapse.

But why stop at such traditional methods? We are living through a moment of extraordinary experimentation in democratic participation. We have the opportunity, thanks to today’s technologies and emerging online participation systems, to expand our democracy in ways that were impossible just a few years ago.

In Taiwan, citizens have an unprecedented ability to regularly interact with their representatives and public servants. Across civil society, Web3 tools have enabled Distributed Accountability Organizations (DAOs) to organized diverse populations to do everything from capture carbon to attempt to purchase and make public a private copy of the US constitution. The private sector has perfected customer feedback – in many ways thanks to Israeli technologies – and private companies have built businesses worth trillions by enabling and encouraging the participation of every individual through their platform.

In today’s day and technological age there is no reason a member of the public should feel disconnected from their public service. There is no reason any citizen should feel that their voice is not heard. Encouraging public participation in everyday democracy needs to be a strategic goal of our public representatives. We need to do so not only to defend ourselves against backsliding from democracy, but because without all hands on deck we will fail to respond quickly and resolutely to the challenges to come.

To prepare itself for the fight against climate change, Israel needs to tear down the walls between the public bureaucracy and the public and rebuild our public services as a network of networks where each of us has the ability to contribute to our common future, even and especially if we are not already in the club.