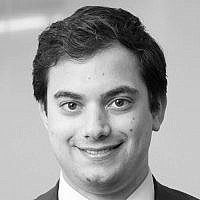 The Blogs
Zack Silverberg
Apply for a Blog
Please note that the posts on The Blogs are contributed by third parties. The opinions, facts and any media content in them are presented solely by the authors, and neither The Times of Israel nor its partners assume any responsibility for them. Please contact us in case of abuse. In case of abuse,
Report this post.

They were expelled in 1948 from their Arabic-speaking homes, forcefully separated from family members. Generations of heritage, established businesses, homes and orchards ploughed over, with history decimated.

They did not ask to be dispossessed. Their plight, a result of political dynamics abroad, external to their lives: the forces fighting the Arab Israeli War of Independence in Palestine.  The fighting there would change their lives forever.

They became refugees, and fled over great distances, not knowing if they’d ever see their ancestral homes again.

It is an often-overlooked fact that Jews have deep historic cultural roots in the Middle East and North Africa (MENA) region with a continuous presence outside of the modern-day State of Israel of over 2,800 years.

While their coreligionists in Europe experienced expulsions throughout history, MENA Jews largely lived as neighbours and loyal countrymen to their MENA cousins. They contributed greatly to the local economy, culture, and intelligentsia and in many cases adopted Arab and indigenous North African traditions as their own.

For instance, In Iraq, in 1948, the year preceding the expulsion of the ancient Jewish community of Iraq, Saleh Al-Kuwaiti, a renowned Jewish musician from Kuwait, composed the soundtrack for the first Iraqi movie – Alya and Essam – which featured a famed Egyptian-Jewish actress Salima Murad.

A common expression uttered prior to the Jews’ expulsions from the Arab world is that there can be no Muslim weddings on Yom Kippur because Jewish musicians were core members of society and were unavailable during the Jewish holidays.

Following the Declaration of Independence of the State of Israel and subsequent Arab-Israeli War of 1948, Arab Nationalist sentiment rose in the MENA states, often coupled alongside antisemitism, so once flourishing and contributive Jewish communities became pariahs across the MENA states. Despite centuries of dynamic coexistence, in the twenty-years following 1948, 850,000 Jews fled their homes in the MENA states leaving behind much of their property, livelihood, and societies.

Today, out of a population that 72-years-ago numbered 913,000, there are just 15,400 Jews remaining in the MENA states, the vast majority of whom live in Iran.

November 30th has been designated by State of Israel as the Memorial Day to mark the departure and expulsion of the MENA Jews. The date is historically significant as it immediately follows November 29th, the date on which the United Nations voted in 1947 to partition the British Mandate of Palestine into two states, a Jewish State and an Arab State. While the Jews accepted the partition, the Arabs refused to do so, instead launching the highly destructive 1948 Arab-Israeli War.

While we are regularly reminded of the Palestinian crisis that precipitated from the founding of the State of Israel, it is imperative that we recall the Jewish lives and communities uprooted at the same time. Many thousands of Jews and Arabs were forced from their homes in the decades following 1948 and left behind legacies, and livelihoods that had taken millennia to establish. It is important to remember Jewish contributions to those MENA states and the lost opportunities that their expulsion created.

Let us all understand and remember the history of the MENA region and Jews’ historic place and contributions to the region’s rich history, while commemorating its communal dissolution.

Despite decades of discrimination there is new hope for renewal. The recent Abrahamic Accords have sparked hope for reconciliation between the Arab world and its Jews, many of whom now living in Israel. I hope that this new era of understanding and rapprochement will once again allow the open exchange of culture, traditions and ideas traditionally held by Jews and non-Jews alike across the Middle East and North Africa.

The first time in centuries a new Jewish community (has been) established in the heart of the Arab World is nothing short of historic.

– Chief Rabbi Yehuda Sarna of the Jewish Community of the UAE

The MENA regional powers beginning to revisit their openness to historical Jewish communities, as Rabbi Yehuda Sarna said, is worth celebrating while still remembering the past.

The November 30th, Memorial Day to mark the departure and expulsion of the MENA Jews is an opportunity to learn about and remember the past with kindling hope for a better future of peace and prosperity across the MENA region.

About the Author
Zack is a civil litigation lawyer in Toronto, Canada. He is an active member of Toronto's Jewish community and is involved with numerous volunteer organizations.
Related Topics
Related Posts
Comments