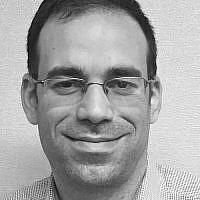 The Blogs
Mitchell Rocklin
Apply for a Blog
Advertisement
Please note that the posts on The Blogs are contributed by third parties. The opinions, facts and any media content in them are presented solely by the authors, and neither The Times of Israel nor its partners assume any responsibility for them. Please contact us in case of abuse. In case of abuse,
Report this post.

Having been on both sides of the synagogue pulpit, as well as a member of local and national rabbinical boards, I thought I might shed light on why the Rabbinical Council of Bergen County recently codified and enforced a rule clarifying that it will accept only men in the clergy, without leaving further room for debate. This is a rare phenomenon in American Orthodoxy, and it’s worth considering, particularly in light of complaints making their rounds from Teaneck congregants and bloggers.

To understand this decision, some background is in order. After the Reform and Conservative movements began to ordain women as rabbis, the male composition of Orthodoxy’s clergy became an additional dividing line between the Jewish denominations. When Rabbi Avi Weiss’s Yeshivat Maharat adopted this practice, the Rabbinical Council of America unanimously resolved in a member resolution that it would not accept women rabbis, “regardless of title.” When Yeshivat Maharat and its supporters ignored this and a subsequent 2013 resolution, in 2015 the RCA formally banned its members from ordaining or hiring women as clergy or religious teachers in Orthodox institutions, specifically mentioning Yeshivat Maharat so there could be no mistake. The Orthodox Union followed suit more recently.

There are a number of reasons for the Orthodox opposition to clerical egalitarianism. They are too complex for a short op-ed, and they have been rehashed in print for years. They include biblical, halachic, sociological, communal, and practical considerations, all of which have been thoroughly debated. What is important to understand now is why Orthodox Judaism, which normally is characterized by a robust debate (as the joke goes, when there are two Jews, there are three opinions), is pressing for uniformity on this issue.

The first point to address is how Jewish communal decisions are made. At the local level, every rabbi, and ultimately the congregants who abide by their rulings, decide most issues. But there also are greater rabbis who have appellate-like force, as well as customs spanning across the Jewish nation that sometimes establish settled law. Historically, these authorities and practices were important when it came to the integrity of Jewish tradition. In the land of Israel and in Babylonia, where large Jewish communities lived, some degree of uniformity was important so Jews could live together. Uniformity was less important in the broader diaspora, where many relatively isolated communities created their own customs. (Although it should be noted that many communities still pursued uniformity on important matters, either by appealing to recognized rabbis like the Gaonim of the Middle East, or by following codes of law like that of Maimonides.)

Greater uniformity made a comeback with the development of American and Israeli Orthodoxy. While Orthodox Jews have embraced the diversity of customs created in the diaspora, the need to maintain common basic standards has led to a lot of streamlining. In America, these include the spread of the Young Israel movement’s uniform prayer style, as well as the acceptance of a common start time for Shabbat (despite old debates about precisely when it begins). In Israel, the streamlining includes Rabbi Ovadia Yosef’s forging of a Sephardic identity from different eastern Jewish customs, as well as the establishment of communal kashrut standards.

Uniformity is particularly important for prayer and kashrut, since it is extraordinarily difficult for Orthodox people to live together without being able to pray and eat together.

Indeed, prayer and kashrut standards were the focus of American Orthodox associations for decades. For instance, swordfish became uniformly unacceptable in Orthodox circles, even though there was room to argue that it was kosher. In the synagogue, mechitzah partitions became a requirement, even though the Jewish legal literature is sparse when it comes to this issue. If you cannot eat and pray together, it’s hard to maintain a denomination. This uniformity is just as important as a common Jewish calendar, which was repeatedly the subject of debate but always had to be resolved with one common decision, even as late as the 10th century.

Today, when the RCBC enforces the RCA’s and OU’s standards concerning women rabbis, it is simply ensuring that American Orthodox Jews can pray together, just as it supervises restaurants in our community so that we can eat together. Not everyone is happy with the standards, but this does not lessen their necessity.

This raises the question of why some Orthodox Jews seem trapped, unable to accept communal standards in good conscience, yet unwilling to move into one of the more liberal denominations. It may be that they feel comfortable with most Orthodox practices, and because Orthodoxy has been the most successful of the denominations, as the recent Pew Report’s demographic numbers highlighted.

The problem is that it may be impossible to separate Orthodoxy’s success from its opposition to the very egalitarian trends that supporters of women rabbis wish to embrace. Across the United States, egalitarian trends have had a deleterious effect on religious communities in general, and Judaism is no exception. The reasons why are unclear. Perhaps by disincentivizing men from seeing public worship as primarily their responsibility, it has been the cause of a dramatic drop in non-Orthodox synagogue attendance.

Regardless of the precise causes, however, the general picture we have is that egalitarianism does not seem to be “good for the Jews.” That does not mean that there is no place for it. The liberal denominations and non-denominational Jewish organizations have embraced it, and they offer many opportunities for Orthodox Jews looking to make a difference in the broader Jewish community. But it also is understandable that some find wisdom in Orthodoxy’s refusal to adopt egalitarianism. And the existence of a growing and vibrant Orthodoxy is not something we should tamper with lightly if we are concerned with Jewish continuity.

Ultimately, this all will sort itself out. If Orthodox people want female rabbis, they will have them. There is plenty of non-Orthodox Jewish money that continues to flow into the epicenter of open Orthodoxy at its Riverdale campus, enabling it to provide substantial fellowships to educate open Orthodox men and women for the clergy. What the RCBC and umbrella Orthodox organizations like the OU and RCA are doing, along with Agudath Israel, the Rabbinical Alliance of America and the National Council of Young Israel, is saying that just as the mechitzah synagogue partition served as a dividing line between the Orthodox and liberal denominations, so too the composition of clergy is a dividing line today. If demographics are any indication, the minority of Orthodox Jews who disagree with the RCA, OU, and RCBC will agree to accept their communal standards, or join the liberal denominations, or become non-denominational, or establish their own small denomination. As Jeremiah told the Jews of Egypt during Israel’s debate over how to handle the exile, only time will tell.