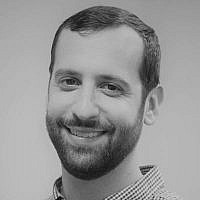 The Blogs
Avi D. Gordon
Apply for a Blog
Advertisement
Please note that the posts on The Blogs are contributed by third parties. The opinions, facts and any media content in them are presented solely by the authors, and neither The Times of Israel nor its partners assume any responsibility for them. Please contact us in case of abuse. In case of abuse,
Report this post. 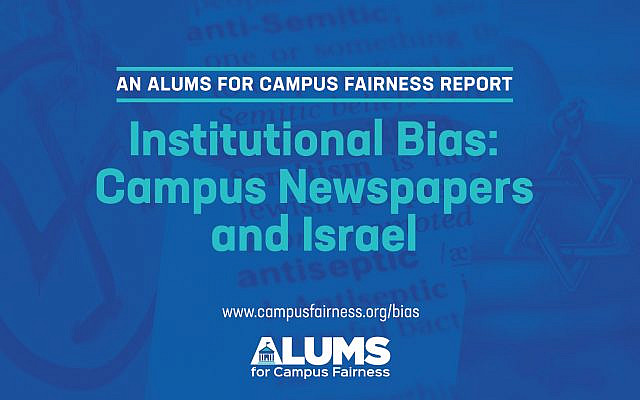 Israel is a lightning rod for criticism at America’s colleges and universities. Campus newspapers are part of the problem. Those of us who work in the organized Jewish community have suspected this for quite some time, but until now no serious attempt has ever been made to study and quantify it. Alums for Campus Fairness, the organization I have the honor of leading as Executive Director, did just that, commissioning a comprehensive study to analyze the previous 5 years of data from a representative sample of 75 schools, ranging from large public universities to small liberal arts colleges and private institutions. The main campus newspapers at these schools published 1,958 articles on Israel, the Palestinians, Jews and Judaism, and related topics. The results were clear and convincing: campus newspapers are institutionally biased.

Numbers don’t lie. With over 1,500 stories fixated on Israel, college newspapers are obsessed. This stands in stark contrast to their relative silence on antisemitism and discrimination on their own campuses. As antisemitic sentiment and incidents rise, news articles mentioned it only 606 times in 5 years. Even when they did cover antisemitism, some college publications neglected to define it as a prejudice against the Jews. At Syracuse University, Jewish students were targeted with hateful antisemitic graffiti on campus multiple times throughout 2019 and 2020. The Daily Orange reported on the swastikas, including one found at a synagogue, yet failed to mention Jews or Judaism at all. The same newspaper published 10 articles about Israel and the Palestinians. In this case, and many others like it, college newspaper reporters and editors prioritized coverage of a small country thousands of miles away over the safety of their Jewish peers.

Even more alarming than the quantity is the quality. Among news articles that exhibited bias, over 92% were anti-Israel, while just 7% portrayed the Jewish State in a positive light. Over the entire review period from spring 2017 through fall 2022, newspapers at these 75 colleges and universities only published 14 news reports that favored Israel.

While these trends generally held steady across the country, there were some notable regional disparities as well as distinctions between large public universities, small liberal arts colleges, and other private schools. New England was home to the most biased campus newspapers, with 69% of slanted news articles, editorials, and Op-Eds exhibiting a negative bias towards Israel or Jews. While newspapers at large public universities produced the most content about Israel, the Israeli-Palestinian conflict, and related matters, none of them were among the most biased. The top five campus papers sorted by negative bias were all small liberal arts colleges. In the most extreme example, every single mention of “Israel”, “Palestinians”, “Zionism”, “Jews”, or “Antisemitism” by Haverford College’s newspaper over the past 5 years exhibited negative bias towards Israel or Jews.

Though the report’s conclusions are alarming and at times difficult to read, this is not a lost cause. Jewish and pro-Israel students and alumni can and must make our voices heard. Through this research, Alums for Campus Fairness found that Op-Eds are still a very effective way for students and alumni to share their perspectives. The margin of negative and positive Op-Eds related to Israel and antisemitism was relatively close compared to editorials and news articles. We should build relationships with student journalists and encourage Jewish and pro-Israel students to get involved with their campus newspapers to become reporters and editors themselves. Jewish and pro-Israel students and alumni have the ability to rewrite the narrative by engaging more, not less. By leaning in and not accepting the status quo as a foregone conclusion, we can take a big step towards fairness in campus journalism. Alums for Campus Fairness encourages our alumni to pen Op-Eds at their alma maters so the alumni voice can be heard loud and clear: antisemitism has no place on campus.

About the Author
Avi D. Gordon is the Executive Director of Alums for Campus Fairness-the national alumni network that counters antisemitism and anti-Israel rhetoric on campus. Avi has over a decade of experience in the Pro Israel campus community having previously held Director positions at StandWithUs as the East Coast Campus Director and the Emerson Fellowship Director, at AEPi-the international Jewish Fraternity-as the Director of Israel Engagement, and most recently as AJC NY's Associate Director. Avi graduated from Binghamton University in 2010, majoring in Judaic Studies and minoring in International Studies. He received his Master's in Israel Education from George Washington University through the iCenter. Originally from Harrisburg, PA, Avi resides in South Florida with his family.
Related Topics
Related Posts