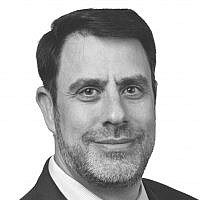 The Blogs
Peter Berg
Apply for a Blog
Please note that the posts on The Blogs are contributed by third parties. The opinions, facts and any media content in them are presented solely by the authors, and neither The Times of Israel nor its partners assume any responsibility for them. Please contact us in case of abuse. In case of abuse,
Report this post.

With this one-word question posed by God to Adam, one of humanity’s fundamental missions is revealed: Where are you when you are needed? This powerful question not only lays the philosophical and religious groundwork for a lifetime of positive change and action but also implicitly recognizes that every single person has a role to play.

Our Sages note that Rosh Hashanah isn’t actually the anniversary of the first day of creation. Rather Rosh Hashanah, the Jewish New Year, commemorates the sixth day of creation. The day that Adam and Eve—humanity— were created. The day that the existential question of “Ayeka” was introduced into the world as a part of humankind’s ever-important introspection. It is the creation of humanity and this subsequent question that underpins our relation to each other, to the world, and to God, as recalled each and every year in our celebration of Rosh Hashanah.

This year there is perhaps a heightened level of “Ayeka.” The COVID pandemic has both forced and allowed for a deeply communal and organizational introspection. What is our mission and purpose as a Jewish community? What do we owe ourselves, our community, and our future as a people in this time? This question is pressing but also self-affirming as it acknowledges that change that all of us have the power to inspire.

One fundamental tenet of the Jewish community and tradition is that it is always forward-looking. In a cherished Talmudic story, a man named Honi finds himself walking through a field and happens upon a person planting a carob tree. Knowing that carob trees are infamous for the time they take to grow, Honi asks the planter if he believes that he will live for another 70 years in order to reap the benefits of his work. “Perhaps not,” says the man, “but when I was young, I remember that there were plenty of carob trees that past generations planted, and now I am planting for the next!”

The Jewish community is constantly producing carobs. We are at the forefront of social justice issues, we ensure that timeless Jewish values are taught and fostered, we are constantly involved in projects that reflect the pluralism and diversity of the wider community, we cultivate individual relationships that come together to create a warm, welcoming, and beautiful community. It is now crucial that we focus our attention on ensuring that there will not only be “carobs,” but full trees for the next generation.

Philanthropically supporting the Jewish community is something that came naturally to previous generations of Jews. Medieval Jewish wills speak passionately about the importance and need for the Jewish community. My parents and grandparents and their peers deeply understood the importance of laying the groundwork that we all enjoy and value today. Signing the Jewish Future Pledge is our way of saying that we want to continue their legacy. The legacy of continuing this age-old Jewish tradition of looking towards the future.

This year, as we find ourselves in a unique and unprecedented time, “Ayekah” is the question we need to be asking ourselves. As we take note of what in our society and community we find valuable and meaningful—especially as we have seen the importance of these organizations in times of crisis—we must do all we can to ensure its preservation.

About the Author
Peter Berg is the Senior Rabbi of The Temple: The Hebrew Benevolent Congregation. The Temple is Atlanta’s oldest and largest synagogue, founded in 1867. Rabbi Berg serves on many communal boards including, but not limited to: The Anti-Defamation League, Outcry: Faith Voices Against Gun Violence, Faith in Public life, The Georgia Early Education Alliance for Ready Students, The Georgia Holocaust Commission, Hebrew Union College-Jewish Institute of Religion, the URJ/CCAR Commission on Social Action of Reform Judaism, and The Atlanta Community Foundation. He is immediate Past President of the Atlanta Rabbinical Association. Rabbi Berg was named by Newsweek and The Daily Beast as one of the most influential rabbis in United States, by Georgia Trend as one of the 100 most influential Georgians, and by Atlanta Magazine as one of Atlanta’s most powerful leaders.
Related Topics
Related Posts
Comments