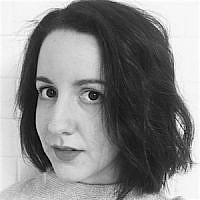 The Blogs
Alana Dakin
Apply for a Blog
Please note that the posts on The Blogs are contributed by third parties. The opinions, facts and any media content in them are presented solely by the authors, and neither The Times of Israel nor its partners assume any responsibility for them. Please contact us in case of abuse. In case of abuse,
Report this post.

The region of Appalachian Ohio where I was raised is a place almost entirely devoid of lived Jewish experience. When I did encounter Judaism, it looked like this: an Auschwitz survivor in long sleeves speaking at the local library on Holocaust Memorial Day; the yellow star that my sister wore in a community production of “The Diary of Anne Frank”; my mother’s hand shooting over my eyes like a quickly-drawn shade when Nazi soldiers pushed a wheelchair-bound man through a window in “The Pianist.”

If you grew up, as I did, in a nominally Christian family in a flyover state, there was a high probability that your only exposure to Jewishness was through stories of the Holocaust and the long shadow it casts over the Jewish people.

My college years broke open the world of Judaism beyond the history books, thanks to close friends who welcomed me to their Passover seders and Friday night services, and professors who led me to Michael Chabon, David Grossman, and Yehuda Amichai. Still, I struggled to envision a Jewish identity that wasn’t ultimately rooted in and defined by what had happened “over there.”

This tension felt most profound when I learned that a friend of mine, another non-Jew who frequented Hillel social events, was considering Jewish conversion. It was easy for me to understand that someone could find comfort and belonging in the Jewish community, as I had in recent years. But in my mind, to be Jewish meant to be tethered to the Holocaust, never too far away from that horrible place that took so much but also inspires resilience. I didn’t see how a non-Jewish person could authentically weave themselves into that narrative, and without it, how could you claim true ownership over Jewish identity?

I abandoned the question until I moved to Israel after college to study politics in Jerusalem and pursue a budding relationship with an Israeli man. I was living in a country that regularly uses the Holocaust as one of the main defenses for its continued existence, and walked among the world’s largest community of survivors. And yet, I had never experienced a Jewish way of being that felt more liberated from the Holocaust than I did in Israel.

Israel was the first place that I felt comfortable thinking about Jewish conversion because I was given permission, even encouraged, to construct my Jewish identity free from the ball and chain of the Holocaust. Rejection of the Diaspora and all of its dark, sticky nuances was one of Israel’s foundational principles, and I was swept off my feet by a new way of Jewish life that felt whole, fresh, and unburdened. Galut and its horrors have no place here, I thought, and they didn’t need to be a part of my Judaism, either.

Ironically, to actually become Jewish I ultimately chose to leave Israel for New York so I could pursue conversion free from the restrictions of the Orthodox Rabbinute. In New York, Judaism felt like nostalgia: the Lower East Side, Katz’s Deli, Yiddish theater, and Brooklyn. It was also remembrance: young Jews stomping their feet and raising handmade signs that read “Never again!” and “My people were refugees, too” at rallies in Battery Park and Times Square.

But underneath this swirl of nostalgia and memory, I also found the freedom to explore Jewish pathways that did not exist for me in Israel. I learned how to lead ma’ariv with the community that invited me to the bima for my first aliyah, danced in a yurt to welcome the Sabbath Queen at a Jewish retreat in the woods, and recited kaddish in front of a West Village police station to mourn the loss of Black lives. None of these experiences felt burdened by the history of Jewish oppression, and in many ways my Jewish life was more vibrant and new than anything I had had the chance to create in Israel.

The anniversary of my Jewish conversion falls during the month of Nisan, typically a few days before Yom HaShoah. This year, as the emails about Holocaust memorial events and Israeli Independence Day parties began to flood my inbox, I was reminded of a trip that I took to Tel Aviv with my friends on Yom HaZikaron a few years ago.

We had arrived in the city just before 10 AM, when the air raid siren was scheduled to sound for the two-minute moment of silence in remembrance of Israel’s fallen soldiers. We found a nearby overpass and watched silently as the cars below us stopped one by one, emptying their drivers and passengers onto the highway. An outsider might have observed the scene and thought that he was witnessing a moment of final surrender: an entire country standing tall in the face of oncoming slaughter from the skies, their feet rooted to the land as they accepted their fate.

Later that night, the pulse of the music from a trail of Rebbe Nachman vans shook my rib cage. I sipped arak and took in the spectacle of Yom Ha’atzmaut on Rothschild Street. Standing among the sea of shirtless teenagers, raucous Hasids, and children wrapped in Israeli flags, I knew that I would one day convert to Judaism. It was less of a decision than a recognition that I had traveled too far down this particular road, that I couldn’t find my way back even if I wanted to.

I doubt I thought much that night about the question that once troubled me during my college years. But I can see now that this period of my life, a time when I thought I was the most free from the Holocaust and the Diaspora experience, was when I finally came to make peace with it. The people who survived the horrors of the Shoah built the country that gave me the strength and audacity to call Judaism my own. For this reason it is also my legacy, and a proud one.

About the Author
Alana Dakin (@alanadakin) is a freelance writer and works in nonprofit communications in New York. She holds an M.A. in Israel Studies from the Rothberg International School (Hebrew University).
Related Topics
Related Posts
Comments