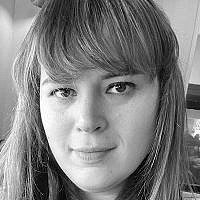 The Blogs
Alexandra Chana Fishman
Apply for a Blog
Advertisement
Please note that the posts on The Blogs are contributed by third parties. The opinions, facts and any media content in them are presented solely by the authors, and neither The Times of Israel nor its partners assume any responsibility for them. Please contact us in case of abuse. In case of abuse,
Report this post.

A disturbing new study from a company called Resume Builder made repeated appearances in my inbox recently. Friends and colleagues alike were  not shocked, but very upset by this new information. “Did you see the new study where 1 out of 4 hiring managers say that they are less likely to move forward with Jewish candidates?” asked my friend Ruthy, a software engineer in Denver. “What are your thoughts on this?” asked my colleague, Kate.

These are numbers I can believe. Unfortunately, it doesn’t seem like a day goes by without an antisemitic incident on the street, on campus, or in the form of vitriolic words from a person of influence.

Even before evaluating Resume Builder’s methodology, I took note of the fact that a free resume building service is aware enough of the disturbing rise in antisemitism to employ its time and resources on this phenomenon. That, in itself, is an indication of the times, a zeitgeist in which there is a growing awareness of bigotry against Jews.

In order to proceed with due diligence, I emailed Resume Builder asking for the full data and methodology. I received a prompt response with all of the details that I requested. While the initiative to create this type of survey at all points to the existence of a real problem with antisemitism, there are faulty aspects to both the methodology and the questionnaire.

The legitimacy of a survey is gauged by a number of important factors. To begin with, it is critical to have trained researchers and data analysts, so that they know how to ask questions in a neutral (as opposed to leading) manner, and analyze results. Other factors include how the sample (group of people chosen for the survey) was secured, and demographics for the population it is looking at. If these criteria are not met, the survey cannot be trusted.

In the study about hiring managers, the survey design itself is perhaps the biggest issue. It was created with the help of a polling company which allows their clients to write their own survey questions (as opposed to seasoned and trained researchers) and run the data analyses (as opposed to individuals proficient and trained in quantitative methods). This is critical, because the survey questions and subsequent analytics are key parts of valid data, as will be explained below.

In terms of methodology, the sample was secured with the help of incentives given to survey participants, including extra perks on dating apps.  As you might deduce, this would appeal most to younger people who are very comfortable with technology, are on their devices, and motivated to receive extra perks in the online dating world.

This form of a sample is what the research world refers to as a “convenience sample.” The company polled whoever might be easy to reach, as opposed to individuals reflective of all hiring managers. To be more accurate, after the results are found, researchers have to find information about the population which they are surveying to make sure that the sample that they have matches national demographics.

Additionally, credible data analysis includes aspects of “checks and balances.” The data goes through various statistical tests to check for errors, such as the results being caused by random chance rather than the reasons claimed by the authors of the study. These tests are of critical importance, without which the data cannot be used. The study on hiring managers did not undergo any of the statistical tests needed to meet this standard.

The survey questions seemed most egregious; in that they were blatantly leading. One question asks, “Which of the following ways did you come to understand the applicant is Jewish?” Human nature is such that if an answer sounds correct, participants in the survey will select it, even if they wouldn’t have thought of it on their own. The answer choices given included options such as “their last name” (presumably could also be German, Eastern European, or indicative of having one Jewish great- grandfather….) “the school they went to”, “their appearance” (?!) “past experiences with a Jewish organization (presumably not everyone that works at a Jewish organization is Jewish). These kinds of responses are leading. Leading questions (or responses) are one of the known potential survey biases that invalidate results. Additionally, when survey answer choices allow for multiple responses, individuals may assume that there are multiple correct answers, and look to give as many as possible that might make sense, even if they hadn’t thought of it on their own.  This leads to entirely skewed statistics.

Another question asks, “Why do you believe your industry should have fewer Jewish employees?” Response choices given were the same as those listed right above. Survey questions like this can inadvertently create more antisemitism.

Given the leading questions, a sample that is not representative of all hiring managers, the lack of oversight from qualified experts, and other factors, conclusions cannot be drawn from this survey.

However, due to the rise in antisemitism, it is quite possible that a significant amount of hiring managers harbor biases towards Jewish candidates. To know for sure, further research would need to be done using trained researchers, credible methodology, and appropriate data analytics.

About the Author
Dr Alexandra Chana Fishman is a Research Manager at StandWithUs, an organization which combats antisemitism and educates about Israel. She is proficient in data and analytics and uses this expertise to create original surveys with data driven results. Her dissertation was a secondary data analysis on discrimination against Evangelical Christians, Muslims and Jews on college campuses. She lectures on topics related to antisemitism and current research, and has presented her research globally, including at Cambridge University.
Related Topics
Related Posts
Alexandra Chana Fishman