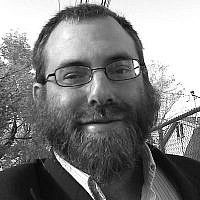 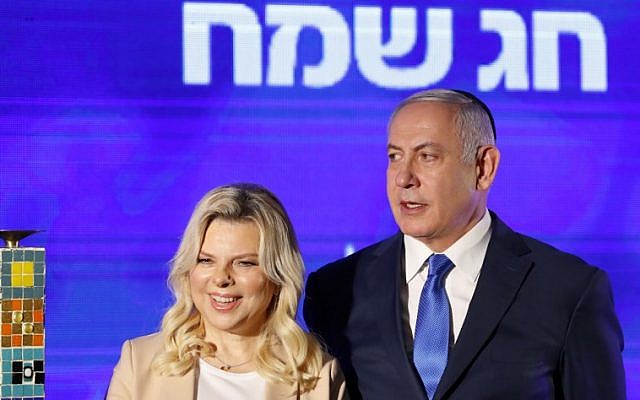 Prime Minister Benjamin Netanyahu stands by his wife Sara before lighting a menorah during the start of Hanukkah in Ramat Gan on December 2, 2018. (GUEZ / AFP)

Walk the streets of any capital city anywhere in the world. Ask one simple question to passersby, “If the prime minister’s (or president’s) wife were to ask their residential chef to prepare some meals for her ailing father in the hospital, what do you think should happen to her?”

Looks of puzzled bewilderment would form the most common response. Those who understand the filthy nature of political animus may understand the question and answer, “I’d gather that this would be okay.” Real sticklers with no concept of the human thought process and no understanding of the legal definition of mens rea (criminal intent), would demand a fine. Only someone with severe, severe, mental illness would suggest criminal charges, hauling the “offender” into court and plunging the whole nation into scandal.

Now let’s ask another question. Were you to find out that Mrs. Ben Gurion, Mrs. Rabin, Mrs. Peres or Mr. Meir, had he survived, had had the “audacity” to bring meals from the house they reside in, albeit an “official residence,” to their ailing father in hospital, would you see this act to be worthy of commencing an avalanche with which to challenge the life of the government? Does doing so promote the best interests of the country?

A rational person would answer the last question with, “no, such brute harshness would drive good, smart and decent people away from public life.” Unfortunately for the Netanyahus, rational people have been hard to come by of late. There were, of course, both the apoplectic trial judge as well as the judge tasked with mediating a solution. Yet those who have stood against Sara Netanyahu have yet to accept any third party solutions.

So unfolds the tragic tale of Sara Netanyahu. But wait, more insanity is yet to come.

A prime minister of a nation updates a series of arcane communications laws. It is, after all, the middle of the 19th century according to my wall clock, and as they say, Jews are always late. He takes advice from and discusses these long overdue overhauls with communications executives – as opposed to, say, pediatricians, professors of introductory calculus, street sweepers or psychic readers on the highway. After long legislative and lobbying battles, the overdue changes are implemented.

The minister and the communications execs work together for years. They have conversations about many things. In one of the many conversations throughout the process, this prime minister, or minister, says something like “I saw this story in your outlet, do you want to know the real facts?” Or, “You know, that piece was unfair. Did you have to go there?” Maybe he said, “If you knew how hard I worked on this or that issue, you would have written something nicer.”

Does this sound to you like something that might happen in the regular course of human interaction or does this constitute a heinous act, one on par with the treachery of a Benedict Arnold? If you’re inclined to choose the former, congratulations, you’re human. If you believe the latter to be correct, congratulations, you may just be a bureaucrat. You’re just a bad one though, because such over the top treatment is dangerous for and corrosive to society.

Over the past three decades, the United States has seen its fair share of politically motivated indictments. One of George H. W. Bush’s last speeches as president, derided the use of indictments to remove people from power and its use as a near assassin’s instrument of political change. “The proper venue” for same, “is the voting booth,” said the outgoing president, “not the courtroom.”

Bibi Netanyahu has served Israel for decades. He has helped countries throughout the world and has built alliances as no one has before. One does not have to support him. There are democratic ways to oppose both him and his policies. These methods are part of a system of order which is part and parcel of modern governance. Then there are rotten ways, ways which no one should use against their worst enemies. For to do so is not just unjust. To do so is to poison the national morale and to drive away anyone of talent from going near anything to do with public service.

We can act decently toward each other and still fight valiantly over the issues. Or left can go after right, right in turn will go after left and an entire nation can devour itself in one great big conclave of cannibalism. The choice is determined by our actions.

The examples outlined at the beginning of this article are real. They describe, to the letter, the ridiculous, scandalous and shameful way that small minded people have gone after the prime minister – and his wife (her, for “shamefully” bringing home cooked food from her residence to her ailing father as he sat in hospital). The way the media would describe it, you’d think that the Netanyahus were Mr. and Mrs. Idi Amin. Only those who’ve sold their own humanity, and who have now taken to the streets demanding the “overthrow of the Netanyahus” (apparently for being King Louis and Marie Antoinette), would revel in the irony of this comparison.

After decades of bureaucratic overreach, the United States began to learn its lesson after a few young prosecutors decided to go down in infamy with the prosecution of former Virginia Governor Bob McDonnell. McDonnell had met with someone who had given him presents, yet he did nothing illegal or untoward. These prosecutors went after his wife as well, for good measure. And then something happened. People realized that the McDonnells had broken no laws. They realized that the overreach which had unfairly upended their lives would also drive away anyone decent, or simply whoever cared about their own self-preservation, from seeking public office.

President Trump, who has so far, thanks to the One Above, escaped the hands of those who commit bureaucratic tyranny (and by definition, bureaucratic terrorism), has championed the recent overhaul of the US criminal justice system, because he recognized that the prison system was ensnaring innocents, was being overused in a way that threatened the good and had become recruitment central for terrorists seeking to gain the allegiance of young men who had had their lives shattered. The only thing it became good for was the making of career criminals out of first-time, young, non-violent offenders. Something had to change.

The use of prison, other than in cases needed to protect society, goes against the Jewish legal tradition that forms the basis for the Magna Carta and really all of European civil and criminal code. America and other countries are going away from the use of prisons for anything and everything, an unfortunate advent of only the past two-to-three decades, but one which has become a deep moral stain on Western society.

Even prosecutors have often stated that “a bad law is one which makes criminal acts which are ordinary.” Public servants can be held to account by the public for each of their positions and public actions. Vigorous analysis and debate can and should ensue. They are not, however, pinatas. Their wives are not personal chess pawns, set up for play by an opposing army of bureaucrats.

Attorney General Avichai Mandelblit is a man with religious faith and has been known to be fair. Criminal justice can only work effectively if tempered with mercy. In this case, however, no mercy is needed. It should be as clear as day that the allegations of impropriety are such that teeter under their own weight. They should be dismissed. Basic fairness and justice demand nothing less.

About the Author
Yomin Postelnik is a writer and lecturer on ethical, societal and religious issues. His writing has been featured in American Thinker, Canada Free Press, the Jewish Press, American Daily Review and other outlets. Postelnik has served as a rabbinical advocate and attained his ordination in 2000. He works closely with community leaders to explain Torah values, fight against misconceptions and slander against religious values.
Related Topics
Related Posts
Comments