Good decisions about policy, corporate or governmental, must be based on accurate data, unless, of course, one wants that policy to reflect a private agenda.

So, there is an old story about a Greek shipping magnate looking to hire a new CFO. After an international search, his staff culls the applicants down to three actuarial-accountants, all with PhDs in math, and the magnate interviews them:

The Israeli replies: “How much would you like it to be?”

Some might smile with pride at this characteristic Israeli audacity, aka chutzpah. Others might look at the story not as charitably. In the past few weeks, however, when I have never seen the term “freier” (sucker) used as frequently, I fear many would vote for the first interpretation.

On the world stage, Netanyahu is claiming we went from the worst per capita case reports to the best as a result of the (rather porous) lockdown and government initiatives. Nice rhetoric – if it’s true. Of course, our entire governmental policy, and these results are predicated on data — especially the data Netanyahu and his ministers feed the populace, whom he must keep satisfied to remain in office. So, one might ask if how much would you like the numbers to be, Mr. Netanyahu? is a valid question.

I have seen reports that Haredim are being treated for COVID-19 in private facilities. This off the grid practice protects their towns and thereby avoids incriminating red designation, thereby inviting individualized town-lockdowns. Of course, these numbers also are not reflected in reported totals of total new COVID-19 cases, artificially lowering the count.  So, – if people are allowed to bypass the system: how much would you like the numbers to be, Mr. Netanyahu?

And the other day, the government failed to report COVID-19 statistics, blaming the omission on computer malfunction attributed to the time change. This, in the land of the Start-up nation? Anyway, nice rhetoric – if you believe it.

And then, government testing of COVID-19 is at a new low compared to months ago. Of course, this is reflected in lower numbers of new COVID-19 cases, artificially lowering the count. But the government says the percentage of positives is much lower, sustaining their contention that the lockdown worked extraordinarily well, (notwithstanding outright violation in some communities, in some cases directed by Haredi leaders). 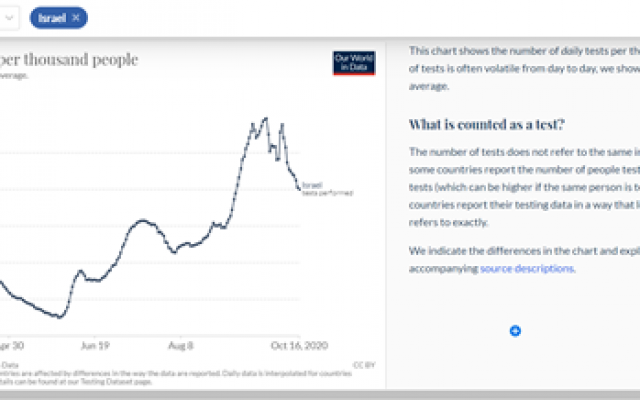 Number of tests per thousand persons in Israel, (courtesy, Ourworlddata.org)

But I have been following Israeli COVID-19 statistics for months now – and notice a consistent discrepancy between numbers reported to the Israeli press by the Ministry of Health (MOH), numbers reported to public reporting sites such as Wikipedia, also submitted by the MOH, and numbers reported to international public health agencies like the European CDC (ECDC) or the World Health Organization (WHO), again supposedly sent by the MOH. Here for your consumption are a few examples:

On October 26, the Israeli press reported that:

“The ministry said 239 cases were recorded Saturday [24th]…  … down from 1,000-1,500 daily cases last week.” By contrast, Wikipedia reported 420 cases for Saturday (24th). The testing numbers are also different. Israeli press reports that just 6,344 tests were conducted Saturday, Wikipedia tells us that only 5184 tests were performed as of the 24th. As of the 27th, those numbers had not been updated.

There is no way to verify these data. As of Oct 23, Israel stopped reporting daily case numbers to the WHO – even prior to the supposed computer glitch. The numbers for those dates only reappeared on Oct. 27th.

From what we can see from information provided just prior to the news blockout, information reported to the WHO is shockingly and staggeringly different from Israeli press reports or Wikipedia’s. For Friday, Oct 23, 1143 cases were recorded by the WHO. Wikipedia’s numbers for that date – are 711 cases.  One day earlier, Oct. 22 Globes reported 895 cases, while the WHO reported 1171cases.

After retroactive data was submitted and reported to the WHO (on Oct. 27), the disparity continued. (Recall that the Israeli press reported 239 cases for Sat. Oct. 24th, and 559 for Sun. the 25th,).

So how many new cases are we generating? Could it be as many as Netanyahu wants it to be?

Some authorities say that the percentage of positive tests is more representative of the true picture than the case count, although one has to wonder why the testing numbers have decreased from a high of over 67,000 tests per day before the lockdown was instituted to less than 6,000 tests per day post lockdown.

Interestingly, an interim report [from the Comptroller’s office], stated that the Health Ministry bought 2.4 million kits for testing citizens to see if they had the virus and recovered, at a cost of NIS 112 million, but has no clear plan for how they will be deployed and has only used 60,000 of them.” It appears someone ordered those tests to be put on ice, at least for now.

Obviously, manipulation of data cannot be the reason. Or can it?

For now, the latest Israeli press reports that 3.9 percent are returning positive, significantly higher than positivity rates of 2.7-2.9% seen late last week, although far less than the 10+% positives reported at the height of the epidemic. But here, too, there are discrepancies. A revised report dated Oct. 22 from I24 news reported that Israel registered 1165 virus cases in 24 hours.

So how many tests are positive? Is it possible the answer is: as many as Netanyahu wants it to be? That can’t be, you say. How can you skew the test results? I said the same thing – until something interesting transpired.

Last week I went for out-patient surgery at an important Israeli hospital. A few weeks before the scheduled date, I had to appear for a pre-op checkup by an anesthesiologist, nurse, and second opinion MD. While they weren’t checking me for COVID-19, surely if something suspicious revealed itself, they would have called for testing. All was OK.

The day before the surgery, the hospital called, and a nurse grilled me on possible coVid exposure. Fever? No. Cough? No. Exposure to anyone with COVID-19? No. All OK.

The next day I presented myself at the hospital – and the routine temperature checker greeted me. All OK. Then the prep nurse again took my temperature and blood pressure. All OK. Then another anesthesiologist checked me out. All OK.

Then the prep nurse comes back with a long swab.

“We have to do a coronavirus check,” she said.

“But there is no way I have COVID-19,” says I. “We’ve been in virtual self-imposed isolation for weeks.”

“Likely you’re right. But I have no choice.”

“When will you get the results?” I asked.

“But I will be discharged today. So, what’s the point of doing the test?”

She shrugged. “We’ve been telling the ministry the same thing. They still insist. MOH policy. All the hospitals have to comply.” She did the test. I got the results the next day. Negative. No surprise there.

So what could the reason be for all hospitals to be directed to take COVID-19 tests on patients presumptively healthy? And why are we wasting resources? Nursing time? Laboratory time and expense? to perform the few tests that we are doing — on persons highly unlikely to have the disease?

Could it be to dilute the positive figures? Stack the tests with a presumptively normal population? After all, what percentage positive would you like the numbers to be, Mr. Netanyahu?

Another more accurate reflection of the state of the disease is the case fatality numbers. While case numbers (morbidity) perhaps can be obscured or obfuscated, mortality is harder to hide. So, what percentage of people positively diagnosed are dying? Are the death numbers decreasing, or at least not increasing? At the inception of the epidemic and for months afterward, the Israeli Case Fatality ratio (the number of deaths per person diagnosed) was .007. It’s now closely approaching 008. That tells me more people are dying from the disease – or that we aren’t sampling enough people.

As for the most recent stats: For Oct. 25, per Ourdata.org there were 43 deaths reported to the ECDC. Wikipedia’s notes that the MOH reported 37 deaths for that day. For the 27th, no information is available from Wikipedia as of 5pm on Oct. 27th. Ourdata.org reports 56 deaths!- the second-highest number since the epidemic began.

Overall, then, we are seeing a picture that reflects more deaths since the second lockdown began, even as the case numbers receded.

So, what exactly, is the Israeli death count? As of Oct. 27, Wikipedia reports this as 2452 (compared to 2404 reported Oct. 26). The WHO reports it as 2393. So which is it? Are we in better shape now, than before the lockdown – or not? Who knows?  In a real democracy, the press notes the discrepancy and investigates it. Here, the press seems to gobble the manna its fed by the MOH, unquestioned.

To be sure, these numbers reflect some deaths in patients who sickened prior to the lockdown, including deaths from Yom Tov exposures in the Haredi community where multiple sources of exposures presented themselves to each individual. The combined dose may have resulted in more severe cases, or perhaps an older cohort of elderly gentlemen was in shul, exposing each other. Hard to tell. What is critical is that exposures in these communities must be monitored. Treatment on the QT will not eradicate the disease. Opposition to red-city lockdown will not prevent spread to outside communities, which will burgeon as businesses reopen. Learning in the Yeshiva instead of at home will not stop the spread.

The most significant concern, however, is the children.

It is reported that the recommendation to open schools in capsules could not be implemented because Netanyahu claims we don’t have the funds. – at least not for the first and second grades. Maybe that’s not so terrible if all kids aren’t taught in capsules, if, indeed, the pandemic is receding. Alas, it doesn’t seem like it is. How many Co Vid cases do we have? As many as Netanyahu wants it to be, it seems.

So, maybe in our nation, which supposedly values life above all else, we could eliminate some of the excessive ministries, cancel MK drivers, furlough MK pensions to fund capsule education for all our children? Or perhaps we could just pass a budget that would allow us to allocate funds to saving children’s lives? And maybe we can even start publicizing accurate data so the populace can see what is happening.

A final world on freier-dom: Demanding the press checks and double-checks statistics furnished by the MOH is not too high an expectation. But, frankly, and sad to say, it looks like we’ve all been freiered. 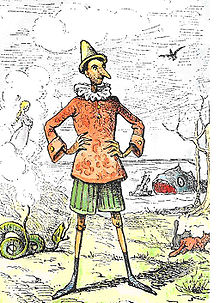