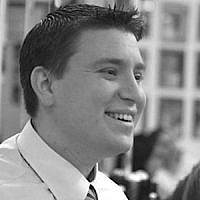 The Blogs
Haim Shalom
Apply for a Blog
Please note that the posts on The Blogs are contributed by third parties. The opinions, facts and any media content in them are presented solely by the authors, and neither The Times of Israel nor its partners assume any responsibility for them. Please contact us in case of abuse. In case of abuse,
Report this post.

The latest round of Israeli-Palestinian violence brought back familiar patterns but two specifically seemed to come to the fore in this particular round.There was a large number of attacks on Jews qua Jews in the US and Europe. And there were more and more Jewish voices specifically among those condemning Israel and blaming the violence entirely on Israel.

These two phenomena, I will argue, are linked.

It is clear that there is a growing camp of anti-Israel Jewish voices. I don’t have a particular problem with this. It makes perfect sense. Zionism was once a radical movement that demanded of its members revolutionary action and deep devotion. It fundamentally challenged the position of Jews in western societies where many felt comfortable. Once upon a time there was a flourishing anti-Zionist movement among Liberal Jews who (rightly) predicted that the creation of a Jewish state would cause non-Jews to question Jewish loyalty to their “home” countries.

The current anti-Israel Jewish camp shares many characteristics with that early anti-Zionist movement. Most of the Jews in that camp feel that Jewishness does not “need” a national element, and that the national element which the Zionists desire to make central to Jewish life is actually something shameful or atavistic.

Nevertheless this growing camp is based on a logical paradox. There are two contradictory founding principles of the Jewish anti-Israel movement.

1) As Jews, we have a greater right to talk about Israel and its crimes, since they affect us, and since Israel claims to speak for the Jewish people.

Many anti-Israel and anti-Zionist Jews do not understand that by holding onto the first principle, that, as Jews, they have the right to criticize Israel to a greater degree than the average person, or are more highly obligated in this, they negate the second set of principles.

When anti-Israel Jewish groups such as IfNotNow, JVP, or Truah claim that they are speaking out AS JEWS against Israel, then they are essentially backing up the idea that Jews are legitimate targets of anti-Israel action, even violence.

One cannot condemn the attacks on Jews in North America, and in particular the recent rise in such attacks as anti-Jewish, and unjustifiable as part of the Israeli-Arab conflict if one holds that North American Jews have special rights to criticise Israel as being “from within” the family of the People of Israel.

Very simply – North American Jews (for the purpose of talking about Israel and Palestine) must be seen as innocent outsiders. As innocent outsiders, who rightly refuse to be victims of violence because of events thousands of miles away, North American Jews have no special place in the discourse over Israel and Palestine. That means that if you are a North American Human Rights organisation (like T’ruah) and you spend half your time on Human Rights violations in North America and half on Human Rights violations in Israel, then Israelis have a right to ask why you are concentrating on Israel. If you aren’t Israeli (unlike the Israeli Rabbinic Human Rights organisation, Rabbis for Human Rights, founded many years prior), then you have no reason to concentrate specifically on Israeli human rights breeches unless one is unfairly singling out Israel. China is a far greater threat to Human Rights than Israel. T’ruah, as an organisation which rejects Zionist claims of Jewish peoplehood and includes anti-Zionists cannot work under the presumption that its criticism of Israel and its government’s actions comes from “within the family”. If it were to, then it intrinsically justifies violent action against Jews in North America as resistance to the Israeli state. This would be morally reprehensible.

When IfNotNow spread anti-Jewish myths about Jewish / Israeli power (talking about the Trump-Netanyahu Regime, implying that Israel runs America), that must be seen as a racist attack from outside on the people of Israel. It matters not whether INN are Jewish, they are not part of the people of Israel.

Jewish Voices for Peace (a peace understood as the removal of Israel from the map) are exactly that – Jewish voices for Peace, but one must understand that those Jews cannot be considered to share any kinship with the people of Israel.

When Israel was about to be founded, it was unclear what the name of the country would be. It was clear that it was a delicate matter. If the country had been called Yehuda, the citizens Yehudim and presumably the translation of that “Jews”, what would the Jews of the Diaspora have done to differentiate between a Jew by citizenship and a Jew by covenant with no relation to the modern state. We went a different way – we went with Israel. And as such, Israel should not speak for the Jews. But at the same time, the Jews (of North America) cannot pretend that they speak from within the family, without following that claim out to its logical end.

It is a deep logical flaw to pretend that Jews speaking from “within the family” about Israel is not a direct justification for attacking Jews for Israel’s crimes.

About the Author
Haim Shalom moved to Israel from Manchester, England, and lives and works in Jerusalem. Having chosen the names "Life" and "Peace", he does his best to promote both. He is a Reform Rabbi in one of Jerusalem's 5 progressive congregations.
Related Topics
Related Posts
Comments