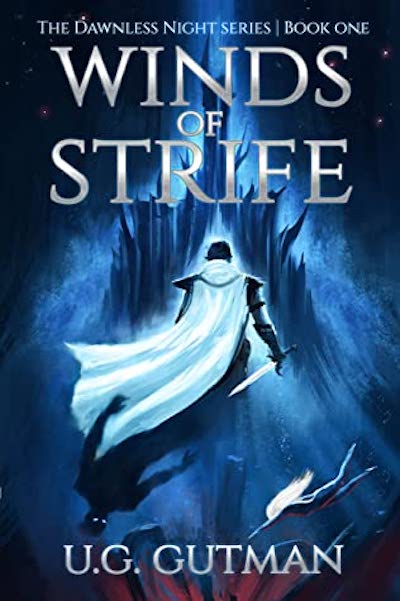 Israel has a well-earned reputation over the decades as a rich culture for novelists some of whom have enjoyed world renowned success. Names like Amos Oz, A.B. Yehoshua, Aharon Appelfeld all come to mind when referring to great Israeli novelists. Perhaps someday the name Uri Gatt Gutman will be added to the list.

Gutman is a young Israeli with a gift for imagination and ability to write in the genre called fantasy fiction. He published his first book Winds of Strife the first of a 3-part Dawnless Night series, just last year which is already earning praise and readership from an international base of fantasy fiction aficionados, who typically tend to be younger readers. Although a native Israeli, born and raised in Jerusalem, Gutman wrote and published Winds of Stife in English making it accessible to a huge market of fantasy fiction readers.

The fantasy fiction genre might be best represented by the Harry Potter series which has sold over 500 million books worldwide in 8 languages. Like Harry Potter Gutman’s Winds of Stife is based in an imaginary world with characters who possess magical powers deployed in various adventures, conflicts and challenges all sparked in Gutman’s fertile imagination. Yet what distinguishes Gutman’s stories is his deployment of his personal background and interest in cognitive science and philosophy which raise what he calls “morally gray” scenarios.

Upon completion of his IDF military service Gutman pursed and earned degrees in Philosophy and Cognitive Science at Ben Gurion University of the Negev with a potential career as a therapist in mind. Fascinated by cognitive science, how the human brain works and specifically the connection of emotions to human behavior. In a recent interview Gutman explained, “emotions play a big part in the cognitive process, I created magical powers linked to my character’s ability to manage their emotions.”

“I took a keen interest in mental disorders in general. That’s what also brought me to a desire to be a therapist, becoming a cognitive scientist and student of mental disorders.

“It’s also something that is very interesting to explore in a fantasy novel. Because it’s a little bit safer writing about mental disorders in a book than what happens in everyday life.”

Readers see how deploying and managing emotions can be harnessed as magical powers to achieve desired results, becoming a clever basis for characters in a fictional world. Figuring out the motivations of the characters is also part of the attractiveness of the world Gutman has created.

Writing Winds of Strife was an 8-year process, Gutman recalled re-writing the book 15 times. Often writing on his train rides back-and-forth from Jerusalem to his army base, Gutman made excellent use of his travel time. One of Gutman’s major inspirations was science fiction writer Brandon Sanderson, who made a visit to Israel to attend the ICON festival in 2019. Gutman noticed the extremely long lines of fans waiting for Sanderson’s autograph which impressed upon him the potential interest in adult fantasy fiction novels.

“The magic system was very prominent in my head for a long time,” he says. “It goes back to me watching Star Wars, there is a pretty famous saying ‘fear leads to anger, anger leads to hatred, hatred leads to suffering’.”

“It occurred to me during high school that maybe emotions like energy don’t go away. They just change minds. And it kind of burned inside me. I really wanted to do something with it to talk to people about it, to write about it,” explained Gutman. “I can use what I have thought about emotions, about how emotions can kind of evolve and change as a basis for a magic system.

“And it can be very cool because people do try to calm themselves when they try to protect themselves. I’m sure many people, when they’re angry, would love to show fireballs in their hand.”

“So, everyone has emotions like that, hatred is very self-destructive.”

Growing up in Israel also informed Gutman’s world-building and character development. When asked if he viewed the society as a morally gray environment, Gatt said, “definitely” referring to well-publicized corruption.

“One character wants what’s best for her boyfriend, but she ends up manipulating things to do that and lying to him as method to do that. And you can see how the good intention is not what’s most important. Sometimes the actions matter more than the intention, so there are different aspects to being morally gray.”

Gutman’s Winds of Strife is available at Dani Sfarim Books in Jerusalem and on Amazon.

About the Author
Ken Toltz began his professional career at AIPAC in Washington, D.C. after attending Hebrew University in Jerusalem. He's a 3rd generation Colorado native, businessman and long-time gun violence prevention activist. After 42 years from his first visit to Israel, in 2019 he relocated his home to Mitzpe Ramon in Israel's Negev. After a year he relocated again now residing in Herzliya. He writes about Israeli politics, relations with the U.S. and the Israeli creative class of writers and filmmakers.
Related Topics
Related Posts
Comments