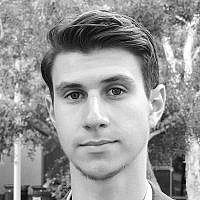 The Blogs
Justin Feldman
From the Jewish Grassroots
Apply for a Blog
Advertisement
Please note that the posts on The Blogs are contributed by third parties. The opinions, facts and any media content in them are presented solely by the authors, and neither The Times of Israel nor its partners assume any responsibility for them. Please contact us in case of abuse. In case of abuse,
Report this post. 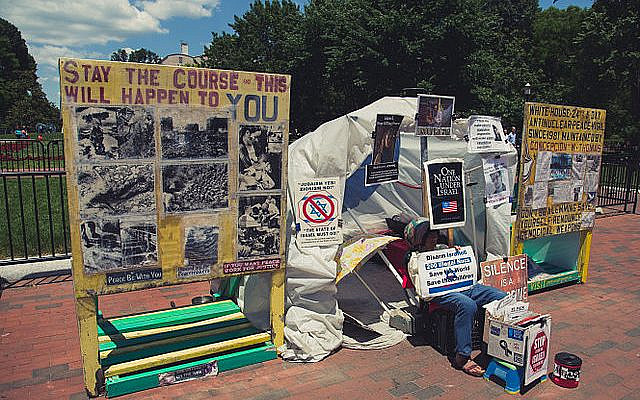 "Protest against Israel..outside the White House in Washington, DC in May 2014." (Tony Webster, WikiCommons).

So, you’re still confused or unconvinced that Anti-Zionism is always antisemitic in all its forms?

In 2020, I wrote a piece titled “8 Reasons Why Anti-Zionism is Always Antisemitism” on what I call the “8 Principles” of Anti-Zionist Disenfranchisement (of Jews).

The point of the op-ed was to present a fool-proof guide on how, in both theory and practice, there are eight different kinds of rhetorical lies that Anti-Zionist arguments weaponize against Jews and every Anti-Zionist argument uses at least one of these lies in order to render Jews powerless again. If it left you with more questions than answers, this article of frequently asked questions and answers is for you:

No, the 8 Principles are assembled in an effort to precisely clarify, define, and specify Anti-Zionist messaging, while distinguishing it from legitimate criticism of the Israeli government. By highlighting how Anti-Zionism categorically functions in theory and practice, we delineate with certainty how Anti-Zionist ideology empirically (in practice), if not always intentionally by the speaker, threatens human rights of the Jewish people — reliant on dis/misinformation.

Non-Zionists present a completely separate range of objectives, ideologies, and interests than Anti-Zionists. This is very important to clear up. Non-Zionists do not demand the destruction of the only Jewish state, but rather pursue a modification of the Jewish State’s style of governance (or take no stance/action towards Israel at all). The difference rests between, for example, saying that you wish Israel embodied “a more religious Jewish state” — as many Haredi (Ultra-Orthodox) Jews have long expressed — versus those who actively advocate for the elimination of the Jewish State completely, thus putting Jews at existential risk (Anti-Zionists) — the handful of statistical Jewish tokens in far-left factions (an estimated 5 to 7% of American Jews).

On another note, the key difference between (religious Jewish) Zionists and (religious Jewish) non-Zionists is the amount of involvement that one takes in order to directly support the state, i.e. conscripting to the Israeli army as broadly mandated for Israeli citizens, in tandem with pursuit of advancing its (religious) modification a.k.a. religious Zionism. Religious or secular, socialist-leaning or capitalist-leaning, whatever type of Jewish state that non-Zionists may be advocating for, if advocating change at all, it is still centered on the state achieving the mission of protection, freedom, and representation for Jews. One can also be apathetic or lack an opinion about Israel and be considered a non-Zionist. The defining feature of non-Zionism is the lack of actively working to aid or harm the Jewish state. If you go about your day as an ordinary haredi Israeli citizen, living on charity to study Torah daily, thus evading military conscription, but you still pay taxes — despite the former, you’re still arguably a non-Zionist. 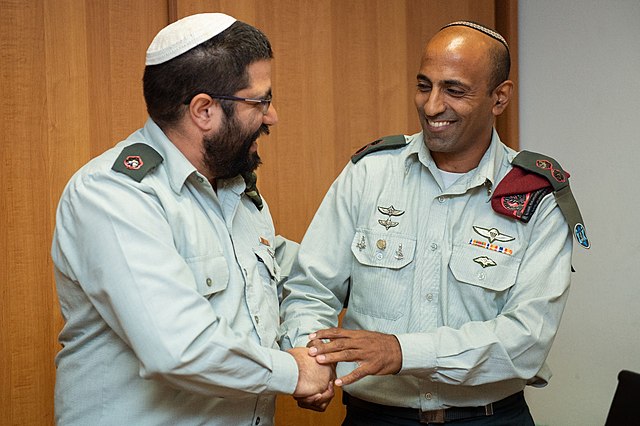 A ceremony to replace the commander of the Israel Defense Forces Haredi management office (IDF Spokespersons Unit via WikiCommons, 2018). A featured example of religious Zionist integration programs in the IDF.

For those who may view Zionism to have achieved its goal and now deem it irrelevant and call for a systematic restructuring of Israel’s government to reach past a focus on its Jewish character towards a more universalist structure, see the following question.

While such individuals, sometimes labeled as “Post-Zionists”, may not be technically calling for the violent destruction of the Jewish state and may even wish to preserve Israel as “a state for the Jews”, they cannot be considered Zionists. No matter one’s intentions, eroding Israel’s definite Jewish character provides the future means for tipping Israel’s democratic base to the will of global majorities (not immune from the virus of antisemitism) who, if given the opportunity, may eventually pose a threat to Jewish existential interests i.e. through immigration (Palestinian “right of return”) and subsequent homogenizing, hostile majority-ruled policy. This includes any state model that removes Israel’s Jewish-majority character, i.e. post-colonial state model or even a binational model (which hasn’t worked pre-1948 in Israel and has certainly led neighboring states in the region like Lebanon, Syria, and Iraq into sectarian chaos when attempted). Contrarily, preserving Israel’s Jewish character through law and practice is a mechanism to preserve Jewish people, their rights, indigenous culture and religion — something especially relevant as the Jewish people continue struggling to recover from and surpass their pre-Holocaust numbers. Zionism, being the belief in and pursuit of reclaiming Jewish safety and self-determination in the ancestral, indigenous homeland of the Jewish people is relevant as a mission at least as long as Jews remain a global minority or as long as antisemitism exists.

This is not to discredit the importance of defending and advancing the rights of non-Jewish citizens in Israel, including Israeli Arabs. On the contrary, it is simply a matter of ensuring that the apparatus of balance, which allows a Jewish democratic state to thrive, is held intact for generations to come. It is under a Jewish-majority state’s leadership, inclusive of equal Christian, Muslim, Druze, and secular participation that political and civil liberties and freedom of religion have been secured for all in the region for the first time in history.

Religious Jewish Anti-Zionists, by the prior outlined standard, are actually quite the anomaly, composed of radical factions, such as the twentieth century-born cult of Neturei Karta. The Neturei Karta, which make up less than 0.1% of the Jewish people, actively campaign for Israel’s destruction and Jewish displacement while aligning as tokens with genocidal enemies that have inflicted harm on Israeli Jews as much as on diaspora Jewry, i.e. the Iranian regime, Hezbollah, Hamas, and other terrorist proxies. Even in the case of such Jewish extremists, the return of Jews to Israel and the restoration of Jewish sovereignty is an eventuality during the arrival of the Messiah (solely under overt Divine decree), that remains intimately part of their belief system. 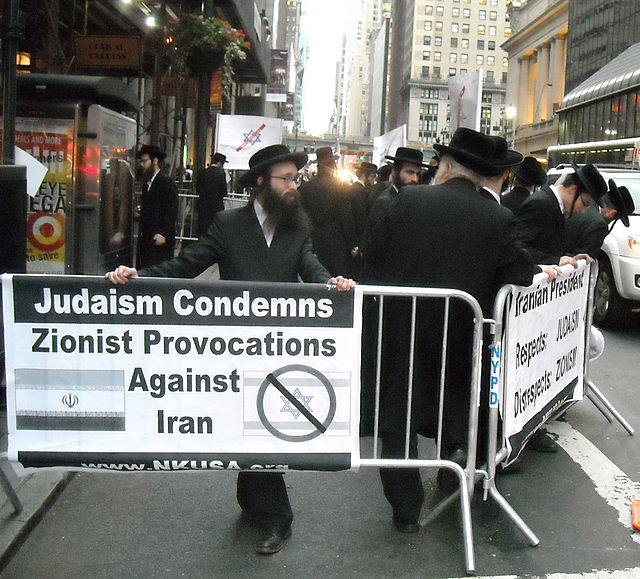 As hundreds of the 613 mitzvot (divine commandments for Jews in the Torah) can only be fulfilled in the land of Israel via the reclamation of Jewish sovereignty, Zionism is inherently part of Jewishness. In fact, dozens of daily, holiday, and rite-of-passage prayers and rituals for every denomination invoke the return from exile to Israel for this sake. That there have been various historic Jewish attempts to achieve this mission of reclaiming power over the many centuries, prior to the modern Zionist movement (invested in sovereignty through statehood), it is clear that Israel is a core element of Jewish identity and heritage. And frankly, without Israel, there would be no Jewish people (originating from the ancient Israelite tribe of Judah – Yehudah).

Anti-Zionism, at its core, desires, and in all cases, empirically creates antisemitic outcomes. Because of the nature of disinformation in Anti-Zionism’s original proliferation (similar to Nazism), i.e. from the former Soviet Union and Arab world and its deep role in shaping the biases of many unknowing ordinary people until the present, we cannot determine that all identifying Anti-Zionists are conscious antisemites. 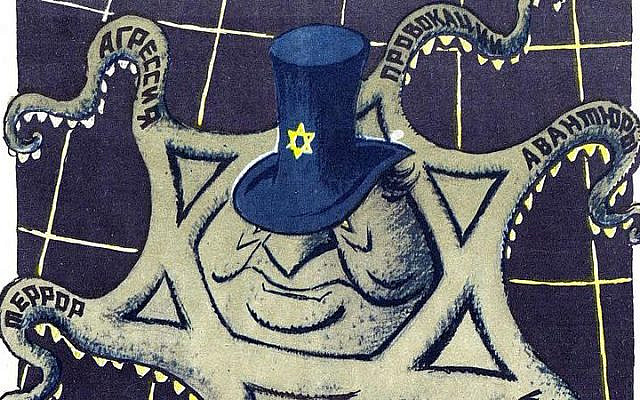 In fact, the volatility and toxicity of Anti-Zionism is within its feigned innocence, preying on masses who have no direct stake in or knowledge of the Middle East or Jewishness, and propagating an antisemitic collection of false narratives in order to convince day to day people that Jewish disenfranchisement is a logical and moral endeavor that will benefit all. Justification for isolation and persecution of the Jewish people by the fringe, enabled by mainstreams, is the natural insidious result over time. Therefore, while intentions do matter, they are not enough to quell or deter the upsurge in antisemitism occurring in societies around the world today. Denouncing, dismantling, and unlearning Anti-Zionist rhetoric, like other underlying and even subtly racist rhetoric in our cultures, is thus crucial.

While the accusatory label of “antisemite” is no light matter, antisemitic implicit bias or discriminatory views are still rampant throughout societies worldwide, denying the validity of Jewish sovereign claims included. Yet, if a person disagrees with a certain premise for Israel’s existence, that doesn’t necessarily connote antisemitism on its own. For example, the belief that Muslims have the right to dominate the Middle East because of Islamic religion may be deemed equally invalid from an international legal standpoint. However, if a person denies Israel’s foundation or Jewish history any legitimacy from internalized lies, that may serve the interest of more expressly antisemitic actors — constituting empirical antisemitism. Conclusively, Israel’s legitimacy does not rest solely (or even primarily) on ancient ties or religious/biblical claims, but on indigenous rights, moral rights to Jewish refuge, the merits of having one Jewish cultural center, Israel’s democracy, the unique ability of the state to protect all faiths’ rights in this region, and beyond.

About the Author
Justin Feldman (Yitzchak Eishsadeh) is the National Activism Manager for the Israeli-American Council Mishelanu and a professional speaker. During his college career, Justin engaged thousands on Israeli history, contemporary political issues, and advocacy strategy as a CAMERA Fellow on campus, a member of the Students Supporting Israel National Committee, and the youngest staff speaker in North America for international non-profit, StandWithUs. Justin is also a StandWithUs High School Internship and Emerson Fellowship alum. In his spare time, Justin enjoys cooking, calligraphy, travel, and graphic design. He graduated from UCLA in 2020 with a B.A. in Political Science & Middle Eastern Studies. You can follow Justin on Twitter @eishsadehy.
Related Topics
Related Posts
Comments