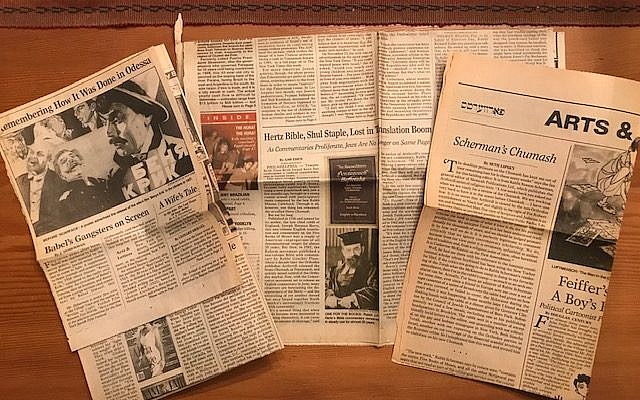 The notice that the Forward newspaper will end its print publication after a 121-year run saddened me. It’s not that I agreed with its current social-political tilt, or had grandparents who devotedly read the original Yiddish edition of the paper as the Forverts. My mourning come from other sources.

First, the news is upsetting because, as a former journalist myself, I hate to see publications close. That applies to any publication. While going all-digital may keep the Forward alive a while longer, the signs are not good. The venerable Village Voice tried the all-digital approach and not even that stripped-down model worked with one of the greatest brand names in journalism behind it.

Second, I subscribed to the English weekly since it debuted in 1990. I greatly enjoyed reading it, as an unpredictable, literate look at Jewish life, with great writers and editors and hard-hitting coverage, such as on Jewish nonprofit agencies. I frequently tore out articles to slip into books. The December 3, 1993 issue had a column by editor Seth Lipsky titled “Scherman’s Chumash,” about the hot-off-the-presses Stone edition of the Chumash published by Mesorah Publications in its ArtScroll series. Mesorah’s general editor, Rabbi Nosson Scherman, and Lipsky traded thoughts about the content and worldview of the volume, which went on to huge success. That article has been in my Stone Chumash for decades. 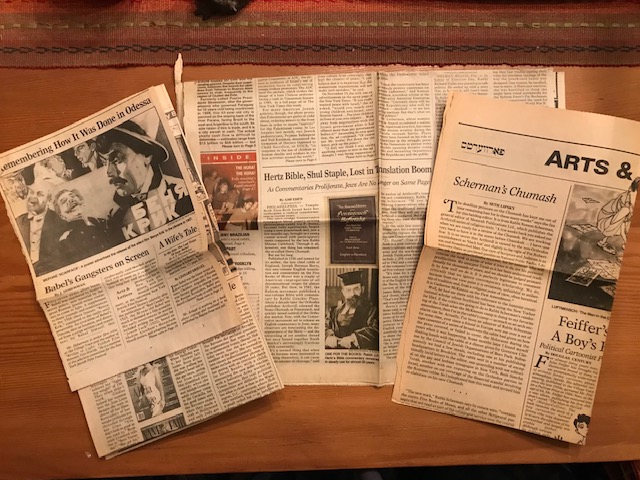 My Hertz edition of the Torah holds an article from December 8, 2000, with the headline “Hertz Bible, Shul Staple, Lost in Translation Boom: As Commentaries Proliferate, Jews are No Longer on Same Page.” Talk about Jewish continuity: this article about quoted none other than Rabbi Scherman about the place of the Stone Chumash in the expanding galaxy of Torah commentaries. The same issue carried the “Tyler, Too” column by venerable union organizer Gus Tyler.

Articles on Yiddish culture also found a welcome place in my library. Bridge of Light: Yiddish Film Between Two World by film critic J. Hoberman carries three pieces: a 1997 article titled “Babel’s Gangsters on Screen” by J. Hoberman himself; a 2001 review of a book on the Moscow State Yiddish Theater, also by the indefatigable J. Hoberman; the 2009 article “The Wisdom of Solomon: Yiddish Theater in Soviet Film,” the Solomon being actor Solomon Mikhoels, murdered at Joseph Stalin’s orders in 1948.

This kind of eclectic, compelling content is getting harder and harder to find in any Jewish publication. We’re the poorer as a community without the Forward to publish it.

The final reason I mourn the loss of the Forward: I wrote for it. Well, I had exactly one article in the Forward, but that counts. The article, “My First Time—Visit to Israel” appeared in the weekly English section in what was still the Yiddish Forverts. I had visited Israel that June, as the Lebanon War started, and wrote up my impressions. The Forward accepted the article, which ran in the Sunday, November 14, 1982 issue that also contained writing by Isaac Bashevis Singer, as I recall (my otherwise-reliable filing system can’t turn up the full issue, only the multiple pages of the article). The article still intrigues me with my 24-year old’s writing style, agog at being in Israel for the first time and extracting every morsel of personal, social and religious meaning from my time there. The essay became a milestone of the state of my Jewish orientation the next time I returned to Israel, 35 years later, and wrote about that adventure for the Times of Israel. 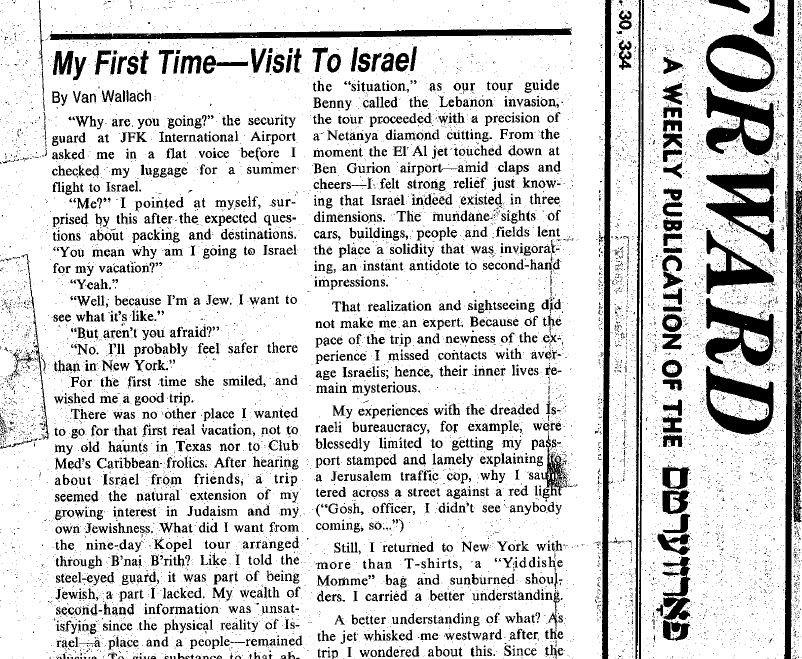 I subscribed to the Forward for 25 years, always re-upping for two-year subscriptions. I couldn’t imagine a week without that jolt of Jewish journalism. In what turned out to be the last months of its existence as a print weekly, I decided a lifetime subscription made more sense than the two-year renewal cycle. Putting my Princeton economics degree to good use, I calculated the discounted present value of a stream of Forward subscriptions for the next 30 years and settled on a fair lifetime subscription price. If Moshiach comes before the 30 years, I told myself, then I could live with that shorter time horizon.

I called the subscription service and made my pitch at a price that would get me the paper for decades and the Forward a modest infusion of cash. That option wasn’t available, which is a shame, but probably for the best. The Forward would have made out like a bandit on the deal, given what’s happening now. I kept my money and instead got a lifetime subscription to the quarterly Jewish Currents for $300. While I’m about 180 degrees opposite that publication’s politics—true to its communist roots, Jewish Currents makes the Forward sound like Brooklyn’s Jewish Press—I like its feisty, uncompromising tone and literary content, so I’m glad to do my bit to support Jewish publications.

By the point when I couldn’t get a lifetime Forward subscription, the paper had squandered my old enthusiasm with its headlong rush into leftist politics, conniptions over every trendy social issue and obsessions with Jewish, semi-Jewish and once-dated-somebody-who-was-Jewish celebrities. The thrill was gone, as it hadn’t been Seth Lipsky’s Forward in decades. I let my subscription lapse after a quarter century. The paper switched to a monthly schedule in 2016 and I never saw an issue in that magazine format. Now even that has vanished.

I still subscribe to the New York Jewish Week, a fast read that’s also pummeled by the turmoil in journalism. Besides Jewish Currents, I also get the quarterly Jewish Review of Books, which greatly engages me with its sprightly literary explorations. The Algemeiner’s website delivers that old-time Zionist religion tuned to my worldview. And Seth Lipsky’s still in the game at the opinion column-oriented New York Sun website. The Sun, by the way, was the last New York daily to which I subscribed, before it closed in 2008.

Still, the Forward held a special place for me. It flowed directly from a Jewish past that, while not my past in any way, resonated with me. Its mix of news, investigations, culture coverage, the Philologos language column and even cartoons made for a weekly treat. I won’t see that kind of print publication again. May the new Forward live long and finally prosper in the new circumstances.