The pandemic’s scythe keeps cutting down lives worldwide. In late January I mourned the loss of Rabbi Abraham Twerski, a revered Hasidic scholar, author and doctor. The Pittsburgh native was 90 and living in Jerusalem. 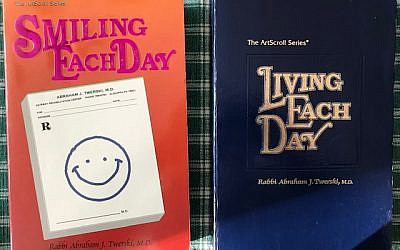 R’ Twerski mattered to me because we have shared a book-based spiritual exchange for almost 30 years. Over that time I returned time and again to his writings, which bring together vast Jewish learning with his work in the field of alcoholism and addiction counseling. He wrote compassionately about dealing with depression and stress, and he proved immensely comforting and insightful whenever I needed him on those issues.

For example, overlapping life crises in the early 1990s overwhelmed my family and me, grinding us down day after day. I found solace in R’ Twerski’s book, Living Each Day, which had thoughts for each day of the year, arranged according to the Jewish calendar. It covered the secular calendar from 1990 to 1996. Each entry had a passage from prayers with additional comments from the scriptures and the sages. I bought it on February 15, 1992, almost exactly 29 years ago. 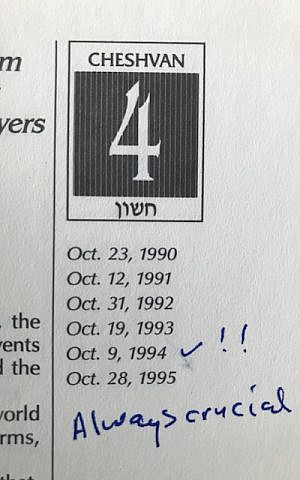 The format was ideal for lifting me out of the shadows of the day into a calmer place where R’ Twerski and his timeless sources could gently guide me. I still have Living Each Day, along with a similar book titled Smiling Each Day for the years 1994 to 1999.

The ongoing dialogue with R’ Twerski came as I checked off the day I read an entry. When his words especially spoke to me, I jotted thoughts about what they meant and the related life issues I associated with them. So on September 30, 1992, R’ Twerski wrote,

As humans, we have the freedom of choice to do good or evil, but we should recognize that except for this choice, there is little else that we really control. Rather than worry and expend endless amounts of energy to manipulate those things that are beyond our control, we would do better to turn them over to G-d and direct our energies to those things we can change.

I wrote next to the passage “but needs to distinguish between worry and grief, sadness over a situation.” In 2021, I continue to relearn the lesson about what I can and cannot control.

On the facing page, on September 19, 1993, during the days between Rosh Hashanah and Yom Kippur, I wrote the poignant phrase, “I’ll try again.”

I return regularly to R’ Twerski’s instruction. My comments form a running commentary as my life circumstances changed—but I remained the same in some ways. In his entry on a statement by the Baal Shem Tov, or Master of the Good Name, R’ Twerski wrote, “It is commonplace to pray for protection from our enemies. We should also pray to be protected from ourselves. Sometimes we can be our own greatest adversary.” In 1997 I wrote, “The trials of our lives!” And in 2007 I wrote, “Still too true.”

Smiling Each Day challenged me to look on the bright side. Each page ended with “Today I shall smile because . . . “ I had some smile-inducing thoughts on January 31, 1994, one of them being “still no snow.” That’s as relevant now as it was in 1994, although in 2021’s snow-clogged winter, I would write “no MORE snow.” 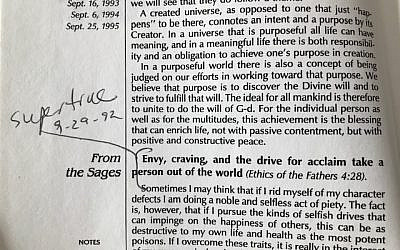 Since I started reading R’ Twerski’s books, I’ve reached a more satisfying stage of life. Humans do have the capacity to learn and evolve, albeit slowly.  Like the title of the song by the eminent philosophers Bob Wills and the Texas Playboys, said, “Time changes everything.” Looking back on R’ Twerski’s writings, I find passages have even deeper meanings now, as I have studied Hebrew and Jewish practice enough to be familiar with prayers and rabbinic sources. On September 27, 1993, 12 Tishrei, I scribbled “Worth thinking about” when R’ Twerski wrote this:

There can be times when the stresses and distresses of life are so great that life itself seems burdensome. At such times, all reasoning and all philosophical arguments may be of no avail, and only complete faith in the absolute benevolence of G-d can help us accept that life itself, even when painful, is a precious gift.

Similarly, the intensity of our distress may make us question Divine benevolence. At such moments, an unfaltering trust in G-d and the conviction that G-d is compassionate—even though we do not understand how and why He allows such things to happen—can enable us to be grateful for life itself.

The commentary concerned a prayer I didn’t know then but I know well now, Modeh Ani: “I thank you, eternal King, for restoring my soul to me with Your great compassion. My trust in you abounds.” I say the prayer in the morning and can read the Hebrew; that hard-won first-hand connection to the text adds so much to what R’ Twerski said about Modeh Ani.

Thanks to guidance of the kind that Rabbi Twerski provided, I eventually moved past the challenges that provoked comments that still make me shudder. Still, new days bring new situations where I need a caring arm around my shoulders.

R’ Twerski’s passing led me to revisit the books, to reflect on his wisdom and legacy. And I’ll keep making notes in this ongoing conversation with Rabbi Twerski, may his memory continue to be a blessing. 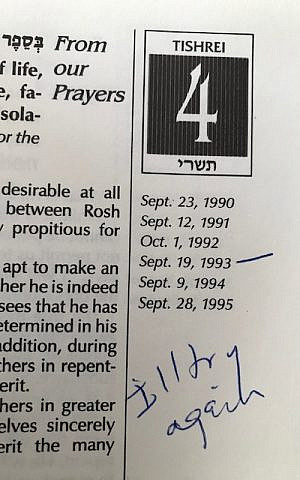