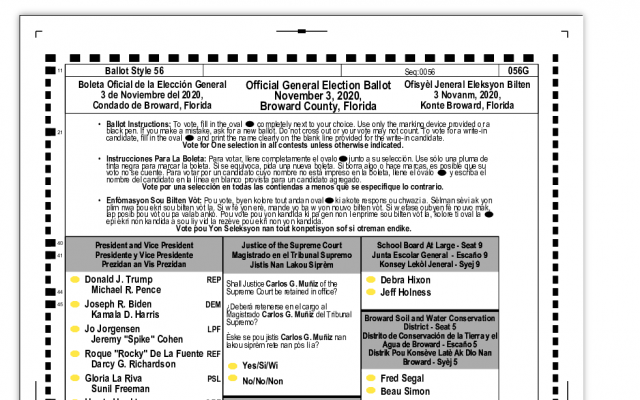 I just voted in Broward County, Florida – absentee from Israel.

And staring at the ballot I feel the same way I did in 2016 – queasy about giving my support to a candidate who will turn my queasiness into full-blown nausea.

That’s why I didn’t vote in 2016. Despite a lifetime or preaching how not voting is still a choice that will put someone into power either way, I couldn’t stomach the thought of knowing I was partly responsible for helping either candidate gain office.

In Florida when voting absentee, you can fill out the ballot online, choose your candidates and print out the ballot with your choices already filled in. Then they give you the option to either mail it or fax it.

The idea of faxing something today seems so… Israeli (our start-up nation still uses the antiquated technology way too much). But in 2016 I went ahead, filled out my ballot and made a choice for president before printing it out.

This year, however, I knew I would follow through. The cliched “too much at stake” is not a cliche in the current reality facing both the US and Israel.

And while I’m sure it angers some Americans that I’m able to influence the election all the way from sunny Tel Aviv, I can’t help smiling knowing these are most likely the same Americans who work tirelessly trying to interfere in the lives of Israelis (unsuccessfully).

“Sucks for you” aside, as a citizen who grew up there for three decades and has consistently filed taxes from abroad over the last one, I make no apologies about my rights as a dual citizen. As I wrote in my first Times of Israel blog article on Dual Loyalty, “it is entirely, absolutely possible to love and be loyal to more than one country.”

Regarding American Jews and Israel in particular, it’s also worth repeating:

Yet now I’m faced with that kind of dilemma across my ballot thanks to the Sophie’s choice between Republicans or Democrats (in this case, inverted to the negative) – in many cases, what seems better for Israel does not seem better for America.

If we apply the Ronald Reagan litmus test of “are you better now than you were four years ago,” there is little question that Israel’s position in the world under a Republican administration is more comfortable, more protected and more enhanced than it was in 2016, no matter how many “experts” who don’t live here try to claim otherwise.

Fresh off historical peace agreements with the UAE, Bahrain and soon-to-be Sudan, with upgraded commitments to ensure Israel’s military edge, I feel much better regarding the Iranian nuclear threat than I did in 2015 when the disastrous six-nation nuclear deal was signed.

The rest is commentary.

Sure, there’s also recognizing Jerusalem as Israel’s capital, the Golan as Israeli territory and finally following through on moving the US embassy, but truth be told these events are not felt on the ground. Little has changed besides a few signs going up and there’s no guarantee they won’t be taken down in the future.

If we’re filling out a report card there are also areas worthy of criticism for being short-sighted and driven by grossly political motivations (on Israel’s side most of all), such as the flirtation with annexation. Plus, the damage done to Israel’s reputation as a result of its sometimes-too-close alliance with an administration viewed with intense, visceral hatred by much of the world – and at least half of America – may very well boomerang in the not-too-distant future.

However, there’s a fair argument to be made that those who would punish Israel for securing its national interests under the current administration are the same people who would punish Israel under any administration. And the polarizing nature of our current reality has actually increased the volume of Israel-supporters in our region – the one that matters most – knocking down what seemed like the impossible first domino that allows all the others to come out of the blue-and-white closet.

The rapid implementation of business deals, direct flights and vocal support from influential Arab leaders are truly big wins for the Israeli people that will pay dividends for decades to come. The feeling on the ground here is palpable and much preferrable to the constant effort to “show daylight” employed by the previous Democratic administration.

As an Israeli I can’t help feeling better off today than I was four years ago as it pertains to the US relationship (much less so in regards to our own dysfunctional government).

Well I’m not on the ground so I can’t say with certainty, but it seems to me like it’s all turned to shit.

The most fundamental expectation from one’s government is to keep them safe. With the dangerous level of violence and vitriol plaguing the country from all sides, there is no question that Americans today are less safe than they were four years ago.

And that’s without the coronavirus being politically kidnapped and painfully mismanaged compared to virtually any country in the world, developed or not.

Maybe it’s the Israeli in me, but if you don’t have a feeling of personal security than nothing else matters when it comes to the issues. Even if you’re better off economically, it doesn’t seem worth it if you need to spend your dividends on an arsenal of weapons just to feel safe walking down the street.

The problem is I don’t believe it will get any better with a change in government. Although it’s easy to point out right-wing contributions to America’s freefall into chaos – many deserve credit for lighting the spark – their left-wing counterparts are no less guilty in keeping the flame alive.

And we haven’t even mentioned antisemitism. From right-wing Jew-haters shooting up synagogues to left-wing Jew haters cleverly disguising themselves with Corbynite costumes, American Jewry is in existential danger no matter who’s in charge.

Even if I was voting strictly “as an Israeli” the choice isn’t as clear-cut as I made it seem since I’d still be voting as an Israeli Jew. To ignore the fate of fellow Jews anywhere in the world is the least Jewish thing I can possibly think of.

So, who did I vote for in the end?

What’s been released into the populace cannot be tamed by simply placing a nice guy in charge at the top. It may alleviate the symptoms temporarily, but the current instability Americans are experiencing is severe, omnipresent and deeply ingrained in the country’s DNA.

If America is going to recover from the outbreak of madness ailing its citizens, it will require nothing less than a sea change in behavior by Americans themselves – an acceptance of “the other” based not on superficial expressions of political correctness, but substantial recognition of other political opinions no matter how offensive.

This does not mean acceptance of extremism, racism, discrimination or any other behavior which expresses itself in physical acts.

It does mean differentiating between thought and expression, accepting that you can’t control what other people think by simply canceling them into oblivion, for no other reason than it just doesn’t work. It won’t stop them from thinking it.

It only ensures they will cancel you next.

Funny enough (but not really), fifteenish years ago I wrote a song about the decline of America. What sparked it was the fascination with reality TV I observed taking place. I couldn’t understand why anyone would want to waste their precious time on earth watching other people live, and while I hold absolutely no judgment against those who do (I waste precious time in many other ways), I still for the life of me don’t get its appeal.

What I did get, however, was its corrosive nature on society. The voyeuristic exercise of watching other people experience life’s full range of emotions – almost always the most negative ones – while completely numbing one’s self to their own human reality was not a good harbinger of things to come next.

In other words, it will fall on Americans to behave.

FATE OF THE UNION

About the Author
Yoni Leviatan is a British-born, American-raised, Israeli-blooded musician, producer, marketer, presenter and part-time political commentator who loves to think out loud. Especially about Israel. Originally from Coral Springs, Florida, Yoni has been living in Tel Aviv since 2009, returning to the land of his parents and grandparents and ancestors before them. Click to watch his videos. Click to hear his music.
Related Topics
Related Posts
Comments