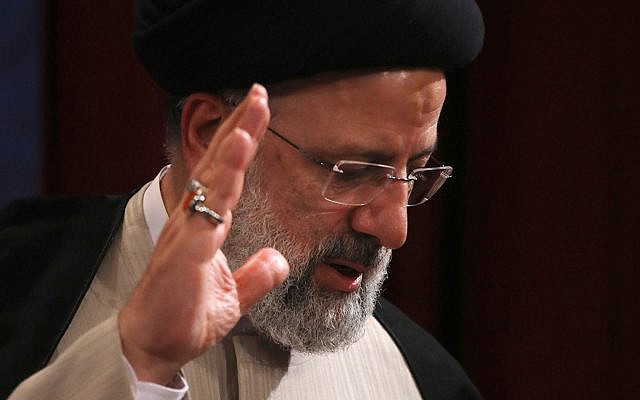 Nowadays, the mullahs in Iran celebrate a sham event of election which was similar to a circus. the mullah’s regime or “the most corrupt and disgraceful government of Allah on earth with their pure Muhammad Islam and the representative of the  imam of the time“, now have a new president.  Alas, Iranian regime will shape a junta under the cover of mullah’s tyranny! surely, American diplomacy with this mullah’s regime and new president is an absurd approach.

all of the political observers know pretty well that polling stations of Iran’s clerical rulers were empty and turnout in Iran sham election was microscopic. moreover, the Iranians boycotted the Islamic fascist republic! because Iranians do not want Raisi, a hard line judiciary chief with a brutal record on human rights.

consequently, the West should learn that, there is no real reformist inside Iran. additionally, reformists and hardliners are two sides of the same coin. they are very closely related to the tyranny of mullah’s unreformable regime in Iran, although they seem different because of the fake propaganda of the western media!

however, Iran hardliner wins rigged election. Surely, Raisi was appointed not elected! the so-called reformists endorsed him shamelessly! almost everyone knew the results long time ago! preposterously, Khamenei engineered to facilitate Raisi’s elevation. Raisi, whose career in Iran’s judiciary has intersected with the bloodiest episodes of domestic repression. the main question is this :but the main question which raise in mind is about Raisi’s brutal record, is it  important for the US and the West? certainly, the civilized world do not want to negotiate with a criminal killer.

By clearing the way for Raisi to win, Khameenei and mullahs endorsed their man to took control of the presidency; and they sent a clear message to the the world for shaping the new era of tyranny in Iran which is mix with Junta.  remarkably, there’s much to be scared about Raisi. he is a ruthless slayer. in a recent news conference, he ridiculed while condemning opponents to death. Raisi truly does represent the Islamic republic and Islamic Caliphate in many ways. once more, all US agencies should consider this point that : American diplomacy with the illegitimate outlaw regime of mullahs is pointless!

If president Biden accelerate his diplomacy in order to strike a deal with this notorious criminal Mullah, it will only confirm naivete to the reality of the Islamic “republic” or caliphate of a Shia’ mullah.

from realistic point of view, as a routine, Raisi will endorse the terrorist operations of IRGC and its main branch which Quds force and the internal suppression by IRGC. the malign activities of IRGC will be in borders of the USA and at the backyard of US in the western hemisphere. now, directors of intelligence in  CIA and FBI will monitoring new stream of events in Raisi’s Government and their inactive cells inside the soil of the USA.

even though, the FBI “works closely with its partners to neutralize terrorist cells and operatives here in the United States, to help dismantle extremist networks worldwide, and to cut off financing and other forms of support provided to foreign terrorist organizations”.

acceptably, “The FBI is committed to remaining agile in its approach to the terrorism threat, which has continued to evolve since the September 11, 2001 terror attacks”.but, the threat of  terrorist groups affiliated to Iranian regime also remains persistent overall, with a verity of actors which committing crimes in furtherance of violent agendas”.

furthermore, The FBI’s Joint Terrorism Task Forces, or JTTFs, are in front line of defense against terrorism, both international and domestic. surprisingly, they are concern about the dark cells of IRGC and Quds force and their malign activities inside the US during the era of Raisi.

It is possible that agents of the IRGC and the MOIS had access to some of American servicemen on US soil. Though the catching of undercover agents is a very difficult task, the FBI managed to detain several Iranian agents from 2017 through 2021. According to the interview with the MOIS minister, the IRGC and the MOIS placed sleeper cells on US soil prior to 9/11 and also recruited journalists and students.

beside talking about “the dark past of Iran’s new president” and “the dark future of Iran with Raisi’s Junta-Religious Government, this is important to consider the future of Iran’s crisis in the Middle East. notably, the main mission of Raisi before the death of Khamenei is repeating another atrocity inside the soil of the USA similar to 9/11 by endorsing a group such as Hezbollah or Al Qaeda or other members of Transnational Terrorist Network.

in reality, most of the agencies inside the US intelligence community such as FBI and CIA will be very vigilant and sound the alarm about the clandestine activities of criminal groups affiliated to IRGC Quds force which have been activated by raising Raisi with his bloody hands . Raisi was a member of notorious “death commissions” which slaughtered at least 5,000 political prisoners under the orders of  Khomeini in 1988. audaciously, he has no regrets about his past actions.

bluntly, Raisi also said that he would not meet with president Biden. so, it means that It’s not a messaging or image problem. it means using American diplomacy with the illegitimate outlaw regime of Iran is preposterous. Raisi has already made it very clear that this will not be on the table of negotiation in the future. this important point should be emphasized, he does not like to solve any problem in the US-Iran conflicts. therefore, he will reject any diplomacy. he rejected  to talk about Terrorism, Ballistic Missiles program and nuclear proliferation with the West.

In a more nuanced approach, things look worse now in era of Raisi than in prior periods of crisis.  as well, by emergence of Raisi, it will be the out-flowing of a new wave of radicalism, militarism, Glorification of Violence, terrorism, and *Khomeinism in the region! this is an undeniable reality on the ground!