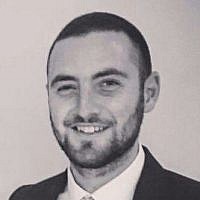 We don’t really believe it will happen.

That Israel, within a few seconds, will be pulverized by a nuclear bomb is unfathomable. The scene is simply too heinous to comprehend. Such an event is so dark and disturbing that it exists only in the deepest realms of torment and horror. As such, healthy people don’t allow it to enter their psyches.

And so, we keep this poisonous scene far away from our consciousness — where it belongs.

In order to keep it there, subdued and out of our realities, we tap in to a wide array of arguments and beliefs — many of them convincing — that solidify this conviction, even if deep down, we don’t necessarily agree with them:

“The fear of retaliation by Israeli nukes — a parallel of the Cold War dynamics of mutual fear — prevents it from happening.”

“The Iranian regime is all words but no action.”

“The powers that be will control the situation.”

While we convince ourselves intellectually that “everything will be alright,” that “the Mossad will take care of it,” that “God will intervene” or that “they won’t bring themselves to push the button,” a lingering question sometimes gnaws at our minds: What if it actually does happen? What if, like the histories of anti-Semitic lunatics and radical Islamic martyrdom suggest, Jews will be targeted even if it comes at a nation’s own jeopardy?

It only takes the push of a button, after all.

Many Jews return from Poland with a defining memory.

For my mom, it is the enormous pile of human ash and bone at Majdanek; for a friend on my tour, it was seeing his exact initials and surname on a confiscated suitcase displayed at Auschwitz. For many others, it is the sight of a bathtub right next to the crematorium’s ovens — which SS officers warmed with the heat of burning corpses.

Mine was much more subtle.

Mine was walking out of the bus, having just arrived at Auschwitz, and seeing the fences. As far as the eye could see, they stretched out into the distance, and rolled over the grassy hills.

What was it about simply seeing those fences that got to me?

For years before that moment, the Holocaust was a theory that I couldn’t believe. Sure, I had learnt about it, but I never believed it. I couldn’t. It was too evil to fathom.

I learnt about malnourished Jews being herded into lines, stripped naked in sub-zero conditions and gassed. I had heard about the scratch marks in the gas chambers.

I heard about overcrowded, 3-day train-rides in cattle cars with a single bucket in the corner for ablutions.

But I couldn’t comprehend any of it. This was the stuff of tortured nightmares and profound terror. This did not belong in reality as I knew it. The demented lunacy of it all was simply not part of my vocabulary.

And then I saw the fences.

The Holocaust is something I can’t comprehend; fences are something I can. The Holocaust defied logic; fences follow simple logic. That’s what was so powerful about seeing them: that same fence was at once both something that could, and could not, exist: a remnant of immense demonic horror, and yet at the same time, just a simple fence.

This is precisely the danger of the Iranian threat: It is simultaneously utterly implausible and coldly realistic. Yet we continue to downplay the blatant promises of Iran’s leaders to annihilate Israel, just as European Jewry called Hitler’s anti-Semitism “the ramblings of a deranged populist.”

When lunatics, immersed in an ideology that glorifies their own death, who deny the Holocaust and openly threaten a new one, who spread terror across the world and hang gays in their streets — when these people have the means to fulfill their distorted aspirations of anarchy — we should be alarmed.

I am not arguing that a nuclear Holocaust will happen. I am only desperate that laymen and policy-makers alike, will acknowledge that it can happen — a necessary first step that, unfortunately, many are still yet to take.

Naivety is a luxury that we simply cannot afford.