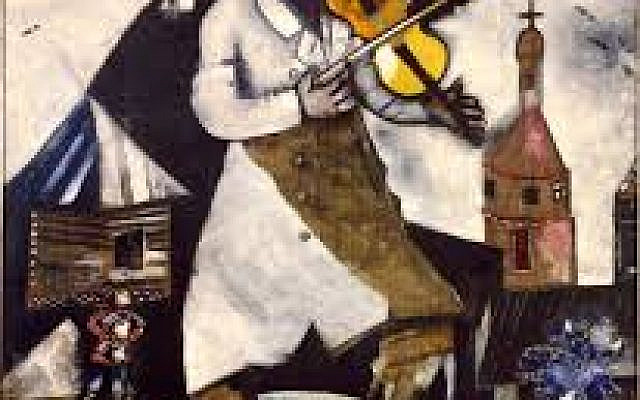 The Chagall painting Fiddler was named after

“Fiddler On The Roof”; when we think of this show what comes to mind?  Memorable music, incredible choreography, amazing acting and Jewish history in all it’s painful glory.  Now is our chance to see it again in Jerusalem!

Opening this Thursday night The Beit Hillel Theater Workshop will be presenting “Fiddler on the Roof” at the Rachel Simon Hillel Theater at Hebrew University. The theater’s first production took place over three decades ago and was actually “Fiddler on the Roof” as well. This time around in a re-designed comfortable theater the talents of both experienced actors and novices, Israelis and Anglo Saxons, university students, and older adults will be joining talented forces to bring us an unforgettable experience.

When asked why Fiddler was selected as this year’s production, Michael Berl, the workshop’s Founding Director replied, “It matters little that the story and songs are so famous. Fiddler begs to be performed. It transmits a critical message at a point in time when anti-Semitism and assimilation are rampant. It’s the perfect choice at a very imperfect time for Jews all over the world. It touches on themes more relevant now than ever i.e. tradition, ideology, family values, intermarriage, assimilation, anti-Semitism, and modernity. The challenges presented throughout the play are still the challenges of Jewish life today.

When first staged in 1964 it was the beginning of the “breakthrough movement.”  We were all discovering who we were and how we can break out of our family and customary molds to be free of traditional constraints.  The women’s Liberation Movement, racial unrest, demonstrations against war and more.  “Fiddler” dealt with so many issues relating to these struggles.  Sholem Aleichem, whose stories were the basis of this wonderful show spoke about the tradition of matchmaking.  The song written for the show about matchmaking sarcastically cites the lack of choice for a decent match.  In the movie “Fiddler; Miracles of Miracles” they show a black and white short movie depicting hundreds of poor Jewish women dressed in wedding dresses standing in line at the dock waiting to be chosen by a would-be matchmaker lifted one by one by a crane onto a ship to be sold into brothels.  Women were offered to whatever match would afford the father the richest dowry. Basically, if you were poor, you had little options.

Tevye’s daughters all wished to be in control of their destination and to marry for love.  Tevye was asked to accept the matchmaking tradition to allow them to marry for love.  The most painful scene in the film was hearing from Golda, his wife, that his youngest daughter, Chava, had married her Christian lover without their knowledge or permission.  He sadly says to Golda she is dead to us and then breaks out in song about his little bird who everyone loved who is now dead to him. I have tears in my eyes just remembering his face.  Interestingly,  even though Tevye and Golda were married in a traditional fashion through a “shidduch” (matchmaking) Golda is a strong figure in the house and seems equal to Tevye in the decision-making process of the home.

Jerry Robbins, the choreographer, carefully researched and outrageously executed the choreography.  Robins, AKA Jerome Robinowitz, was far from being connected to his Jewish roots.  Many considered him a traitor for his cooperation during the McCarthy era where under duress of being turned in for being gay he gave over seven names of potential communists.  For this reason, Zero Mostel hated him which made their cooperation challenging.  With Robbin’s reputation for staging shows such as West Side Story, the producer Harold Prince asked him to work on Fiddler.  The famous bottle dance was choreographed after Robbins attended a Hassidic event with Prince and watched a dancer balancing a bottle on his heard.  Robbins excitedly returned to the set to stage a group of men dancing the Russian Kozachok dance with bottles on their heads.  The producer explains that like the balancing of a bottle on one’s head when dancing it is portraying the challenges of marriage where one is asked to keep a balance of wills of each of the partners. He also cites that wild dancing with traditional music seems to depict communication with God.

Much of Fiddler was influenced by the famous Jewish Russian-French Jewish artist, Marc Chagall, whose whimsical depiction of life in the Shtetl inspired the name “Fiddler on the Roof” where originally it was slated to be Tevye.  His paintings also influenced the staging of Anetevka where all of the homes in Chagall’s paintings have windows facing each other showing the close-knit communities during this time in the shtetl.  The famous painting of the Fiddler on the Roof seemed to demonstrate how even through the toughest times the spirit of the Jewish people remains.  Even in the show, the fiddler is seen following  Tevye during his hardest times almost mocking him yet urging him to never give up hope.

“Fiddler on the Roof” was the longest-running theatrical production on Broadway until “Grease” hit the stage with over 3,000 shows in ten years. When the film version was released in 1971, directed and produced by Norman Jewison, who by the way was not Jewish, and Stein it was after the Six-Day War and the image of the Jewish people had changed to a tough unbeatable strong nation.  With this in mind, the producers decided that Tevye should be played by an Israeli and chose Chaim Topol who had played the role of Tevye in theatrical productions in London. The film became the highest-grossing film of 1971 receiving eight Oscar nominations, The theatrical production is actually performed every day of the year somewhere in the world!  From Thailand, Japan, Europe, Israel to the U.S. and Canada and more, this show represents issues that everyone can relate to from poverty, forced marriages, women’s liberation, refugees, prejudice, tradition and more.

In today’s world, we all seem to be searching for meaning and connection.  For those of us living in Israel, we understand this quest for meaning. I’ve heard it said that overseas we are chasing meaning. Here in Israel, meaning is chasing us!

The opening of the show is Dec 19th.
For tickets: https://buff.ly/2oItw3v
For more info: fiddlerhillel@gmail.com.