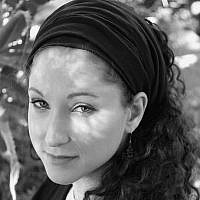 The Blogs
Sacha Gorelik
Apply for a Blog
Advertisement
Please note that the posts on The Blogs are contributed by third parties. The opinions, facts and any media content in them are presented solely by the authors, and neither The Times of Israel nor its partners assume any responsibility for them. Please contact us in case of abuse. In case of abuse,
Report this post.

My day is usually spent in front of my computer, working on my startup and running around after my two little boys aged 3 and 1. This day however was a little different. It all started with an invite on Facebook to a Musical, Art and food tour of Tel Aviv. And against all of my natural inclinations, I actually clicked going. My finger may have said yes but my mind was like, but you have work to do, and the kids to look after and who said you could go out and have a good time?

Turns out the timing was perfect the kids were in Gan and I left bright and early to meet the group by the Jaffa clock tower. I figured this would make some good blogging material for my website and maybe I would meet some people. Turns out nobody showed up, and there was me running like an idiot because I was two mins late. My English punctuality will never go  away no matter how long I stay in this country.

Well Doron of Green Oak tours was nice enough to take me on a VIP private tour. To my surprise, I had actually never heard of most of the places let alone seen  them. We started off on the old train tracks that were built 1892, and ran all the way to Jerusalem. Apparently they are the narrowest tracks in the world, made only one meter wide. As we began to follow the old train lines, Doron played an old train song that really brought the moment to life and you could imagine that train puffing down the track, on its 6 hour journey to Jerusalem.

We then walked through the Noga compound, which I had never even heard of. Home to many artists, actors and musicians. Our next stop was the German/American Colony, where I discovered some pretty interesting facts about some pro Nazi Germans that were living in Tel-Aviv..

Well, I enjoyed my private tour, strolling through the old neighborhoods of Tel Aviv and really feeling history come to life with theme music accompanying us at different landmarks. Like the neighborhood of Neve Tzedek, the first cinema in Tel Aviv and other locations.

Meanwhile, I was a little distracted by the fact that time was ticking and I did indeed have things to do. Probably like those people who didn’t show up, I guess they just have super busy lives.

As the tour came to an end, we made our way to the Levinksy market, for some tasty tasting time! Delicious burekas, Olives and a really special drink known as “Gazuz”!

At that point, as I enjoyed the delicious treats, I actually started to feel genuinely concerned with these poor souls who missed the trip. Maybe they are having  girlfriend problems or family troubles, who knows, maybe the prime minister of Israel called and asked to get a cup of coffee and discuss foreign policies. You just don’t know.

Either way I was glad that I showed up, almost on time to enjoy a wonderful tour of Tel Aviv with Green Oak tours. And now play time is over its back to work .

About the Author
Sacha Gorelik holds a BA in social sciences, does freelance translation and is also a former gymnastic coach. The Sabra patch is her third baby (after two little boys). It is an online marketplace for Israeli artists and craftsmen to sell their handmade products to an international audience. People know Israel as the startup nation- her goal is to introduce people to its creative and cultural people as well.
Related Topics
Related Posts
Comments