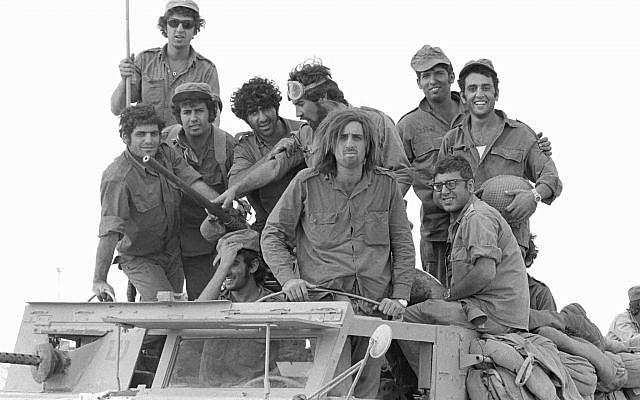 Next year will mark fifty years. Fifty years ago, as a young, almost twenty-three-year-old, I had the experience of a lifetime.

Was I a foolish idealist? Perhaps. I had wanted to be “kravi,” a warrior soldier. I had wished for a combat unit. I excelled and had all of the recommendations that accompanied that excellence. Although assigned to guard an IDF intel unit and fully aware of what was happening “de facto” in front of my eyes, nothing prepared me for the brutality of what was to come a few months later, Yom Kippur, October 6th, 1973. Nothing.

The sounds, the deafening roar of low-flying fighter jets, the explosions of artillery and mortar shells all around, the firing of my own weapons. The smell, cordite and death, fire and destruction smoldering everywhere, along roads and fields. The sights, yes, those sights, leaving indelible imprints on my memory to this very day.

And yet, the war itself prepared me for my love of peace. After countless days in Syria, after a new call to duty to become a tank commander, after so many deployments to Israel’s southern front, the Sinai at first, later Egypt and the new border, and then the Gaza Strip and Gaza City itself, all that prepared me for the love of peace.

I served with farmers, kibbutzniks like myself, and like myself watched as we collectively allowed our idealism to slip away. I served with small-town entrepreneurs, small business owners, calculating their economic losses while they bravely defended the homeland. City dwellers, bankers and professionals, CEOs and police detectives, we all wore green and we all came when we were called. And with our own eyes, we saw the dire poverty within the Strip and the contrasting opulence of the villas in Gaza City.

And then Hebron, where some residents of Kiryat Arba went on nightly excursions to vandalize Palestinian property. And, the next morning it was our small two-jeep patrols who would pay the price, having rocks and Molotov cocktails hurled in our direction.

Yes, the Yom Kippur War, fifty years less one ago, prepared me for all that and prepared me for peace. Do not mistake my love of peace. I remain a hawk when it comes to dealing harshly with those who wish to harm the citizens of Israel. Do not mistake my love of peace for weakness in the face of terror. I have seen it. I have experienced it. I have lost dear friends to terror.

I yearn to hear the sound of the sirens, long wails of pain and sorrow, each and every Yom HaZikaron, allowing me, and us, to grieve and remember that peace is so very precious. The Yom Kippur War prepared me for all that, and more.

I return to Israel regularly, to be with my family, to enjoy my home in Zichron Yaakov. And, I will be back a year from now, to stand with those of us who are left, to remember, to honor, to declare my love of peace because of what I experienced and saw five decades ago.

About the Author
Born in Israel, Yuval emigrated as a baby to Austria and then Canada. He returned to live in Israel in '71 until '91. His military service was in Golani Brigade's 13th Battalion (including Yom Kippur War) with reserve duty as a tank commander and later a liaison officer in the IDF Liaison Unit. He now resides both in the US and Israel, Maryland and Zichron Yaakov respectively.
Related Topics
Related Posts